V, or v, is the twenty-second and fifth-to-last letter in the modern English alphabet and the ISO basic Latin alphabet. Its name in English is vee (pronounced /ˈviː/), plural vees.[1] 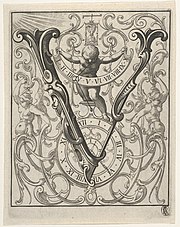 Late Renaissance or early Baroque design of a V, from 1627 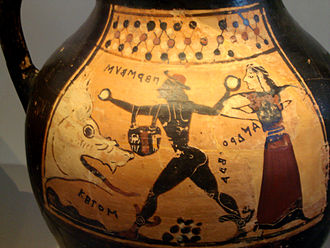 Ancient Corinthian vase depicting Perseus, Andromeda and Ketos. The inscriptions denoting the depicted persons are written in an archaic form of the Greek alphabet. Perseus (Greek: ΠΕΡΣΕΥΣ) is inscribed as ΣVΕΣΡΕΠ (from right to left), using V to represent the vowel [u].

The letter V comes from the Semitic letter Waw, as do the modern letters F, U, W, and Y.[2] See F for details.

In Greek, the letter upsilon "Υ" was adapted from waw to represent, at first, the vowel [u] as in "moon". This was later fronted to [y], the front rounded vowel spelled "ü" in German.

In Latin, a stemless variant shape of the upsilon was borrowed in early times as V — either directly from the Western Greek alphabet or from the Etruscan alphabet as an intermediary — to represent the same /u/ sound, as well as the consonantal /w/, num — originally spelled NVM — was pronounced /num/ and via was pronounced [ˈwia]. From the 1st century AD on, depending on Vulgar Latin dialect, consonantal /w/ developed into /β/ (kept in Spanish), then later to /v/.

During the Late Middle Ages, two minuscule glyphs developed which were both used for sounds including /u/ and modern /v/. The pointed form "v" was written at the beginning of a word, while a rounded form "u" was used in the middle or end, regardless of sound. So whereas "valour" and "excuse" appeared as in modern printing, "have" and "upon" were printed as "haue" and "vpon". The first distinction between the letters "u" and "v" is recorded in a Gothic script from 1386, where "v" preceded "u". By the mid-16th century, the "v" form was used to represent the consonant and "u" the vowel sound, giving us the modern letter "u". Capital and majuscule "U" was not accepted as a distinct letter until many years later.[3]

In English, special rules of orthography normally apply to the letter V:

Like J, K, Q, X, and Z, V is not used very frequently in English. It is the sixth least frequently used letter in the English language, with a frequency of about 1.03% in words. V is the only letter that cannot be used to form an English two-letter word in the Australian version of the game of Scrabble.[4] C also cannot be used in the American version.[5]

The letter appears frequently in the Romance languages, where it is the first letter of the second person plural pronoun and (in Italian) the stem of the imperfect form of most verbs.

Name in other languages

In Japanese, V is called a variety of names originating in English, most commonly ブイ [bɯi] or [bui], but less nativized variants, violating to an extent the phonotactics of Japanese, of ヴィー [viː], ヴイ [vɯi] or [vui], and ヴィ [vi] are also used. The phoneme /v/ in Japanese is used properly only in loanwords, where the preference for either /v/ or /b/ depends on many factors; in general, words that are perceived to be in common use tend toward /b/.

In Chinese Pinyin, while ⟨v⟩ is not used, the letter ⟨v⟩ is used by most input methods to enter letter ⟨ü⟩, which most keyboards lack (Romanised Chinese is a popular method to enter Chinese text). Informal romanizations of Mandarin Chinese use V as a substitute for the close front rounded vowel /y/, properly written ü in pinyin and Wade–Giles.

In Irish, the letter ⟨v⟩ is mostly used in loanwords, such as veidhlín from English violin. However the sound [v] appears naturally in Irish when /b/ (or /m/) is lenited or "softened", represented in the orthography by ⟨bh⟩ (or "mh"), so that bhí is pronounced [vʲiː], an bhean (the woman) is pronounced [ən̪ˠ ˈvʲan̪ˠ], etc. For more information, see Irish phonology.

This letter is not used in the Polish alphabet, where /v/ is spelled with the letter ⟨w⟩ instead, following the convention of German. In German, the letter ⟨v⟩ sounds like /f/.

In the 19th century, ⟨v⟩ was sometimes[when?] used to transcribe a palatal click, /ǂ/, a function since partly taken over by ⟨ç⟩.[citation needed]

Descendants and related letters in the Latin alphabet

V is the symbol for vanadium. It is number 23 on the periodic table. Emerald derives its green coloring from either vanadium or chromium.

v, v., and vs can also be used as an abbreviation for the word versus when between two or more competing items (Ex: Brown v. Board of Education).