From Encyclopedia Britannia
Jump to navigation Jump to search
For other ships with the same name, see USS Birmingham.

USS Birmingham (CS-2/CL-2), named for the city of Birmingham, Alabama, was a Chester-class scout cruiser, reclassified a light cruiser in 1920. Entering service in 1908, the ship became known for the first airplane takeoff from a ship in history in 1910. During World War I, Birmingham escorted convoys across the Atlantic. The cruiser was decommissioned in 1923 and sold for scrap in 1930.

The cruiser was laid down by the Fore River Shipbuilding Company at Quincy, Massachusetts on 14 August 1905, and launched on 29 May 1907; sponsored by Miss Mary Campbell. Birmingham was commissioned on 11 April 1908, Commander Burns Tracy Walling in command.[4] 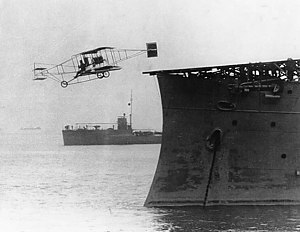 Birmingham served with the Atlantic Fleet until 27 June 1911, and went into reserve at Boston three days later. One of her sailors, Chief Electrician William E. Snyder, received the Medal of Honor for rescuing a shipmate from drowning on 4 January 1910.[5] From Birmingham's deck, civilian pilot Eugene Ely made the first airplane take-off from a warship on 14 November 1910[6] in a Curtiss Model D biplane designed by Glenn Curtiss.

Recommissioned on 15 December 1911, she made a short cruise to the West Indies and then reverted to the Atlantic Reserve Fleet at Philadelphia on 20 April 1912. From 19 May – 11 July, she was in commission for service on Ice Patrol and then returned to the Philadelphia Reserve Group. Recommissioned on 1 October 1913, Birmingham carried the Commissioners of the Panama-Pacific International Exposition on a South American tour from 3 October – 26 December, and was then outfitted at Philadelphia Navy Yard as a tender to the Torpedo Flotilla.

She left the yard on 2 February 1914, and resumed operations with the Atlantic Fleet as flagship of the Torpedo Flotilla. From 22 April – 25 May, she operated with the fleet in Mexican waters. During this time, one of her two Curtiss Model F flying boats performed the first military mission by a US heavier-than-air aircraft, while scouting for mines off Veracruz on 25 April. In 1916, she became flagship of Destroyer Force Atlantic Fleet, and Torpedo Flotilla 3.

World War I and fate

Following American entrance into World War I, Birmingham patrolled along the northeast U.S. coast until 14 June 1917, when she sailed from New York as part of the escort for the first US troop convoy to France. After returning to New York she was fitted for service in Europe and in August reported to Gibraltar as flagship for Rear Admiral A. P. Niblack, Commander, US Forces Gibraltar. She escorted convoys between Gibraltar, the British Isles, and France until the Armistice. After a short cruise in the eastern Mediterranean, she returned to the United States in January 1919.

From July 1919 to May 1922, she was based at San Diego, California as flagship of Destroyer Squadrons, Pacific Fleet, and then moved to Balboa, Canal Zone as flagship of the Special Service Squadron. After cruising along the Central American and northern South American coast, she returned to Philadelphia and was decommissioned there on 1 December 1923, being sold for scrap on 13 May 1930.

This article incorporates text from the public domain Dictionary of American Naval Fighting Ships. The entry can be found here.