U, or u, is the twenty-first and sixth-to-last letter of the ISO basic Latin alphabet and the fifth vowel letter of the modern English alphabet. Its name in English is u (pronounced /ˈjuː/), plural ues.[1][2]

The letter u ultimately comes from the Phoenician letter waw by way of the letter y. See the letter y for details.

During the late Middle Ages, two forms of 'v' developed, which were both used for its ancestor 'u' and modern 'v'. The pointed form 'v' was written at the beginning of a word, while a rounded form 'u' was used in the middle or end, regardless of sound. So whereas 'through' and 'excuse' appeared as in modern printing, 'have' and 'upon' were printed 'haue' and 'vpon', respectively. The first recorded use of 'u' and 'v' as distinct letters is in a Gothic alphabet from 1386, where 'v' preceded 'u'. Printers eschewed capital 'U' into the 17th century and the distinction between the two letters was not fully accepted by the French Academy until 1762.[3] 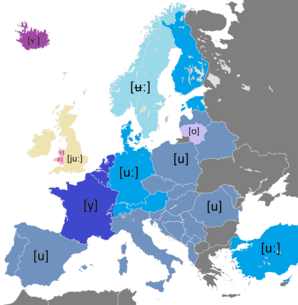 Pronunciation of the name of the letter ⟨u⟩ in European languages

In English, the letter ⟨u⟩ has four main pronunciations. There are "long" and "short" pronunciations. Short ⟨u⟩, found originally in closed syllables, most commonly represents /ʌ/ (as in 'duck'), though it retains its old pronunciation /ʊ/ after labial consonants in some words (as in 'put') and occasionally elsewhere (as in 'sugar'). Long ⟨u⟩, found originally in words of French origin (the descendant of Old English long u was respelled as ⟨ou⟩), most commonly represents /juː/ (as in 'mule'), reducing to /uː/ after ⟨r⟩ (as in 'rule'), ⟨j⟩ (as in 'June') and sometimes (or optionally) after ⟨l⟩ (as in 'lute'), and after additional consonants in American English (see do–dew merger). (After ⟨s⟩, /sjuː, zjuː/ have assimilated to /ʃuː, ʒuː/.) In a few words, short ⟨u⟩ represents other sounds, such as /ɪ/ in 'business' and /ɛ/ in 'bury'.

Additionally, the letter ⟨u⟩ is used in text messaging and internet and other written slang to denote 'you', by virtue of both being pronounced /juː/.

One thing to note is that certain varieties of the English language (i.e. British English, Canadian English, etc.) use the letter U in words such as colour, labour, valour, etc.; however, in American English the letter is not used and said words mentioned are spelled as color and so on.

In most languages that use the Latin alphabet, ⟨u⟩ represents the close back rounded vowel /u/ or a similar vowel.[8]

The symbol 'U' is the chemical symbol for uranium.

In the context of Newtonian mechanics 'U' is the symbol for the potential energy of a system.

In IPA, the close back rounded vowel is represented by the lower case ⟨u⟩.

U is also the source of the mathematical symbol ∪, representing a union. It is used mainly for Venn diagrams and geometry.

It is used as for micro- in metric measurements as a replacement for the Greek letter μ (mu), of which it is a graphic approximation when that Greek letter is not available, as in "um" for μm (micrometer).

U is a honorific in Burmese.[9]