From Encyclopedia Britannia
Jump to navigation Jump to search
For other uses, see Theodosius II (disambiguation).

Theodosius II (Latin: Flavius Theodosius Junior Augustus;[1] Greek: Θεοδόσιος Βʹ; 10 April 401 – 28 July 450),[2] commonly surnamed Theodosius the Younger,[3] or Theodosius the Calligrapher, was the Eastern Roman Emperor for most of his life, taking the throne as an infant in 402 and ruling as the Eastern Empire's sole emperor after the death of his father Arcadius in 408. He is mostly known for promulgating the Theodosian law code, and for the construction of the Theodosian Walls of Constantinople. He also presided over the outbreak of two great Christological controversies, Nestorianism and Eutychianism. 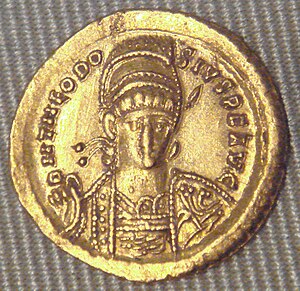 Theodosius was born in 401 as the only son of Emperor Arcadius and his Frankish-born wife Aelia Eudoxia. Already in January 402 he was proclaimed co-Augustus by his father, thus becoming the youngest person ever to bear this title in Roman history.[4] In 408, his father died and the seven-year-old boy became Emperor of the Eastern half of the Roman Empire.

According to Procopius, the Sasanian king Yazdegerd I (399-420) was appointed by Arcadius as the guardian of Theodosius, whom Yazdegerd treated as his own child, sending a tutor to raise him and warning that enmity toward him would be taken as enmity toward Persia.[5]

Government was at first by the Praetorian Prefect Anthemius, under whose supervision the Theodosian land walls of Constantinople were constructed.

In 414, Theodosius' older sister Pulcheria was proclaimed Augusta and assumed the regency. By 416 Theodosius was declared Augustus in his own right and the regency ended, but his sister remained a strong influence on him. In June 421, Theodosius married Aelia Eudocia, a woman of Greek origin.[6][7][8][9][10] The two had a daughter named Licinia Eudoxia. A separation ultimately occurred between the imperial couple, with Eudocia's establishment in Jerusalem where she favoured monastic Monophysitism and Pulcheria reassuming an influential role with the support of the eunuch Chrysaphius.

Theodosius' increasing interest in Christianity, fuelled by the influence of Pulcheria, led him to go to war against the Sassanids (421–422), who were persecuting Christians; the war ended in a stalemate, when the Romans were forced to accept peace as the Huns menaced Constantinople.[11]

In 423, the Western Emperor Honorius, Theodosius' uncle, died and the primicerius notariorum Joannes was proclaimed Emperor. Honorius' sister Galla Placidia and her young son Valentinian fled to Constantinople to seek Eastern assistance and after some deliberation in 424 Theodosius opened the war against Joannes. On 23 October 425, Valentinian III was installed as Emperor of the West with the assistance of the magister officiorum Helion, with his mother acting as regent. To strengthen the ties between the two parts of the Empire, Theodosius' daughter Licinia Eudoxia was betrothed to Valentinian.

In 425, Theodosius founded the University of Constantinople with 31 chairs (15 in Latin and 16 in Greek). Among the subjects were law, philosophy, medicine, arithmetic, geometry, astronomy, music and rhetoric.

In 429, Theodosius appointed a commission to collect all of the laws since the reign of Constantine I, and create a fully formalized system of law. This plan was left unfinished, but the work of a second commission that met in Constantinople, assigned to collect all of the general legislations and bring them up to date, was completed; their collection was published as the Codex Theodosianus in 438. The law code of Theodosius II, summarizing edicts promulgated since Constantine, formed a basis for the law code of Emperor Justinian I, the Corpus Juris Civilis, in the following century.

Wars with the Huns, Vandals, and Persians

The war with Persia proved indecisive, and a peace was arranged in 422 without changes to the status quo. The later wars of Theodosius were generally less successful.

The Eastern Empire was plagued by raids by the Huns. Early in Theodosius II's reign Romans used internal Hun discord to overcome Uldin's invasion of the Balkans. The Romans strengthened their fortifications and in 424 agreed to pay 350 pounds of gold to encourage the Huns to remain at peace with the Romans. In 433 with the rise of Attila and Bleda to unify the Huns, the payment was doubled to 700 pounds.

When Roman Africa fell to the Vandals in 439, both Eastern and Western Emperors sent forces to Sicily, intending to launch an attack on the Vandals at Carthage, but this project failed. Seeing the Imperial borders without significant forces, the Huns and Sassanid Persia both attacked and the expeditionary force had to be recalled. During 443 two Roman armies were defeated and destroyed by the Huns. Anatolius negotiated a peace agreement; the Huns withdrew in exchange for humiliating concessions, including an annual tribute of 2,100 Roman pounds (ca. 687 kg) of gold.[12] In 447 the Huns went through the Balkans, destroying among others the city of Serdica (Sofia) and reaching Athyra (Büyükçekmece) on the outskirts of Constantinople. 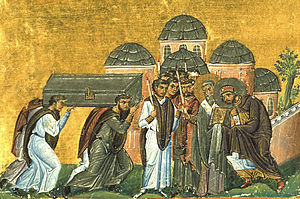 Theodosius welcomes the relics of John Chrysostom. Miniature from the early 11th century.

During a visit to Syria, Theodosius met the monk Nestorius, who was a renowned preacher. He appointed Nestorius Archbishop of Constantinople in 428. Nestorius quickly became involved in the disputes of two theological factions, which differed in their Christology. Nestorius tried to find a middle ground between those who, emphasizing the fact that in Christ God had been born as a man, insisted on calling the Virgin Mary Theotokos ("birth-giver of God"), and those who rejected that title because God, as an eternal being, could not have been born. Nestorius suggested the title Christotokos ("birth-giver of Christ") as a compromise, but it did not find acceptance with either faction. He was accused of separating Christ's divine and human natures, resulting in "two Christs", a heresy later called Nestorianism. Though initially supported by the emperor, Nestorius found a forceful opponent in Archbishop Cyril of Alexandria. At the request of Nestorius, the emperor called a council, which convened in Ephesus in 431. This council affirmed the title Theotokos and condemned Nestorius, who returned to his monastery in Syria and was eventually exiled to a remote monastery in Egypt.

Almost twenty years later, the theological dispute broke out again, this time caused by the Constantinopolitan abbot Eutyches, whose Christology was understood by some to mingle Christ's divine and human nature into one. Eutyches was condemned by Archbishop Flavian of Constantinople but found a powerful friend in Cyril's successor Dioscurus of Alexandria. Another council was convoked in Ephesus in 449, later deemed a "robber synod" by Pope Leo I because of its tumultuous circumstances. This council restored Eutyches and deposed Flavian, who was mistreated and died shortly afterwards. Leo of Rome and many other bishops protested against the outcome, but the emperor supported it. Only after his death in 450 would the decisions be reversed at the Council of Chalcedon.

Theodosius died in 450 as the result of a riding accident. In the ensuing power struggle, his sister Pulcheria, who had recently returned to court, won out against the eunuch Chrysaphius. She married the general Marcian, thereby making him Emperor.

Like Constantine the Great and several of his successors, he was buried in the Church of the Holy Apostles, in a porphyry sarcophagus that was described in the 10th century by Constantine VII Porphyrogenitus in the De Ceremoniis.[13]