This maneuver is used for different effects in races, where one ship is not only sailing in a desired direction, but also concerned with slowing the progress of competitors.

The need for tacking

Tacking from starboard tack to port tack. Wind shown in red. ① on starboard tack, ② turning to windward to begin the tacking maneuver or "preparing to come about", ③ headed into the wind; the sail luffs and loses propulsion, while the vessel makes way on momentum to provide rudder steerage, ④ making way on the new port tack by sheeting in the mainsail, ⑤ on port tack.

Sailing ships cannot proceed directly into the wind, but often need to go in that direction. Movement is achieved by tacking. If a vessel is sailing on a starboard tack with the wind blowing from the right side and tacks, it will end up on a port tack with the wind blowing from the left side. See the accompanying image; the red arrow indicates the wind direction. This maneuver is frequently used when the desired direction is (nearly) directly into the wind.

In practice, the sails are set at an angle of 45° to the wind for conventional sailships and the tacking course is kept as short as possible before a new tack is set in. Rotor ships can tack much closer to the wind, 20 to 30°.

The opposite maneuver, i.e. turning the stern through the wind, is called jibing (or wearing on square-rigged ships). Tacking more than 180° to avoid a jibe (mostly in harsh conditions) is sometimes referred to as a 'chicken jibe'.[2]

Relationship between tacking and beating to windward

Tacking is sometimes confused with beating to windward, which is a process of beating a course upwind and generally implies (but does not require) actually coming about. In the accompanying figure, the boat is seen to tack three times while beating to windward.

When used without a modifier, the term "tacking" is always synonymous with "coming about"; however, some find it acceptable to say "tack downwind"; i.e., change tack by jibing rather than coming about. Racers often use this maneuver because most modern sailboats (especially larger boats with spinnakers and a variety of staysails) sail substantially faster on a broad reach than when running "dead" downwind. The extra speed gained by zigzagging downwind can more than make up for the extra distance that must be covered. Cruising boats also often tack downwind when the swells are also coming from dead astern (i.e., there is a "following sea"), because of the more stable motion of the hull.

About is defined as: "To go about is to change the course of a ship by tacking. Ready about, or boutship, is the order to prepare for tacking."[3] 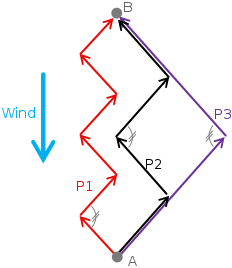 Depending on the situation, different intervals between tacking can be used. This does not influence the total distance travelled (though may impact the time required). Sailing from point A to point B, path P1 involves more turns but only requires a narrow channel. Path P2 involves fewer turns but a wider channel. Path P3 requires only a single turn but covers comparatively the widest channel.

Beating is the procedure by which a ship moves on a zig-zag course to make progress directly into the wind (upwind). No sailing vessel can move directly upwind (though that may be the desired direction). Beating allows the vessel to advance indirectly upwind.

A ship that is beating will sail as close to the wind as possible; this position is known as close hauled. In general, the closest angle to the wind that a ship can sail is around 35 to 45 degrees. Some modern yachts can sail very near to the wind, while older ships, especially square-rigged ships, are much worse at it.

Thus when a ship is tacking, it is moving both upwind and across the wind. Cross-wind movement is not desired, and may be very much undesirable, if for instance the ship is moving along a narrow channel.

Therefore, the ship changes tack periodically, reversing the direction of cross-wind movement while continuing the upwind movement. The interval between tacks depends (in part) on the lateral space available: in a small navigable channel, tacks may be required every few minutes, while in the open ocean days may pass between tacks, provided that the wind continues to come from the same general direction.

In older vessels that could not sail close to the wind, beating could be an expensive process that required sailing a total distance several times the distance actually traveled upwind.

When beating to windward, often your desired destination although still in the no sail zone, is not aligned directly upwind - to the eye of the wind. In this case one tack becomes more favorable than the other - it angles more closely in the direction you wish to travel than the other tack does. Then the best strategy is to stay on this favorable tack as much as possible, and shorten the time you need to sail on the unfavorable tack. This will result in a faster passage with less wasted effort. Your overall course then is not an equal zig-zag as in the diagrams above, but more of a saw tooth pattern. If while on this tack the wind shifts in your favor, called a "lift," and allows you to point up even more, so much the better, then this tack is even more favorable. But if the wind shifts against you and makes you fall off, called a "header," then the opposite tack may become the more favorable course.[4]

Since conditions are always changing somewhat, a sailor must keep evaluating which tack, port or starboard is actually the most favorable. So with these concepts in mind, when the desired destination is exactly to windward, the most efficient strategy is given by the old racing adage to "Tack on a header." This is true because if before the wind changed both tacks were exactly equal – neither one was more favorable, then since a header on one tack is automatically a lift on the other, the opposite tack has just become the more favorable one and the helmsman should tack and change course for the most efficient passage.[4]

Sailing courses laid out for racing purposes always have one leg directly to windward. This is where the highest sailing skills often form the essence of the race. Sail trim and keeping the boat moving most efficiently are of the utmost importance. In these circumstances tacking duels will often develop.

Any boat in clear air to windward has an aerodynamic advantage over other boats. To keep this advantage the lead boat will often try to "blanket" the trailing boat(s) by maneuvering to keep them in the disturbed foul air she is creating to her lee. This involves constant anticipation and balancing many different dynamic factors. Conversely the trailing boats will try to overtake or otherwise escape the bad air blanket created by the lead boat and head for clear air without losing too much speed or momentum.

A tacking duel develops when two or more boats execute multiple usually excessive course changes (tacking) in very close quarters. This often involves bending, or breaking, the safety right-of-way-rules, and intentionally creating dangerous and threatening conditions between the dueling boats. Each skipper is trying to gain the lead and the advantage of clear air. This can sometimes become counter-productive as some speed and time is always lost in each tack.

The method of tacking of sailing craft differs, depending on whether they are fore-and aft, square-rigged, a windsurfer, or a kitesurfer.