The Strategic Defence and Security Review 2010 was announced by the newly formed Conservative-Liberal Democrat coalition government of the United Kingdom in May 2010, and published on 19 October 2010.[1] The previous major review of UK defence strategy was the Strategic Defence Review, published in 1998, and updated in 2003 by the Delivering Security in a Changing World white paper.

As well as wanting an updated security policy, both the Conservatives and Liberal Democrats wanted the £38 billion overspend in the Ministry of Defence (MoD) procurement budget addressed.[2] With the government committed to reducing the national budget deficit, the Treasury asked the MoD to draw up options for a 10–20% real-terms cut in its budget.[3] However, the final amount was a 7.7% reduction over four years.[4] 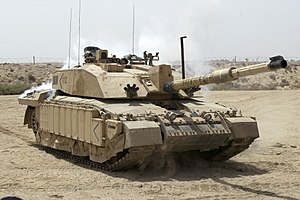 The number of Challenger 2 tanks would be cut by 40%.

All three of Britain's armed forces would take cuts in manpower. Overall, the largest overseas deployment was expected to be not more than 30,000 personnel, including maritime and air force units. This compares to the 45,000 involved in the 2003 invasion of Iraq.[5] In November 2010, the MoD released its plan to implement the changes.[6][7] 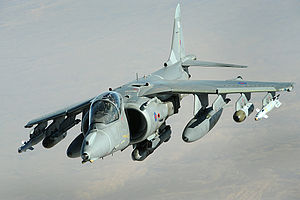 The Harrier GR9 was retired in order to maintain the Tornado as the RAF's main strike aircraft until the Typhoon matured. The latter and the Lockheed Martin F-35 Lightning II would constitute the RAF's fast jet fleet in the future.

The SDSR called for the almost immediate decommissioning of the Royal Navy flagship aircraft carrier, HMS Ark Royal, rather than in 2016 as scheduled. This occurred on 11 March 2011.[12]

The Report also announced the early retirement of the Joint Force Harrier aircraft, the Harrier GR7/GR9. Both of these measures were to save money for the purchase of the Queen Elizabeth class aircraft carriers.[3] The Harrier fleet made its last operational flights in December 2010.[13] 72 British Harriers were sold to the United States in 2011 to be used for spares.[14]

The SDSR proposed that one of the two Queen Elizabeth class aircraft carriers currently under construction would be certain to be commissioned, with the fate of the other left undecided. It had been suggested that only one carrier, routinely equipped with 12 fast jets, was to be in service at any one time, with the other carrier held in extended readiness. These plans were to be reviewed in 2015.[1] However, contrary to previous proposals, in May 2014 it was announced by Prime Minister David Cameron that the second carrier, the R09 Prince of Wales, would be brought into service alongside the Queen Elizabeth (R08). He confirmed the second vessel was already 40% built.[15]

The SDSR announced the government's intention to switch its purchase of F-35Bs to the carrier-variant F-35C to allow for a wider range and weapons to be used.[1] However, in May 2012 this decision was reversed, and the F-35B was chosen instead, as the previous government had intended. This was because the cost of converting the Queen Elizabeth class aircraft carriers to accommodate the carrier-variant F-35C had risen to twice the original estimate.[16][17] 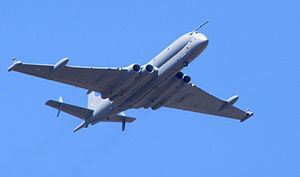 The Nimrod MRA4 was cancelled and all airframes scrapped.
See also: Future of the Royal Air Force

On 3 August 2011, the House of Commons Defence Select Committee published a critical review of the SDSR.[27]