The Special Forces Support Group (SFSG) is a special forces unit of the British Armed Forces. The SFSG is the newest addition to the United Kingdom Special Forces. It was formed officially on 3 April 2006 to support the Special Air Service, the Special Reconnaissance Regiment and the Special Boat Service on operations. The 1st Battalion Parachute Regiment (1 PARA), a company strength group of Royal Marines, and a contingent of RAF Regiment personnel form the UK's Special Forces Support Group (SFSG). The SFSG may provide extra firepower from land or air to fulfil their mission.

During the Iraq War, the SFSG was part of Task Force Black which was composed of a rotational British SAS sabre squadron and a platoon of paratroopers from the SFSG (also known as Task Force Maroon). During the Basra prison incident, a platoon of SFSG accompanied A Squadron 22nd SAS to Basra to assist in recovering the two detained SAS operatives.[4] Paratroopers from the SFSG supported SAS operations around Baghdad usually cordoning off areas where the SAS were carrying out their missions.[5] In late 2005/early 2006, the SFSG took part in Operation Lightwater [6] The SFSG platoon in Iraq supported B Squadron 22nd SAS during Operation Larchwood 4, killing one terrorist when he ran out of the target building and hid under a car.[7] members of the SFSG and the SAS often wore Army Combat Uniform (ACU) or Desert Camouflage Uniform (DCU) to blend in when operating alongside American JSOC units.[8] 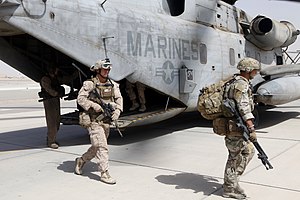 An SFSG company was deployed to Afghanistan in 2006 to support the SBS and SRR as part of Operation Kindle, the UKSF deployment to Afghanistan (known as Task Force 42).[10] On September 9, 2009, the Special Boat Service, supported by the SFSG, conducted a mission to rescue Stephen Farrell; a journalist captured and held at a Taliban safehouse in Char Dara District, Kunduz Province, by Taliban insurgents. The UKSF team was inserted by helicopters from the 160th SOAR, the SBS assaulted the safehouse whilst the SFSG set up a cordon. Farrell was rescued and a number of Taliban were killed, however one member of the SFSG was killed as well as Farrell's Afghan interpreter and two civilians.[11][12][13]

The SFSG have been known to carryout operations in Helmand Province with the United States Marine Corps; they also often conduct unilateral raids (similar to the US Army Rangers), but typically act as both blocking and quick reaction forces for 'Tier 1' units.[14] In August 2013, The Daily Telegraph reported that the SFSG, worked hand-in-hand with an elite unit of Afghan commandos, known as Task Force 444, throughout Helmand Province. The unit's A Company arrived in Afghanistan in January for a six-month tour and went on to mount relentless raids against the Taliban. The Ministry of Defence sources confirmed that the SFSG and Afghan strike forces led a series of raids on suspected Taliban bomb-makers in May after three British soldiers were killed in a roadside bomb at the end of April; the raids continued for two or three times a week afterwards. Also the unit targeted insurgent supply lines in the desert near the border with Pakistan, and Taliban bases in the centre of the province.[15] In 2014, The SFSG maintained a high operational tempo months after the official end of offensive operations by UK forces.

The SFSG also act as the hunter force during the SERE phase of the UKSF Selection; in addition, the SFSG also have a rotating company group trained in Counter Terrorism (CT) to support the on-call SAS or SBS squadrons on CT rotation.[16]

The unit's creation stems from the need to provide infantry support to the United Kingdom Special Forces, which became evident after the Battle of Tora Bora during which two Special Boat Service (SBS) squadrons assaulted the al-Qaeda cave complex.[17] Previously, this support was carried out on an ad hoc basis, with infantry units assisting special forces teams when needed.

The Ministry of Defence does not comment on special forces matters, therefore little verifiable information exists in the public domain.[18]

In December 2004, it was announced that a unit would be formalised for this role as part of the wider future army structure. It was initially conceived as a battalion of "Rangers", similar to the United States Army Rangers.[20] The SFSG's formation was announced officially by the then Secretary of State for Defence John Reid in Parliament on 20 April 2006.[1] It was established to support British special forces units in battle overseas and on domestic "counter-terrorist" operations.[19] Most unit personnel are Parachute Regiment soldiers, Royal Marine or Army commandos, or RAF Regiment gunners. All infantrymen selected for the SFSG have passed either the P Company selection course run by the Parachute Regiment, the Royal Marines Commando course or the RAF Regiment Pre-Parachute selection course.[21] Royal Marines and RAF Regiment gunners are sourced from across their respective Corps.[21]

The Royal Marines elements comprise approximately one platoon strength within each of A, B, and C Companies. The RAF Regiment also provide a platoon in B company and forward air controllers to direct close air support. The Support company comprises mortar, sniper, and patrol platoons.[21] The Patrol platoon operates vehicles, including the Jackal.

There is also a RAF Regiment CBRN unit assigned to the SFSG to provide specialised knowledge and capability to military and civilian agencies in detection and handling of chemical, biological, and radiological/nuclear weapons and materials.[21]