Soil carbon is the solid carbon stored in global soils. This includes both soil organic matter and inorganic carbon as carbonate minerals.[1] Soil carbon is a carbon sink in regard to the global carbon cycle, playing a role in biogeochemistry, climate change mitigation, and constructing global climate models.[2]

Soil carbon is present in two forms: inorganic and organic. Soil inorganic carbon consists of mineral forms of carbon, either from weathering of parent material, or from reaction of soil minerals with atmospheric CO2. Carbonate minerals are the dominant form of soil carbon in desert climates. Soil organic carbon is present as soil organic matter. It includes relatively available carbon as fresh plant remains and relatively inert carbon in materials derived from plant remains: humus and charcoal.[3]

Although exact quantities are difficult to measure, human activities have caused substantial losses of soil organic carbon.[4] Of the 2,700 Gt of carbon stored in soils worldwide, 1550 GtC is organic and 950 GtC is inorganic carbon, which is approximately three times greater than the current atmospheric carbon and 240 times higher compared with the current annual fossil fuel emission.[5] The balance of soil carbon is held in peat and wetlands (150 GtC), and in plant litter at the soil surface (50 GtC). This compares to 780 GtC in the atmosphere, and 600 GtC in all living organisms. The oceanic pool accounts for 38,200 GtC.

Soil carbon cycle through the microbial loop
Carbon dioxide in the atmosphere is fixed by plants (or autotrophic microorganisms) and added to soil through processes such as (1) root exudation of low-molecular weight simple carbon compounds, or deposition of leaf and root litter leading to accumulation of complex plant polysaccharides. (2) Through these processes, carbon is made bioavailable to the microbial metabolic "factory" and subsequently is either (3) respired to the atmosphere or (4) enters the stable carbon pool as microbial necromass. The exact balance of carbon efflux versus persistence is a function of several factors, including aboveground plant community composition and root exudate profiles, environmental variables, and collective microbial phenotypes (i.e., the metaphenome).[8][9]
Main article: Soil organic matter

Detritus resulting from plant senescence is the major source of soil organic carbon. Plant materials, with cell walls high in cellulose and lignin, are decomposed and the not-respired carbon is retained as humus. Cellulose and starches readily degrade, resulting in short residence times. More persistent forms of organic C include lignin, humus, organic matter encapsulated in soil aggregates, and charcoal. These resist alteration and have long residence times.

Fire derived forms of carbon are present in most soils as unweathered charcoal and weathered black carbon.[10][11] Soil organic carbon is typically 5 - 50% derived from char,[12] with levels above 50% encountered in mollisol, chernozem, and terra preta soils.[13]

Root exudates are another source of soil carbon.[14] 5 - 20% of the total plant carbon fixed during photosynthesis is supplied as root exudates in support of rhizospheric mutualistic biota.[15][16] Microbial populations are typically higher in the rhizosphere than in adjacent bulk soil.

Organic carbon is vital to soil capacity to provide edaphic ecosystem services. The condition of this capacity is termed soil health, a term that communicates the value of understanding soil as a living system as opposed to an abiotic component. Specific carbon related benchmarks used to evaluate soil health include CO2 release, humus levels, and microbial metabolic activity.

The exchange of carbon between soils and the atmosphere is a significant part of the world carbon cycle.[17] Carbon, as it relates to the organic matter of soils, is a major component of soil and catchment health. Several factors affect the variation that exists in soil organic matter and soil carbon; the most significant has, in contemporary times, been the influence of humans and agricultural systems.

Natural variations in soil carbon occur as a result of climate, organisms, parent material, time, and relief.[18] The greatest contemporary influence has been that of humans; for example, carbon in Australian agricultural soils may historically have been twice the present range that is typically from 1.6 to 4.6 per cent.[19]

It has long been encouraged that farmers adjust practices to maintain or increase the organic component in the soil. On one hand, practices that hasten oxidation of carbon (such as burning crop stubbles or over-cultivation) are discouraged; on the other hand, incorporation of organic material (such as in manuring) has been encouraged. Increasing soil carbon is not a straightforward matter; it is made complex by the relative activity of soil biota, which can consume and release carbon and are made more active by the addition of nitrogen fertilizers.[18] 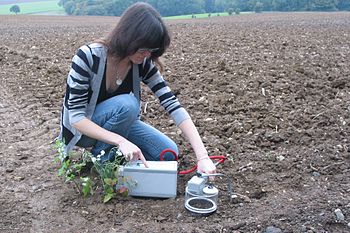 The most homogeneous and comprehensive data on the organic carbon/matter content of European soils remain those that can be extracted and/or derived from the European Soil Database in combination with associated databases on land cover, climate, and topography. The modelled data refer to carbon content (%) in the surface horizon of soils in Europe. In an inventory on available national datasets, seven member states of the European Union have available datasets on organic carbon. In the article "Estimating soil organic carbon in Europe based on data collected through a European network" (Ecological Indicators 24,[20] pp. 439–450), a comparison of national data with modelled data is performed. The LUCAS soil organic carbon data are measured surveyed points and the aggregated results[21] at regional level show important findings. Finally, a new proposed model for estimation of soil organic carbon in agricultural soils has estimated current top SOC stock of 17.63 Gt[22] in EU agricultural soils. This modelling framework has been updated by integrating the soil erosion component to estimate the lateral carbon fluxes.[23]

Much of the contemporary literature on soil carbon relates to its role, or potential, as an atmospheric carbon sink to offset climate change. Despite this emphasis, a much wider range of soil and catchment health aspects are improved as soil carbon is increased. These benefits are difficult to quantify, due to the complexity of natural resource systems and the interpretation of what constitutes soil health; nonetheless, several benefits are proposed in the following points:

Forest soils constitute a large pool of carbon. Anthropogenic activities such as deforestation cause releases of carbon from this pool, which may significantly increase the concentration of greenhouse gas (GHG) in the atmosphere.[24] Under the United Nations Framework Convention on Climate Change (UNFCCC), countries must estimate and report GHG emissions and removals, including changes in carbon stocks in all five pools (above- and below-ground biomass, dead wood, litter, and soil carbon) and associated emissions and removals from land use, land-use change and forestry activities, according to the Intergovernmental Panel on Climate Change's good practice guidance.[25][26] Tropical deforestation represents nearly 25 percent of total anthropogenic GHG emissions worldwide.[27] Deforestation, forest degradation, and changes in land management practices can cause releases of carbon from soil to the atmosphere. For these reasons, reliable estimates of soil organic carbon stock and stock changes are needed for Reducing emissions from deforestation and forest degradation and GHG reporting under the UNFCCC.

The government of Tanzania—together with the Food and Agriculture Organization of the United Nations[28] and the financial support of the government of Finland—have implemented a forest soil carbon monitoring program[29] to estimate soil carbon stock, using both survey and modelling-based methods.