Ship motions are defined by the six degrees of freedom that a ship, boat or any other craft can experience.

The vertical/Z axis, or yaw axis, is an imaginary line running vertically through the ship and through its centre of mass . A yaw motion is a side-to side movement of the bow and stern of the ship.

The transverse/Y axis, lateral axis, or pitch axis is an imaginary line running horizontally across the ship and through the centre of mass. A pitch motion is an up-or-down movement of the bow and stern of the ship.

The longitudinal/X axis, or roll axis, is an imaginary line running horizontally through the length of the ship, through its centre of mass, and parallel to the waterline. A roll motion is a side-to-side or port-starboard tilting motion of the superstructure around this axis. 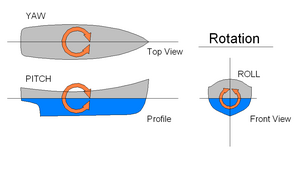 Axes of a ship and rotations around them
For other uses, see Euler angles § Tait-Bryan angles.

There are three special axes in any ship, called longitudinal, transverse and vertical axes. The movements around them are known as roll, pitch, and yaw respectively. 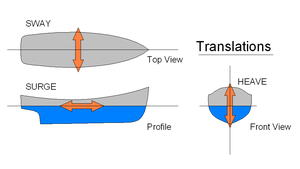 Heave
The linear vertical (up/down) motion; excessive downward heave can swamp a ship.
Sway
The linear transverse (side-to-side or port-starboard) motion. This motion is generated directly either by the water and wind currents exerting forces against the hull or by the ship's own propulsion; or indirectly by the inertia of the ship while turning. This movement can be compared to the vessel's drift from its course.
Surge
The linear longitudinal (front/back or bow/stern) motion imparted by maritime conditions.

There are methods for both passive and active motion stabilization used in some designs. They include static hull features such as skegs and bilge keels, or active mechanical devices like counterweights, antiroll tanks and stabilizers.