Template:Shipbuilding A sea trial is the testing phase of a watercraft (including boats, ships, and submarines). It is also referred to as a "shakedown cruise" by many naval personnel. It is usually the last phase of construction and takes place on open water, and it can last from a few hours to many days.

Sea trials are conducted to measure a vessel’s performance and general seaworthiness. Testing of a vessel’s speed, maneuverability, equipment and safety features are usually conducted. Usually in attendance are technical representatives from the builder (and from builders of major systems), governing and certification officials, and representatives of the owners. Successful sea trials subsequently lead to a vessel’s certification for commissioning and acceptance by its owner.

Sea trials can also refer to a short test trip undertaken by a prospective buyer of a new or used vessel as one determining factor in whether to purchase the vessel. 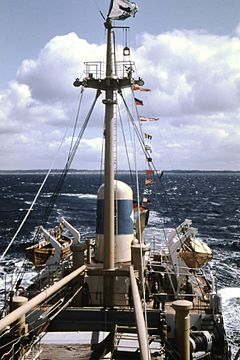 Sea trials are fairly standardized using technical bulletins published by ITTC, SNAME, BMT, regulatory agencies or the owners. They involve demonstrations and tests of the ship's systems and performance.

In a speed trial the vessel is ballasted or loaded to a predetermined draft and the propulsion machinery is set to the contracted maximum service setting, usually some percentage of the machinery's maximum continuous rating. (ex: 90% MCR) The ship's heading is adjusted to have the wind and tide as close to bow-on as possible. The vessel is allowed to come to speed and the speed is continuously recorded using differential GPS. The trial will be executed with different speeds including service (design) and maximum speed. The ship is then turned through 180° and the procedure is followed again. This reduces the impact of wind and tide. The final "Trials Speed" is determined by averaging all of the measured speeds during each of the runs. This process may be repeated in various sea states.

To test a crash stop, the vessel is ballasted or loaded to a predetermined draft and the propulsion machinery is set to the contracted maximum service setting, usually some percentage of the machinery's maximum continuous rating. The trial begins once the order to "Execute Crash Stop" is given. At this point the propulsion machinery is set to full-astern and the helm is put hard-over to either port or starboard. The speed, position and heading are continuously recorded using differential GPS. The final time to stop (i.e.: ship speed is 0 knots) track line, drift (distance traveled perpendicular to the original course) and advance (distance traveled along the original course line) are all calculated. The trial may be repeated at various starting speeds.

During endurance trials the vessel is ballasted or loaded to a predetermined draft and the propulsion machinery is set to the contracted maximum service setting, usually some percentage of the machinery's maximum continuous rating. The fuel flow, exhaust and cooling water temperatures and ship's speed are all recorded.

Maneuvering trials involve a number of trials to determine the maneuverability and directional stability of the ship may be conducted. These include a direct and reverse spiral manoeuvres, zig-zag, and lateral thruster use.[1]

Seakeeping trials were used exclusively for passenger ships, but are now used in a variety of vessels. They involve measurements of ship motions in various sea states, followed by a series of analyses to determine comfort levels, likelihood of sea sickness and hull damage. Trials are usually protracted in nature due to the unpredictability of finding the correct sea state, and the need to conduct the trials at various headings and speeds.[2]