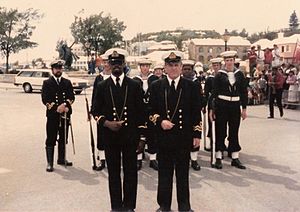 Lt. Commander John Edwards, RNR (SCC), two other officers, and the Guard of TS Admiral Somers parade at Ordnance Island, Bermuda for the completion of Dodge Morgan's record-breaking circumnavigation of the world aboard the American Promise on 11 April, 1986.[3][4]

The Sea Cadet Corps is a national youth charity, working with 15,000 young people between 10 and 18 years old across the UK. It has over 400 units across England, Scotland, Wales, Northern Ireland,[5] Malta and Bermuda all run by 9,000 volunteers. Cadets follow a similar ethos, training plan, and ranks, to the Royal Navy, and are recognised by the UK Ministry of Defence.

The Sea Cadets' ethos is made up of three parts: its values, its mindset and the customs and traditions of the Royal Navy. The promise made by every cadet who joins the Sea Cadet Corps is as follows:

The Sea Cadet Promise: I promise to serve my God, my Queen, my country, and, the Sea Cadet Corps and to obey the orders of my superior officers. I will be proud of my uniform and be smart and seamanlike in wearing it, and, always do my duty.[6] Note: My God refers to an individual’s own faith and is intended to apply equally to those from all faiths or none. (Sea Cadets' Ethos, 2019, p4)

The ethos is underpinned by the Sea Cadet Values which are: Courage, Commitment, Discipline, Respect, Loyalty and Honesty and Integrity.[7] These are taught by staff throughout the time cadets are with a unit, there is also an expectation that Chaplains will take a lead in such delivery (Sea Cadet Chaplaincy (2019) 3.1. Corps Values Training).[7]

Sea Cadets is open to any young person between ages 9 and 18.

For 12 to 17 year olds, young people can join as a Sea Cadet and work their way up through the training programme. When cadets turn 18, they can either leave the Corps or they can stay and train as staff.

For 13 to 18 year olds, the SCC has detachments of Royal Marines Cadets. They follow a more infantry based syllabus including fieldcraft; section battle drills, fire and manoeuvre and general patrolling including reconnaissance missions, ambush and fighting patrols. Other Royal Marines Cadets exist in the Volunteer Cadet Corps and Combined Cadet Force. 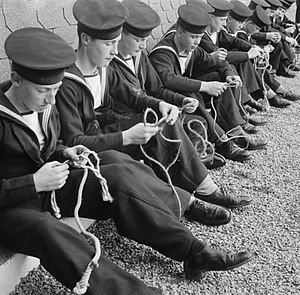 Admiral of the Sea Cadet Corps

The Headquarters of Sea Cadets are in South London at 202 Lambeth Road, SE1 7JW. It is made up of a variety of different departments, including:

The country is divided into six areas, which are:

Each area is run by an Area Officer (AO) with a small team of support staff.

Each area is subdivided into districts of between five and twelve units which are led by volunteers.

Each unit is led by a Commanding Officer (CO) or Officer-in-Charge (OiC). Some units also have a Royal Marines Cadets Detachment, headed by a detachment commander (DC).

A Cadet 1st Class in No.1 Uniform

Cadets follow the Cadet Training Programme (CTP) which covers various water based activities and skills as well as first aid and leadership. Royal Marine Cadets also complete the CTP but have additional elements such as campcraft amongst others.

When you become the rating of Able Cadet (AC) you start a new syllabus called the LDP (Leadership and Development Programme). This is to perfect you leadership skills and teaching skills, this will also help if cadets are looking to become members of staff.

Skills learned in a cadet's time in the SCC usually fall into one of two categories - Specialisations and Proficiencies. Specialisations are often larger subjects than proficiencies, and so are split into three levels; Basic, Intermediate and Advanced, each level increasing in difficulty building on the knowledge gained from the prior levels. Basic specialisations are often gained at the unit during regular training, while Intermediate and Advanced awards are held on an Area or National basis. Proficiencies do not usually have a levelling system, though some subjects such as Piping do contain a Basic/Intermediate level.

Some specialisations, such as Marine Engineering, are also divided into disciplines such as Electrical and Mechanical engineering.

All of the following are on offer to cadets, either at the unit or on district/area/national courses.

Cadets may also work towards recognised qualifications including, Duke of Edinburgh's Award and BTEC qualifications. The BTECs are offered by CVQO, and include Teamwork and Personal Development in the Community (formerly Public Service), Music, and Engineering.

Many qualifications are run by the Sea Cadets but regulated by external bodies. In these cases, cadets earn independent qualifications that are recognised outside the Corps. These include Paddlesport, where they can gain PaddlePower or Star Awards through British Canoeing (formerly known as BCU), First Aid, where they can earn St John Ambulance First Aid certifications, Rowing, where they can earn British Rowing (BR) qualifications and Powerboating/Sailing/Windsurfing/Navigation where they can gain Royal Yachting Association (RYA) qualifications. National courses are also held, often on Royal Navy bases, to teach skills such as leadership and teamwork. Specialist qualification courses include power boating in Scotland, cooking in Preston, and fire fighting in Cornwall. There are competitions at varying levels in many of the sports, proficiencies, and specializations of the SCC. Competitions start at a District level and progress through to National level.

See also: Ranks of the cadet forces of the United Kingdom

From New Entry through to Able Cadet, Sea Cadets are promoted based on their completion of various task-based modules under the CTP - Cadet Training Programme. Leading Cadets and Petty Officer Cadets are required to attend and pass a promotion board (held at area or national level) before being promoted.

At the discretion of the commanding officer of a unit, or district officer, a cadet may be awarded an acting rate if they have completed the majority of the modules required for promotion, or received a partial pass on their promotion board, for example Acting Leading Cadet (ALC), or Acting Petty Officer Cadet (APOC).

The following rates and ranks can be awarded to uniformed adult volunteers, there are also Non uniformed Civilian Instructors (CIs) and Unit Assistants (UAs). From 2009 to 2019, if a person joined as a Civilian Instructor and wanted to be a uniformed member of staff, they would become an Acting Petty Officer or Sergeant, following a 6 month probationary period. From 2020, an adult can join as a uniformed member of staff as a probationary Petty Officer or Sergeant on completion of their application process.

Officers are commissioned under the Cadet Forces Commission.[9]

Another rank is Chaplain, they also commission under the Cadet Forces Commission.

The Sea Cadets have three classes of offshore vessels, all of which are capable of coastal/offshore passage making. Sea Cadet voyages normally last for 1 week, with cadets gaining RYA qualifications for their voyage. Individual Sea Cadet units also have various boats including MOD motor boats such as Vikings, Champs, Dories, dinghies called the ASC (Admiralty Sailing Craft) and Bosuns, in addition to vessels designed specifically for the SCC such as the Trinity 500 rowing boat and RS Quest dinghy. Also on loan from the MOD, canoes, kayaks and windsurfing equipment, units and national training centres also have RIB's.

TS Royalist, the Sea Cadet flagship, is a tall ship owned by the MSSC. She is used to provide week-long training courses for Sea Cadets and Royal Marines Cadets. The ship was launched in 2014 to replace the previous TS Royalist, which was over 40 years old when decommissioned. In 2013 there had been an appeal to replace the ageing flagship: £250,000 was needed this target was achieved in April 2013.[10]

TS City of London and TS Sir Stelios are the Sea Cadets' new (2017 and 2018 respectively) Rustler 42 yachts which have replaced the Tradewinds 35s TS Vigilant and TS City Liveryman. They are both Rustler 42 yachts and provide nationally-recognised RYA training for those wishing to gain qualifications and experience yacht sailing.

These two vessels are the cadets' offshore powered training-ship. They are 24 m (78 ft 9 in) long and each cost about £2.6m. TS Jack Petchey is so named because the Jack Petchey Foundation donated £1m in order for it to be built. The Jerwood Foundation donated £1,216,700 for the construction of TS John Jerwood. The training ships can hold between 12-16 cadets, four permanent staff and two CFAVs and provides an experience at sea focussing on deck work, navigation, bridge watchkeeping, cook/steward and marine engineering. Each vessel is fitted with twin Perkins Sabre Type M215C Turbo Diesel main engines, each giving 200 shp (150 kW) at 2,500 rpm.[14]

The Trinity 500 is a stable fixed seat rowing boat, purpose built for the Sea Cadets to deliver the full SCC Rowing Scheme. The boat has also been approved by British Rowing, to allow for the delivery of their Explore Rowing Scheme. The boat was designed by Jo Richards, Olympic medallist and designer of a wide range of craft, in response to the requirement of the Sea Cadets for a modern, low maintenance, purpose-designed fixed seat rowing boat with good performance under oars and with the capacity to mount a small outboard motor. The Trinity 500 is named to mark the quincentenary of the incorporation of Trinity House, the statutory authority for aids to navigation in England, Wales, The Channel Islands and Gibraltar. The Trinity House Maritime Charity, a separately funded arm of the Corporation of Trinity House generously funded the design and development costs of the boat.

In 2017, a BBC Panorama episode entitled "Cadet Abuse Cover-Up" highlighted sexual abuse cases in the British Cadet Forces. In a 1979 case of sexual abuse of a 14-year-old cadet in Hertfordshire, the boy's parents were dissuaded from reporting the offender to police by Sea Cadet officers in full uniform, who had visited their home. The offender was neither dismissed or suspended but instead promoted to oversee 10 cadet units in London.[16] In the years 2012 to 2017 there were 28 allegations of sexual abuse made against SCC volunteers, including historical allegations. All 28 offenders were dismissed and referred to police.[16]

Other elements of the Community Cadet Forces