Scotstoun is an area of Glasgow, Scotland, west of Glasgow City Centre. It is bounded by Garscadden to the west, Victoria Park, Jordanhill and Whiteinch to the east, Jordanhill to the north and the River Clyde (and Braehead beyond) to the south. At the heart of Scotstoun lies Scotstounhill, an enclave of late Victorian and post-war housing centred upon Scotstounhill railway station. Scotstoun (along with the Govan shipyard) is home to BAE Systems Surface Ships (formerly Yarrow Shipbuilders), and to the Glasgow Warriors rugby team. 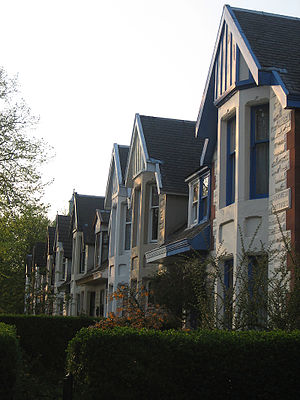 Scotstoun was until the early 1860s the site of the Oswald family estate, which was centred on Scotstoun House. By 1861 the westward expansion of the Clyde shipbuilding yards had reached Scotstoun with the opening of the Charles Connell and Company shipyard in 1861 and the new Yarrow Shipbuilders yard in 1906. This led to the break-up of the estate, as portions were sold off for housing, to create Victoria Park and for further industrial development (iron, engineering and shipbuilding) along the river, with companies such as the Coventry Ordnance Works and Albion Motors locating in the area.

The southern part of Scotstoun is characterised by late 19th/ early 20th century tenements, to the north, and dating from a similar period, is a grid-like estate of mainly terraced cottage style villas with distinctive English styling in wide tree-lined streets, an early example of Ebenezer Howard-type garden suburb town planning.

The west of the area has high rise tower blocks, the Kingsway flats, and a new housing complex of houses and 'mini multis' built in 2016 by Glasgow Housing Association.

Today parts of Scotstoun is a conservation area, part of which lies in the Jordanhill School catchment, and is popular with families seeking fine period houses with gardens close to the heart of the West End. The local primary school and church lie in the north of the area. South of the main road through the area are tenements, a mixture of privately owned and social housing. To the west of the area is a new housing project of houses and flats. Some of the high rise tower blocks were demolished to make way for the new housing project by Glasgow Housing Association. Several tower blocks are still standing behind the new housing complex.

Scotstoun is today home to Scotstoun Primary School, and formerly a fine red sandstone secondary school, Victoria Drive, which was closed and demolished in 1998. Scotstoun's finest B listed building, the former Scotstoun West church, was mysteriously destroyed by fire then replaced with a Cala development of flats in the 1990s.

Scotstoun is also the site of Scotstoun Leisure Centre, opened in 1994, which houses the Scottish National Badminton Academy, a 25-metre swimming pool used by the City of Glasgow Swimming Team and Scotstoun Stadium - where the Glasgow Warriors play. Rugby at Scotstoun goes back to the beginning of the 1900s, when the likes of Glasgow HSFP and Kelvinside Accies, along with others, played there on their journeys to Old Anniesland and Balgray respectively[1].

Formerly, Scotstoun Showground had no internal corridor under the stand, which meant you had to go outside down the back of the stand to the showers and back which often provided entertainment for the residents of Danes Drive. A lady resident, whose modesty had been offended by the sight of semi-naked men running up and down behind the stand, complained to the police and a young constable was despatched from Partick Police Station to investigate. When he looked out from the woman's window, all he could see was the red brick façade, and on enquiring as to what was the problem, the lady retorted, "Son, you have to stand on this table!"[2]

Scotstoun Sports Campus is an international sports venue, hosting both squash and the table tennis events during the 2014 Commonwealth Games as well as synchronised swimming events at the 2018 European Championships, co-hosted with Berlin.

A brand new community centre was opened on Balmoral Street on 18 June 2011. It is called "The Heart of Scotstoun Community Centre". A community cafe opened on Dumbarton Road in 2016 called Cafe Taste that works closely with the local community and provides ethical employment.

Scotstoun Primary School is a primary school built by the Renfrew Landward School Board in 1905 on Earlbank Avenue.[3] The building differs from those built by the Glasgow School Board in many respects, notably in the inclusion of its distinctive towers.[4] The current head teacher is Gillian Mackay. Scotstoun Primary is part of the Knightswood New Learning Community.[5]