The Royal Naval Auxiliary Service (RNXS) was a uniformed, unarmed, civilian volunteer service, administered and trained by the Royal Navy to operate in the ports and anchorages of the UK in an emergency. Although the abbreviated title would logically have been RNAS this abbreviation had long been taken by the various Royal Naval Air Stations, so RNXS it was. It maintained training units, and vessels at most major ports in the UK. and was formed in 1963 from the amalgamation[1] of the Royal Naval Mine-watching Service (RNMWS) and Admiralty Ferry Crew Association[2] in response to the perceived nuclear threat to British ports. The service was disbanded on 31 March 1994 due to Ministry of Defence (MOD) cuts.[3] Most vessels from its fleet were transferred to the Royal Navy or sold,[4] with the exception of XSV Loyal Volunteer, which was struck by a RO-RO ferry while berthed in Ipswich Harbour and was later scrapped.[4]

RNXS personnel, known as auxiliarymen regardless of gender, were to be readily available to assist in the tasks of evacuating major ports and dispatching larger and faster merchant vessels overseas in case of an attack on the UK. Any remaining ships were to be dispersed to safe anchorages along the coasts or at nearby islands. Formation, planning and sailing of convoys were tasks undertaken in the PHQs by RNXS staff working within overall dedicated RNR control during exercises. The communications personnel operated the Communications Centre connected via teleprinter and, latterly computer, to all UK MOD Communications Nodes and, unassisted, performed these tasks solely within the RNXS structure on behalf of the overall PHQ Command and Naval Officer In Command (NOIC).

For some of these purposes, the RNXS operated a small fleet of inshore vessels. Initially, the vessels were 45 ft and 61.5 feet Motor Fishing Vessels. These smaller boats were soon replaced by ten inshore minesweepers (Ham Class). R.N.X.S. vessel names were prefixed 'XSV' for Auxiliary Service Vessel. The minesweepers were de-armed and converted to enable larger training crews to be embarked. The 20 mm Oerlikon Cannon or 40mm Bofors guns were removed but the mounts were kept. Over time, the minesweepers were replaced by fleet tenders, the "Loyals".[5][4][6] Most of this class of ships' names were prefixed 'Loyal' apart from XSV Supporter, whose home port was Belfast, and, given Irish political tensions at the time, the prefix "Loyal" was dropped.[7] The RNXS operated eleven purpose-built fleet tenders[7] and various other small craft. In 1990, a specific threat of port attack by subversive and/or Special Forces was identified and to help to counter this threat, the RNXS received 4 of "P2000" fast patrol craft from the fourteen built for the Royal Navy[8] And these P2000s are still in service, as commissioned warships at University Royal Naval Units. 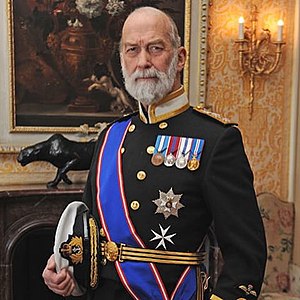 The sailing of merchantmen both overseas and coastal sailings involved setting up assembly anchorages where ships might be formed into convoys, a naval escort or surveillance for information on routing, intelligence, and communications. Auxiliarymen were required at assembly anchorage control to assist in these tasks.[1]

First, to observe, plot and report the fall of mines laid by enemy aircraft in port approaches and main waterways. Second, to provide the basic local organisation for naval officers in charge at strategic ports around the UK in war.

These tasks were not new, indeed they had been performed by naval and merchant naval personnel throughout the past centuries. The nuclear threat, however, had cut the time available to the Royal Navy, and the Merchant Navy had to be developed or adapted to cope.

In 1963 the Royal Mine-watching Service assumed a new role and name with responsibilities to provide staff to support the Navy in the various port headquarters around the UK that would be set up in a national emergency or war.

One of the Royal Navy's major tasks is the protection of shipping, and the RNXS played a non-combatant, but important, role in support of its parent Navy by manning port headquarters in major ports and anchorages around the United Kingdom. they were to be available to assist in the tasks of evacuating major ports, and dispatching larger and faster merchant vessels overseas in case of an attack on the UK. Any remaining ships were to be dispatched to safe anchorages along the coasts or at nearby islands.

Because merchant vessels would be travelling overseas in time of war, further tasks involved the setting up assembly anchorages, where ships could be formed into convoys ready for a naval escort. RNXS personnel were required at these assembly anchorages to assist in routing of vessels, intelligence, and communications both ashore and afloat. The Service also provided craft and crews to support the Navy in these ports and anchorages. These craft ranged from Ex Inshore Minesweepers, Fleet Tenders (Loyal class[6][5][4]) to fast Patrol Boats (P2000 or the shortened P20), permanently on loan to the service. The craft were normally based in Naval Dockyards for the necessary maintenance and technical support from the Royal Maritime Auxiliary service but they were manned entirely by the RNXS crew.

These craft were at sea most weekends for practical training, and also took part in national and NATO exercises, as well as local and out-of-area training cruises. The craft took part in fleet reviews; and have been used in the clearance of oil pollution; search and rescue and many other tasks.

The Ensign was originally created in 1954 for the Royal Naval Mine-watching Service, but when the service was amalgamated with the Admiralty Ferry Crews Association, to become the Royal Naval Auxiliary Service (RNXS) in 1963,[10] the flag inscription was altered to reflect the name change.

RAF Pitreavie Castle[11] near Dunfermline, Fife, was the Headquarters of the Scotland, Northern Ireland & N.E England, RNXS Group, consisting of both permanent and volunteer staff

The RNXS accepted women among its crews before the Royal Navy did. The first female skipper was Denise St Aubyn Hubbard in 1978.[1][3]

The men and women of the RNXS, or auxiliary-men as they were known, were between the ages of 21 and 60 and came from various backgrounds as civilians or prior service personnel.

The RNXS had a pleasant family flavour and in many units were husbands and wives, sons and daughters[3] training together for the job best suited to former experience and physical abilities.[3]

Those who served in the RNXS were volunteer reservists and are therefore veterans of Her Majesty's Armed Forces and are eligible to receive a Veterans Badge from the UK Ministry of Defence, upon application.[13]

The day after the Royal Naval Auxiliary Service was disbanded on 31 March 1994, its members formed the Maritime Volunteer Service (MVS)

Of the 93 Ham Class minesweepers built in the 1950s for the RN, and commissioned in 1956 (none of which saw active service) ten were later allocated in 1964 to the newly formed RNXS: 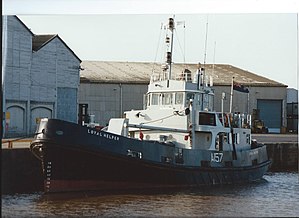 The Loyal class fleet tenders were purpose built in the late seventies by Richard Dunston[15][5] of Thorn, South Yorkshire, as training vessels for the RNXS, they were based on a proven MOD/RMAS design for supply tenders

However, in the RNXS version the hold was converted at build stage[5] for extra accommodation for RNXS crew. They had interior hatches down into the converted holds, now fitted with bunks and living quarters. Externally, they are very similar to the "Clovelly class" supply Fleet Tenders.

Following the disbandment of the RNXS, the Loyal Class fleet tenders and the P2000 were sold or reassigned within the Royal Navy[4]

On 18 October 1993 Malcolm Rifkind (Secretary of State For Defence 1992-1995) announced in the House of Commons that proposals[16] set out in June regarding the future of the Royal Naval Auxiliary Service and Royal Auxiliary Air Force had been confirmed, and as no role could be found for them they would be disbanded[17] the following year.[10]

On 18 February 1994 it was confirmed in the House of Commons as part of that same review that there was no continuing defence role for the Royal Naval Auxiliary Service, and after a properly managed rundown the RNXS would disband from 31 March 1994.[18]

A serious machinery space fire occurred on XSV Exploit[7] approximately 30 miles of Lundy island, at 0645 19 March 1994, as she was being transferred to RN Portsmouth from Greenock as part of the managed run down of the service by RNXS crew.

The Padstow lifeboat and the RAF SAR Helicopter from Chivenor, were scrambled, and a tanker en route to Milford Haven was diverted to help, but they were not needed. If not for the coolness, professionalism, and bravery of the RNXS skipper Area Officer K Warner (Thorne unit),[7] Charge Engineer Area Officer G Swan (Hartlepool unit),[4] and Mate, J Smith (Rosyth unit),[7] who entered the compartment 3 times in breathing masks when the Halon drenching system failed, to fight the fire with fire extinguishers,[7] the ship, and quite possibly lives, would have been lost.[7]

The fire was later attributed to a major mechanical failure of the starboard main engine,[4] resulting in a large hole in the sump casing.[4] The fire spread quickly to the air ducts, igniting various rubber coolant pipes causing thick acrid, toxic smoke.[7]

The mood in the service was further compounded with the loss of Loyal Volunteer, in Ipswich harbour[7] later that year, and was seen as a sad end to a faithful vessel, and Aux Lt Cdr R.A Hare noted,[7] "That this should be the fate of Loyal Volunteer, was not without its significance".

Not all of the members of the RNXS were lost for good when the RNXS disbanded. Some 2,000 former members of the RNR and RNXS formed the Maritime Volunteer Service, a civilian but uniformed organisation,[19] as a national maritime training organisation, with charitable status. Designed to perpetuate maritime skills, in order to continue and develop those skills it has taken over and expanded many RNXS roles.[19] Four years after its formation in 1994, the Maritime Volunteer Service was officially recognised by the Royal Navy. The decision was announced by Dr John Reid, the Armed Forces Minister in 1998. HRH Prince Michael of Kent is the organisation's Royal Patron.[20]