The Royal Maritime Auxiliary Service (RMAS) was a British Government agency which ran a variety of auxiliary vessels for Her Majesty's Naval Service (incl. Royal Navy, Royal Marines) and the Royal Fleet Auxiliary. The service from 2009 has been run by Serco and is known as Serco Marine Services.

In the 1990s, marine services were put out to commercial tender by the Ministry of Defence Warship Support Agency (now absorbed into the Defence Equipment and Support organisation) and by 1996, all tugs, lifting craft, various tenders and management of HMNB Devonport, Portsmouth and Clyde were operated by Serco Denholm.[2]

By the mid 2000s, it was decided that the Royal Maritime Auxiliary Service would no longer provide marine services to HM Naval Service, and it would instead be delivered under a Private Finance Initiative instead. Serco were quickly declared preferred bidders and the RMAS was disbanded on 31 March 2008.[3][4]

RMAS vessels carried the ship prefix "RMAS" and auxiliary (A) or yard (Y) pennant numbers. They also had a distinctive livery or colour-scheme, namely: black hulls with white beading and buff-coloured upperworks. Below is a list of vessels previously operated by the Royal Maritime Auxiliary Service. A number of the vessels listed below were later transferred over to Serco Marine Services who continue to provide 'marine services' in support of Her Majesty's Naval Service. 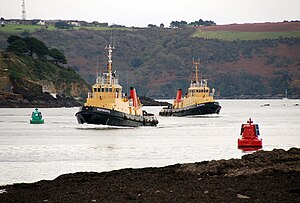 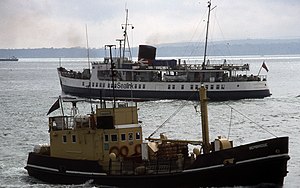 Clovelly-class Harlech at Exeter, England, in 2004

Dive tender Ilchester at Wick, Scotland, in 2004, on her way from Rosyth to Holyhead during the closure of the Caledonian Canal