listen) is a large naval dockyard on the Firth of Forth at Rosyth, Fife, Scotland, owned by Babcock Marine, which formerly undertook refitting of Royal Navy surface vessels and submarines. Before its privatisation in the 1990s it was formally the Royal Naval Dockyard Rosyth. Its primary role is now as integration site for the Royal Navy's newest aircraft carriers - the Queen Elizabeth-class. 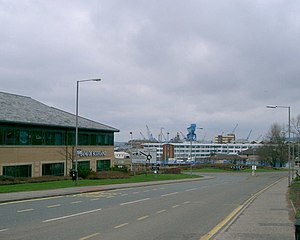 Cranes at the Rosyth Dockyard

Construction of the dockyard by civil engineers Easton, Gibb & Son commenced in 1909. At the time, the Royal Navy was strengthening its presence along the eastern seaboard of Great Britain due to a naval arms race with Germany.[1] 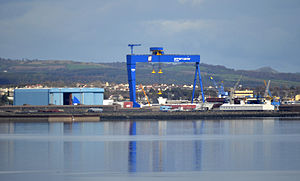 The new Goliath crane at the Dockyard, used for the current assembly of the Royal Navy's new 65,000 tonne aircraft carriers.

Babcock Thorn, a consortium operated by Babcock International and Thorn EMI, was awarded the management contract for Rosyth dockyard in 1987; with Rosyth Dockyard becoming a government owned, contractor run facility. This contract was awarded in parallel with Devonport Management Limited's contract to run Devonport Dockyard, Plymouth. In 1993 the Ministry of Defence announced plans to privatise Rosyth. Babcock International, who had bought out Thorn's share of the original Babcock Thorn consortium, was the only company to submit a bid and after protracted negotiations purchased the yard in January 1997.[3]

In 1984 Rosyth was chosen as the sole location for refitting the Royal Navy's nuclear submarine fleet (a role it was already specialising in), and in 1986 extensive rebuilding commenced to facilitate this new role. However, in 1993, the government switched the refitting role to Devonport Dockyard.[4]

Seven nuclear submarines were stored at Rosyth in 2007:[5] 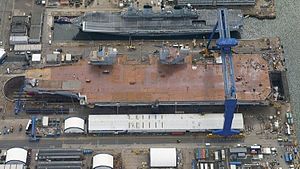 HMS Queen Elizabeth under construction at Rosyth (alongside HMS Illustrious)

The Royal Navy's two Queen Elizabeth-class carriers are being constructed across six UK shipyards, with final assembly at Rosyth.[6]

Administration of the dockyard

In the Royal Naval Dockyards, admiral-superintendents ceased to be appointed after 15 September 1971, and existing post-holders were renamed port admirals.[8]

Note: These officers reported to the Flag Officer Scotland and Northern Ireland