Flavius Romulus Augustus (c. AD 460 – after 476, possibly still alive as late as 507),[3] known derisively and historiographically as Romulus Augustulus, was the Roman emperor who ruled the Western Roman Empire from 31 October 475 until 4 September 476. He is often described as the "last Western Roman emperor", though some historians consider this to be Julius Nepos. His deposition by Odoacer traditionally marks the end of the Roman Empire in the West, the end of Ancient Rome, and the beginning of the Middle Ages in Western Europe.

Although he, as all other emperors, adopted the name Augustus upon his accession, he is better remembered by his derisive nickname Augustulus.[4] The Latin suffix -ulus is a diminutive; hence Augustulus effectively means "Little Augustus".[5] The name Romulus was also changed derisively to Momyllus meaning "little disgrace".[6]

The historical record contains few details of Romulus's life. He was the son of Orestes, a Roman who once served as a secretary in the court of Attila the Hun before coming into the service of Julius Nepos in AD 475. In the same year he was promoted to the rank of magister militum, but then led a military revolt that forced Nepos to flee into exile. With the capital of Ravenna under his control, Orestes appointed his son Romulus to the throne despite the lack of support from the eastern court in Constantinople. Romulus, however, was little more than a child and figurehead for his father's rule. After ten months in power, during which time his authority and legitimacy were disputed beyond Italy, Romulus was forced to abdicate by Odoacer, a Germanic foederatus officer who defeated and executed Orestes. After seizing control of Ravenna, Odoacer sent the former emperor to live in the Castellum Lucullanum in Campania, after which he disappears from the historical record.

The Western and the Eastern Roman Empire in 476. 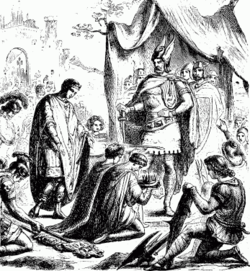 Romulus Augustus resigns the crown. Drawing from the Young Folks' History of Rome, 1880.

Romulus's father Orestes was a Roman citizen, originally from Pannonia, who had served as a secretary and diplomat for Attila the Hun and later rose through the ranks of the Roman army.[7] The future emperor was named Romulus after his maternal grandfather, a nobleman from Poetovio in Noricum. Many historians have noted the coincidence that the last western emperor bore the names of both Romulus, the legendary founder and first king of Rome, and Augustus, the first emperor.[8] Though this is not as coincidental as it may seem; all emperors bore the name Augustus as it was part of the imperial title.[9]

Orestes was appointed Magister militum by Julius Nepos in 475. Shortly after his appointment, Orestes launched a rebellion and captured Ravenna, the capital of the Western Roman Empire since 402, on 28 August 475. Nepos fled to Dalmatia, where his uncle had ruled a semi-autonomous state in the 460s.[10] Orestes, however, refused to become emperor, "from some secret motive", said historian Edward Gibbon.[11] Instead, he installed his son on the throne on 31 October 475.[citation needed]

The empire Augustus ruled was a shadow of its former self and had shrunk significantly over the previous 80 years. Imperial authority had retreated to the Italian borders and parts of southern Gaul: Italia and Gallia Narbonensis, respectively.[12] The Eastern Roman Empire treated its western counterpart as a client state. The Eastern Emperor Leo, who died in 474, had appointed the western emperors Anthemius and Julius Nepos, and Constantinople never recognized the new government. Neither Zeno nor Basiliscus, the two generals fighting for the eastern throne at the time of Romulus's accession, accepted him as ruler.[5]

As a proxy for his father, Romulus made no decisions and left no monuments, although coins bearing his name were minted in Rome, Milan, Ravenna, and Gaul.[5] Several months after Orestes took power, a coalition of Heruli, Scirian, and Turcilingi mercenaries demanded that he give them a third of the land in Italy.[11] When Orestes refused, the tribes revolted under the leadership of the Scirian chieftain Odoacer. Orestes was captured near Piacenza on 28 August 476 and swiftly executed.[citation needed]

Odoacer advanced on Ravenna, capturing the city and the young emperor after the short and decisive Battle of Ravenna. Romulus was compelled to abdicate the throne on 4 September 476. This act has been cited as the end of the Western Roman Empire, although Romulus's deposition did not cause any significant disruption at the time. Rome had already lost its hegemony over the provinces, Germanic peoples dominated the Roman army, and Germanic generals like Odoacer had long been the real powers behind the throne.[13] Italy would suffer far greater devastation in the next century when Emperor Justinian I reconquered it in the Gothic War.[14]

After the abdication of Romulus, the Roman Senate, on behalf of Odoacer, sent representatives to the Eastern Roman Emperor Zeno, whom it asked to formally reunite the two halves of the Empire, with Odoacer as the "protector of the state": "The West, they declared, no longer required an Emperor of its own: one monarch sufficed for the world..."[15] Zeno was asked to make Odoacer a patrician, and administrator of Italy in Zeno's name. Zeno pointed out that the Senate should rightfully have first requested that Julius Nepos take the throne once more, but he nonetheless agreed to their requests as a fait accompli. Odoacer, already the de facto ruler of Italy, now ostensibly ruled de jure in Zeno's name.[16]

The ultimate fate of Romulus is a mystery. The Anonymus Valesianus wrote that Odoacer, "taking pity on his youth" (he was about 16), spared Romulus's life and granted him an annual pension of 6,000 solidi before sending him to live with relatives in Campania.[5][17] Jordanes and Marcellinus Comes say Odoacer exiled Romulus to Campania but do not mention any financial support from the Germanic king.[5][17]

The sources do agree that Romulus took up residence in the Castel dell'Ovo (Lucullan Villa) in Naples, now a castle but originally built as a grand sea-side house by Lucullus in the 1st century BC,[17] fortified by Valentinian III in the mid-5th century. From here, contemporary histories fall silent. In the History of the Decline and Fall of the Roman Empire, Edward Gibbon notes that the disciples of Saint Severinus of Noricum were invited by a "Neapolitan lady" to bring his body to the villa in 488; Gibbon conjectures from this that Augustulus "was probably no more."[18] The villa was converted into a monastery before 500 to hold the saint's remains.[17]

Cassiodorus, then a secretary to Theodoric the Great, wrote a letter in 507 to a "Romulus" confirming a pension.[5] Thomas Hodgkin, a translator of Cassiodorus' works, wrote in 1886 that it was "surely possible" the Romulus in the letter was the same person as the last western emperor.[19] The letter would match the description of Odoacer's coup in the Anonymus Valesianus, and Romulus could have been alive in the early sixth century. But Cassiodorus does not supply any details about his correspondent or the size and nature of his pension, and Jordanes, whose history of the period abridges an earlier work by Cassiodorus, makes no mention of a pension.

Julius Nepos on a gold tremissis

Some sources suggest that Julius Nepos claimed to hold the title of emperor legally when Odoacer took power. However, few of Nepos' contemporaries were willing to support his cause after he had fled to Dalmatia. Some historians regard Julius Nepos, who ruled in Dalmatia until he was murdered in 480, as the last lawful Western Roman Emperor.[20]

Following Odoacer's coup, the Roman Senate sent a letter to Zeno that stated that "the majesty of a sole monarch is sufficient to pervade and protect, at the same time, both the East and the West".[21] While Zeno told the Senate that Nepos was their lawful sovereign, he did not press the point and accepted the imperial insignia brought to him by the Senate.[16][21]

As the last Western Roman emperor before the traditionally agreed-upon end of the Western Roman Empire, Romulus has been portrayed several times in film and literature; the play Romulus the Great (1950), by Friedrich Dürrenmatt, focuses on the reign of "Romulus Augustus" and the end of the Roman Empire in the West.[22] The 2007 film The Last Legion, and the novel on which it is based, includes a heavily fictionalized account of the reign and subsequent life of Romulus Augustus; escaping captivity with the aid of a small band of loyal Romans, he reaches Britain, where he eventually becomes Uther Pendragon.[23]