Roath Brook flowing through Roath Park in the snow

Roath (Welsh: Y Rhath) is a district and community to the north-east of the city centre of Cardiff, capital of Wales. There is no community council for the area which is mostly covered by the Plasnewydd electoral ward, and stretches from Adamsdown in the south to Roath Park in the north.[1]

Its main shopping streets are Albany Road, City Road, and Wellfield Road. The area is characterised by its several tree-lined avenues and Victorian era terraced streets. Roath houses a very diverse population including a large number of students, being very close to the main university campuses, a large ethnic minority population and many young professionals. Parts of Roath are among the most affluent districts of Cardiff[2][citation needed], although subdivision of the large Victorian properties is starting to occur in the areas at the south end of the district.

Its close proximity to the city centre, its number of local amenities, churches, shops and restaurants and public houses and the famous Roath Park make it a popular area to live.[3]

Y Rhath (Rahat, Raath 13th c.) is likely a development of the Brythonic word for ramparts, cognate with the Irish word ráth (earthwork, fortification), the latinised form of this word (Ratae) appears elsewhere in Roman Britain (such as Ratae Corieltauvorum). This may suggest a pre-existing Iron Age settlement, likely on the site of the old manor house which was surrounded by earthworks and a ditch for centuries.[4]

Alternatively, it could derive from the name given to the Roman settlement in Cardiff, Ratostabius.[citation needed]

Roath Court is a nineteenth-century villa on the site of the medieval manor house of Roath.[5] Since 1952 it has been a funeral home.[6] Its Georgian portico, designed by Robert Adam in 1766 for Bowood House, Wiltshire, was moved there in 1956.[5] 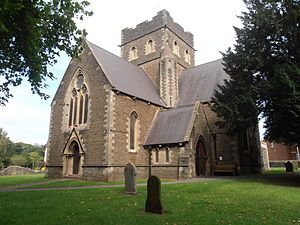 Roath contains the Church of Saint Margaret of Antioch, built in 1870 on the site of an earlier Norman chapel and the new Gothic revival church. Designed by Llandaff architect John Prichard on a Greek Cross plan, the latter was financed totally by the third Marquess of Bute, in spite of his conversion to Catholicism in 1868. Inside is an opulent mausoleum housing tombs of nine members of the Bute family, including the First Marquess and his wives. The tower of St Margaret's was finally completed in 1926.

Roath once had a railway station on the South Wales Main Line, but this closed in 1917.

Prior to the 2010s the community was known as Plasnewydd, though was renamed as Roath, being a name that was more widely recognised.[7]

Since 2009 the annual Made in Roath arts festival has taken place in October. The event showcases art, music, performance and literature in a variety of venues including peoples' homes.[12] Between 2013 and 2016, local organisers Wayne Courtney and Nathan Wyburn have hosted the 'Roath Bake Off'[13] festival in St Andrews United Reformed Church, Roath. In December 2018, the duo announced that the event would be revived for 2019[14] as part of the campaign to raise funds for the church it is held in.