They are normally the largest of all riverine warships in river flotillas, and mount the heaviest weapons. The name originated from the US Navy's USS Monitor, which made her first appearance in the American Civil War, and being distinguished by the use of revolving gun turrets.

On 18 December 1965, the US Navy, for the second time in one hundred years, authorized the reactivation of a brown-water navy for riparian operations in South Vietnam. In July 1966, Secretary of Defense Robert S. McNamara authorized the formation of a Mobile Riverine Force (MRF);[1] a force that would bring back the heavily armored single-turret river monitor.

River monitors were used on inland waterways such as rivers, estuaries, deltas and lakes. Usually they had a shallow draft which was necessary for them to be able to operate in enclosed waters; but their displacement, size and draft varied depending on where they were used.

Most river monitors were lightly armored although this varied, with some carrying more armor. Exceptional examples, however, most notably the Royal Navy's Lord Clive-class monitors, which could operate in coastal or certain riparian/estuarine situations, bore extra-thick armor plating and heavy shore-bombardment guns, up to a massive 18 inches (457 mm) in size. Typically, however, river monitors displayed a mixture of gun sizes from 3-inch (75 mm) to 6-inch (152 mm), plus machine guns. This type of vessel overlaps with the river gunboat. 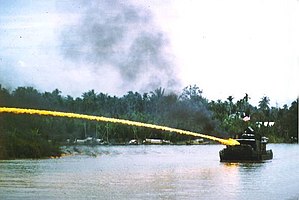 On Asian rivers, the Amur Military Flotilla on the Amur used large Taifun-class river monitors of the Imperial Russian Navy from around 1907; the Imperial Japanese Navy captured some of these ships in 1918.[8][9] They were up to 1,000 tons displacement, armed with 130 mm guns. Some of these Russian monitors, such as the recommissioned Sverdlov, were still in use by the Soviet Navy in the 1945 Soviet invasion of Manchuria.[10]

During the Vietnam War, the United States Navy, in conjunction with other riverine craft, commissioned 24 monitors, ten of which mounted a single 40 mm cannon in a Mk 52 turret, eight which mounted an M49 105 mm howitzer within a T172 turret,[11] and six monitors which mounted two M10-8 flamethrowers from two M8 turrets located on either side of the vessel's 40 mm cannon. Referred to as "river battleships"[12] by their crews, they provided the firepower of the brown-water navy. 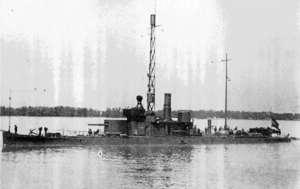 On the Danube, river monitors were employed during World War I by Austria-Hungary and Romania. The Austro-Hungarian river monitor Bodrog fired the first shots of World War I, against the city of Belgrade, and later also fought in the Romanian Campaign, notably during the Flămânda Offensive in October 1916, when she was damaged. Another river monitor, Körös, was also heavily damaged by Romanian artillery, taking 12 hits and ran aground after her steam lines were severed.[13] On 22 September 1917, the Enns-class river monitor Inn was sunk by a Romanian mine near Brăila.[14][15][16] She was refloated but her repairs were not completed before the War ended, and she was eventually handed over to Romania as war reparation, being renamed Basarabia.[17]

During World War I, Romania had the largest river monitors on the Danube, displacing 680 tons, armed mainly with three 120 mm guns and protected by at least 70 mm of armor around the belt, turrets and conning tower. They were built in sections at Triest in Austria-Hungary, transported to Romania by rail and assembled by the Romanians at the Galați shipyard in 1907-1908.[18][19][20] They did not engage enemy ships, however, instead they were used to support ground forces during the Battle of Turtucaia and the First Battle of Cobadin, and also took part in the 1917 campaign, contributing to the stemming of the enemy advance.[21] During the Interwar period, the Romanian Danube Flotilla was the most powerful riverine fleet in the world.[22] In 1924, the Romanian river monitors helped suppress the Tatarbunary uprising, along with the entire Romanian Danube Flotilla. 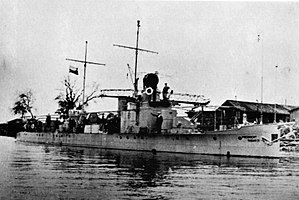 President Masaryk, the flagship of the Czechoslovak River Flotilla

Czechoslovakia had one monitor, President Masaryk, of about 200 tons displacement. She was captured by the Germans in 1939 and commissioned as Bechelaren. She was extensively rebuilt in 1943 and her armament was also modified in February 1945. She supported German troops during Operation Spring Awakening and later fought in Austria, sinking two Soviet gunboats.

Yugoslav river monitors were former Austro-Hungarian warships received as reparations. They were renamed Vardar (ex-Bosna), Sava (ex-Bodrog), Drava (ex-Enns) and Morava (ex-Körös). After the fall of Yugoslavia in April 1941, Morava (renamed Bosna) and Sava were commissioned by the newly created Independent State of Croatia.

Hungary also used river monitors, five of them notably taking part during the Kozara Offensive in 1942.

The Brazilian river monitor Parnaíba was built for the navy in Rio de Janeiro and commissioned on 9 March 1938. She participated in the Second World War and is currently the world's oldest commissioned warship still in active service.[23] She is assigned to the Brazilian navy's Mato Grosso Flotilla.