From Encyclopedia Britannia
Jump to navigation Jump to search
For other naval ship classes of the same name, see River class (disambiguation).

Mersey visits Guyana during her Caribbean deployment in 2016

In early 2001, the Ministry of Defence placed an order with Vosper Thornycroft (VT) for three River-class offshore patrol vessels to replace the Island class.[1] It was understood that the higher availability rates of the River class (up to 300 days per year), would enable the three new ships to perform the duties of the five ships they replaced. The Royal Navy initially chartered (or leased) the ships under a five-year, £60 million contract from the builder VT.[1] As part of the contract, VT would be responsible for all maintenance and support during the charter period. This contract was renewed in January 2007 for another five years at £52 million.[1] However, in September 2012, instead of renewing the contract again, it was announced by the Defence Secretary Philip Hammond that the Ministry of Defence had purchased the vessels for £39 million.[1][10]

The River class are significantly larger than the Island-class vessels and have a large open deck aft allowing them to be fitted with equipment for a specific role, which can include fire-fighting, disaster relief and anti-pollution work. For this purpose, a 25 tonne capacity crane is fitted. In addition, the deck is strong enough for the transport of various tracked and wheeled light vehicles, or an LCVP.[citation needed] The class are primarily used with the Fishery Protection Squadron and EEZ patrol.[1]

In 2009, the running costs for the River class were estimated at £20 million: "The average running cost... of [the] River class is £20 million... These figures, based on the expenditure incurred by the Ministry of Defence in 2009–10, include maintenance, safety certification, military upgrades, manpower, inventory, satellite communication, fuel costs and depreciation."[11]

In February 2005, the Ministry of Defence placed an order with VT for the charter of a fourth modified River-class offshore patrol vessel.[1] This fourth ship, Clyde, was constructed at Portsmouth Dockyard and replaced the two Castle-class patrol vessels for duties around the South Atlantic and the Falkland Islands. To fulfill this role, Clyde incorporates several modifications, including an extended length 81.5 m (267 ft 5 in) hull, a top speed of 21 kn (39 km/h), a 30 mm cannon, two miniguns and mountings for five general purpose machine guns.[1] Clyde's elongated hull permits a 20-metre strengthened flight deck able to accommodate a Merlin-sized helicopter. The ship has a full load displacement between 1,850[1] and 2,000 tonnes.[12][13]

Clyde is capable of temporarily embarking up to 110 troops and their equipment and inserting them anywhere on the Falkland Islands.[1] Clyde has a complement of 36.[1]

On 24 April 2017, in a written answer to a question raised by Sir Nicholas Soames, Parliamentary Under-Secretary for Defence Harriet Baldwin stated Severn would be decommissioned in 2017, with Mersey and Clyde following in 2019.[14] As of October 2017, no date has been given Tyne's decommissioning.

Severn was decommissioned in a ceremony at Portsmouth on 27 October 2017.[15]

In March 2018, Baldwin's successor as Parliamentary Under-Secretary for Defence, Guto Bebb, revealed that £12.7M had been allocated from the EU Exit Preparedness Fund to maintain the three Batch 1 ships, should they be needed to control and enforce UK waters and fisheries following the United Kingdom's withdrawal from the European Union.[16]

On 6 November 2013 it was announced that the Royal Navy had signed an Agreement in Principle to build three new offshore patrol vessels, based on the River-class design, at a fixed price of £348 million including spares and support.[17] In August 2014, BAE Systems signed the contract to build the ships at their BAE Systems Maritime – Naval Ships shipyards in Glasgow on the River Clyde. The Ministry of Defence stated that the Batch 2 ships are capable of being used for constabulary duties such as "counter-terrorism, counter-piracy and anti-smuggling operations".[18] According to BAE Systems, the vessels are designed to deploy globally, conducting anti-piracy, counter-terrorism and anti-smuggling tasks currently conducted by frigates and destroyers.[19] Steel was cut on 10 October 2014[4] and they are expected to enter service starting 2017, with the last being delivered by the end of 2018.[17] The ships are built at the BAE Systems Govan shipyard, then transferred to the BAE Systems Scotstoun shipyard for fitting out.[20]

The Batch 2 ships are fundamentally different in appearance and capabilities from the preceding Batch 1. Notable differences include the 90.5 metres (296 ft 11 in) long hull,[2] a top speed of 24 knots (44 km/h; 28 mph),[2] Merlin-capable flight deck,[2] a displacement of around 2,000 tonnes[4][5] and greatly expanded capacity for accommodating troops.[2] The Batch 2 ships also have a different (full width) superstructure, and a fundamentally different above-water hullform shape (greater bow flare, different & less-pronounced forward knuckle line compared to the Batch 1 ships, lack of the distinctive fwd & aft bulwarks of the Batch 1 vessels). The class is also fitted with the Kelvin Hughes SharpEye integrated radar system for navigation,[7] the Terma Scanter 4100 2D radar for air and surface surveillance,[8] and a BAE CMS-1 Combat Management System.[5][9] The Batch 2 ships therefore arguably represent a distinctly separate class to the preceding Batch 1.

Batch 2 are also the first Royal Navy ships fitted with the BAE Systems Shared Infrastructure operating system.[5] BAE describes Shared Infrastructure as "a state-of-the-art system that will revolutionise the way ships operate by using virtual technologies to host and integrate the sensors, weapons and management systems that complex warships require. Replacing multiple large consoles dedicated to specific tasks with a single hardware solution reduces a number of spares required to be carried onboard and will significantly decrease through-life costs."[21]

The class has been criticised in Parliamentary evidence for: lacking a helicopter hangar (even a telescopic hangar), something that will limit utility of the helicopter deck by preventing embarkation of a helicopter for anything other than very short periods; lacking a medium calibre gun (such as 76 mm); and poor value for money. It is argued that because of the lacking features (which could have been incorporated for the price) the vessels will not be as capable in the ocean-going patrol capacity as claimed.[22] Indeed a critique of the class is that the reasoning behind their commissioning was simply to ensure that public money continued to support BAE dockyards and jobs prior to the ordering of the Type 26 warship. [23]

The Batch 2 ships for the Royal Navy include some 29 modifications and enhancements over the Amazonas-class corvette built by BAE Systems for the Brazilian Navy.[24] The Royal Navy ships are built to more stringent naval standards, with features such as magazine protection, improved hull integrity and fire safety modifications, as well as greater redundancy.[24]

The first, HMS Forth, was christened at a ceremony at the BAE Systems Scotstoun shipyard in Glasgow on 9 March 2017.[25]

Forth is expected to replace Clyde as Falkland Islands guardship.[26]

The Strategic Defence and Security Review 2015 announced a further purchase of two new Batch 2 ships at an undisclosed date in the future, and a total fleet of 'up to six' offshore patrol vessels.[27] Expectation at the time was that this would encompass the three Batch 2 ships announced in 2013, the two additional Batch 2 ships announced in the 2015 defence review, and the modified Batch 1 ship, Clyde. The three Batch 1 ships without flight decks would be withdrawn in favour of the newer ships.[28] The defence review also suggested that the ships could be used to increase the Royal Navy’s ability to defend UK interests at home and abroad.[27]

During a Defence Select Committee in July 2016, the First Sea Lord Admiral Sir Philip Andrew Jones indicated that the option for a fleet of 'up to six' offshore patrol vessels had been reduced to five, with Clyde being replaced by one of the new Batch 2 ships.[29] The First Sea Lord also elaborated on the potential uses for the Batch 2 ships overseas, including the possibility of forward basing an extra ship at the Falklands Islands, or forward basing it elsewhere.[29] A £287m order, for two new ships and support for all five Batch 2 ships, was announced on 8 December 2016.[30] HM Ships Tamar and Spey will join the fleet in 2021.[6]

On 21 April 2017, with construction of HMS Tamar already under way, the first steel was cut for HMS Spey. Like their predecessors, the ships are constructed at the BAE Systems Govan shipyard, then transferred to the Scotstoun shipyard for fitting out.[20]

Three vessels of the Amazonas-class corvette based on the River class were built by BAE in the United Kingdom. They were originally intended to be exported for use by the Trinidad and Tobago Defence Force; however, the Government of the Republic of Trinidad and Tobago cancelled the order in September 2010. In December 2011 it was reported that the Brazilian Navy were interested in buying the vessels, and possibly up to five additional vessels of the same design.[31] The sale, for £133 million (compared to an original £150m), was then confirmed on 2 January 2012.[32]

HTMS Krabi is a modified River-class vessel built for the Royal Thai Navy. The ship was built in Thailand but with design, technology transfer and support provided by BAE Systems. In January 2016 it was announced that a contract had been signed to provide the Royal Thai Navy with a second ship based on the River-class OPV to be built under license at Bangkok Dock Company. The precise design has not yet been announced but it will be a 90 m vessel.[33] 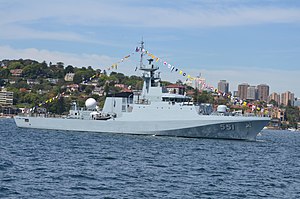 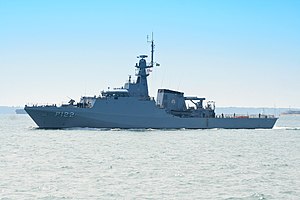