From Encyclopedia Britannia
Jump to navigation Jump to search
For other ships with the same name, see RMS Carmania.

RMS Carmania was a Cunard Line transatlantic steam turbine ocean liner. She was launched in 1905 and scrapped in 1932. In World War I she was first an armed merchant cruiser (AMC)[1] and then a troop ship.

Carmania was the sister ship of RMS Caronia, although the two ships had different machinery. When new, the pair were the largest ships in the Cunard fleet.[2]

Leonard Peskett designed Carmania. John Brown & Company built her, launching her on 21 February 1905[3] and completing her that November.[4]

Caronia, which was launched the year before, had two screws and they were driven by quadruple-expansion engines.[6] The essentially identical ships with the two different sets of engines was an opportunity to compare operations and clarify the advantages and disadvantages of turbine engines.[5]

Another feature that differentiated the two liners was that Carmania had two tall forward deck ventilator cowls, which were absent on Caronia.

Carmania plied between Liverpool and New York from 1905 to 1910. In the spring of 1906 she took H. G. Wells to North America for the first time. He noted her size in a book about his travels, "This Carmania isn't the largest ship nor the finest, nor is to be the last. Greater ships are to follow and greater. The scale of size, the scale of power, the speed and dimensions of things about us alter remorselessly—to some limit we cannot at present descry".[8]

In June 1910 in Liverpool Carmania suffered a major fire in her passenger accommodation. Her structure and machinery were undamaged, and repairs were completed by 4 October.[2] 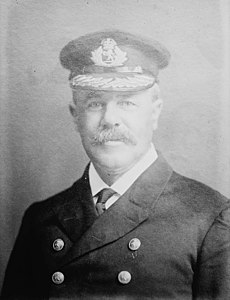 On an eastbound crossing in October 1913 Carmania answered a distress signal from Volturno to pick up survivors in a storm, which resulted in many awards for gallantry being presented to various members of her crew and Captain James Clayton Barr.[9]

In August 1914, after the outbreak of World War I, Carmania was converted into an AMC, armed with eight QF 4.7 inch Mk V naval guns. She was commissioned as HMS Carmania, with the pennant number M 55.[10]

Commanded by Captain Noel Grant she sailed from Liverpool to Shell Bay in Bermuda. On 14 September 1914 she engaged and sank the German merchant cruiser SMS Cap Trafalgar in the Battle of Trindade. At the time Cap Trafalgar's appearance had been altered to resemble Carmania.[11] Carmania suffered extensive damage and several casualties to her crew. 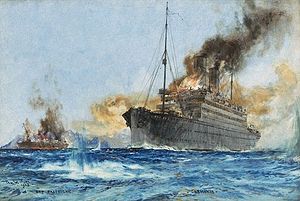 After repairs in Gibraltar, she patrolled the coast of Portugal and the Atlantic islands for the next two years. In 1916 she assisted in the Gallipoli campaign. From July 1916 she was a troop ship. After the war she took Canadian troops home from Europe.

By 1919 she had returned to passenger liner service. In 1923 Cunard had her refitted as a cabin class ship,[12] with her total accommodation reduced from 2,650 berths to 1,440. Caronia was similarly refitted, and the two sisters kept busy until the shipping slump[13] caused by the Great Depression after 1929. By 1930 Carmania's navigational equipment included submarine signalling and wireless direction finding.[4]

Carmania's bell is on display aboard the permanently moored HQS Wellington at Victoria Embankment, London.