P, or p, is the sixteenth letter of the modern English alphabet and the ISO basic Latin alphabet. Its name in English is pee (pronounced /ˈpiː/), plural pees.[1]

The Semitic Pê (mouth), as well as the Greek Π or π (Pi), and the Etruscan and Latin letters that developed from the former alphabet, all symbolized /p/, a voiceless bilabial plosive. 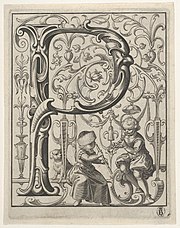 Late Renaissance or early Baroque design of a P, from 1627

In English orthography and most other European languages, ⟨p⟩ represents the sound /p/.

A common digraph in English is ⟨ph⟩, which represents the sound /f/, and can be used to transliterate ⟨φ⟩ phi in loanwords from Greek. In German, the digraph ⟨pf⟩ is common, representing a labial affricate /pf/.

Most English words beginning with ⟨p⟩ are of foreign origin, primarily French, Latin, Greek, and Slavic;[citation needed] these languages preserve Proto-Indo-European initial *p. Native English cognates of such words often start with ⟨f⟩, since English is a Germanic language and thus has undergone Grimm's law; a native English word with initial /p/ would reflect Proto-Indo-European initial *b, which is so rare that its existence as a phoneme is disputed.

However, native English words with non-initial ⟨p⟩ are quite common; such words can come from either Kluge's law or the consonant cluster /sp/ (PIE *p has been preserved after s).

In the International Phonetic Alphabet, /p/ is used to represent the voiceless bilabial plosive.

A bold italic letter p is used in musical notation as a dynamic indicator for "quiet". It stands for the Italian word piano.[2][3]