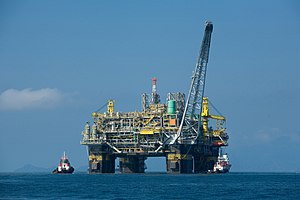 Offshore construction is the installation of structures and facilities in a marine environment, usually for the production and transmission of electricity, oil, gas and other resources. It is also called maritime engineering.

Construction and pre-commissioning is typically performed as much as possible onshore. To optimize the costs and risks of installing large offshore platforms, different construction strategies have been developed.

One strategy is to fully construct the offshore facility onshore, and tow the installation to site floating on its own buoyancy. Bottom founded structure are lowered to the seabed by de-ballasting (see for instance Condeep or Cranefree), whilst floating structures are held in position with substantial mooring systems.

Specialist floating hotel vessels known as flotels are used to accommodate workers during the construction and hook-up phases. This is a high cost activity due to the limited space and access to materials.

Oil platforms are key fixed installations from which drilling and production activity is carried out. Drilling rigs are either floating vessels for deeper water or jack-up designs which are a barge with liftable legs.[1] Both of these types of vessel are constructed in marine yards but are often involved during the construction phase to pre-drill some production wells. Other key factors in offshore construction are the weather window which defines periods of relatively light weather during which continuous construction or other offshore activity can take place. Safety is another key construction parameter, the main hazard obviously being a fall into the sea from which speedy recovery in cold waters is essential.