October is the tenth month of the year in the Julian and Gregorian Calendars and the sixth of seven months to have a length of 31 days. The eighth month in the old calendar of Romulus c. 750 BC, October retained its name (from the Latin and Greek ôctō meaning "eight") after January and February were inserted into the calendar that had originally been created by the Romans. In Ancient Rome, one of three Mundus patet would take place on October 5, Meditrinalia October 11, Augustalia on October 12, October Horse on October 15, and Armilustrium on October 19. These dates do not correspond to the modern Gregorian calendar. Among the Anglo-Saxons, it was known as Ƿinterfylleþ, because at this full moon (fylleþ) winter was supposed to begin.[1]

The last two to three weeks in October (and, occasionally, the first week of November) are the only time of the year during which all of the "Big Four" major professional sports leagues in the U.S. and Canada schedule games; the National Basketball Association begins its preseason and about two weeks later starts the regular season, the National Hockey League is about one month into its regular season, the National Football League is about halfway through its regular season, and Major League Baseball is in its postseason with the League Championship Series and World Series. There have been 19 occasions in which all four leagues have played games on the same day (an occurrence popularly termed a "sports equinox"), with the most recent of these taking place on October 27, 2019.[18] Additionally, the Canadian Football League is typically nearing the end of its regular season during this period, while Major League Soccer is beginning the MLS Cup Playoffs. 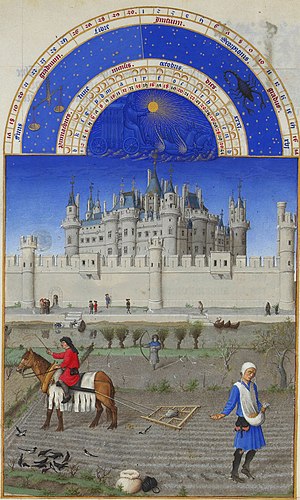 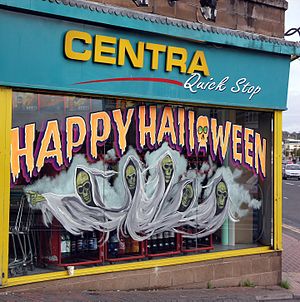 A shop in Derry decorated for Halloween