Map of the London Borough of Ealing, showing the location of Northolt, one of Ealing's seven major towns.

Northolt is a town in West London, England, spread across both sides of the A40 trunk road. It is 11 miles (17.7 km) west-northwest of Charing Cross and is one of the seven major towns that make up the London Borough of Ealing. It had a population of 30,304 at the 2011 UK census.

Archaeological evidence suggests that the settlement's origin was an 8th-century Saxon village close to Northolt Manor behind the present Court Farm Road.[4] It is mentioned in the Domesday Book as Northala, part of the Elthorne Hundred in the historic county of Middlesex, England. In 1066 the lord was Esger the constable, and in 1086 was Geoffrey de Mandeville.[5] Northolt Manor itself was built in the fourteenth century and provides much of the archeological information of the area from its excavations in the 1950s and onward. A Tudor barn built in 1595 from Smith's farm in Northolt was moved to Chiltern Open Air Museum and is now on display there.[6] In the early part of the 18th century farmland was enclosed in order to provide hay for the City of London, alongside more traditional crops such as peas and beans. Up to late Victorian times, the area was rural with predominantly arable crops being grown.

1795 saw parliamentary approval for construction of Paddington Arm of the Grand Union Canal. The route from Hayes to Paddington passes through Northolt, opening on 10 July 1801.[7] The Great Central Railway line (now the Chiltern Line) opened in 1906, passing through Northolt on its way from Marylebone to High Wycombe. However, it wasn't until 1926 that a station opened at Northolt Park. 1906 also saw the Great Western Railway's New North Main Line pass through south of Great Central Railway on its way to Birmingham. The following year Northolt Halt opened on it, eventually becoming Northolt station. In 1948 an extension to the Central line, transformed it into Northolt tube station.

Two important transport links run through Northolt: the Paddington Arm of the Grand Union Canal and the modern A40 road.

In the 21st century, a new large private housing development was built on the former site[citation needed] of the Taylor Woodrow company, adjacent to the Grand Union Canal. This development is known as "Grand Union Village" and incorporates a new canal boat marina.

Northala Fields in Northolt (view from A40)

Northolt is in the north-western corner of Ealing, bordering the boroughs of Harrow and Hillingdon. The centre of Northolt lies at an elevation of about 130 feet (40 m) above sea level. It is hillier in the north (up to about 200 feet (60 m)) whereas the south is lower, about 115 feet (35 m). The town is mainly suburban, with some industrial land to the east (by the Grand Union Canal), large green parts such as Lime Tree Park and Rectory Park, and semi-rural land to the west

Northolt is covered by two electoral wards of the London Borough of Ealing. Northolt Mandeville ward covers the main area of Northolt. Northolt West End ward covers the area south of the A40 road, including housing that is contiguous from Yeading directly to the south. 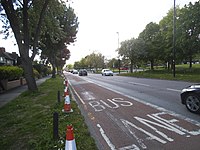 Mandeville Road (A312), the main throughfare of Northolt

While Northolt remained a rural, agricultural area in the 19th century, its population growth remained slow:

The rapid growth of the population in the mid-20th century can be explained by Northolt's growth as a dormitory town for nearby Ealing, and the construction in 1935 of the A40 road through the area. Modern family homes were built in the 1920s and 1930s. In the 1950s and 1960s, predominantly local authority rented housing was constructed. 3,423 council houses had been built in Northolt by 1963. Northolt tube station was opened in 1948 to serve the growing population of the area.

Anti-social behaviour has recently been the most common reported crime, followed by violent and sexual offences. Crime levels notably increased, by up to 50% between 2013 and 2014.[15]

The Royal Air Force station is situated in neighbouring South Ruislip in the London Borough of Hillingdon. Most early RAF airfields were named after the nearest railway station; in this case Northolt Junction, (now South Ruislip).

Racecourse Estate: this area was used for horse racing in the early 20th century

Northolt was famous for the pony racing which took place in Northolt Park. A one-and-a-half-mile (2.4 km) racecourse was constructed by Sir William Bass and Viscount Lascelles, and opened in 1929 by the Earl of Harewood and his wife the Princess Royal.

During the Second World War, the land was taken over and used as an army depot and prisoner of war camp. Despite numerous attempts to revive pony racing after the war the land was given over to housing construction. The Racecourse Estate was constructed between 1951 and 1955 in order to solve a severe housing shortage within the borough. The gates of the original racecourse remain in Petts Hill, and a section of the track can be observed as a long, flat stretch of land alongside Mandeville Road.

The constituency of Ealing North is currently represented by Labour and Co-operative Party Member of Parliament (MP)] James Murray, and has been since 2019 following the retirement of Stephen Pound.

Northolt is made up of two electoral wards (Northolt Mandeville and Northolt West End), as well as part of the electoral ward of North Greenford, which elect councillors to Ealing Council. As of 6 May 2010 the area is represented by five Labour councillors (three in West End and two in Mandeville) and one Conservative councillor.

At the same election Labour took control of Ealing Council from the Conservatives with a major swing against the Tories, which conflicted with the nationwide swing in the General Election.

Northolt comes under the London Assembly constituency of Ealing and Hillingdon which has one assembly member, currently Onkar Sahota (Labour), who was elected in May 2012.