The National Maritime Museum (NMM) is a maritime museum in Greenwich, London. It is part of Royal Museums Greenwich, a network of museums in the Maritime Greenwich World Heritage Site. Like other publicly funded national museums in the United Kingdom, it has no general admission charge; there are admission charges for most side-gallery temporary exhibitions, usually supplemented by many loaned works from other museums.

The museum was created by the National Maritime Museum Act 1934[2] under a Board of Trustees, appointed by HM Treasury. It is based on the generous donations of Sir James Caird (1864–1954). King George VI formally opened the museum on 27 April 1937 when his daughter Princess Elizabeth accompanied him for the journey along the Thames from London. The first Director was Sir Geoffrey Callender.[3]

Since the earliest times Greenwich has had associations with the sea and navigation. It was a landing place for the Romans,[4] Henry VIII lived here,[5] the Navy has roots on the waterfront,[6] and Charles II founded the Royal Observatory in 1675 for "finding the longitude of places".[7] The home of Greenwich Mean Time and the Prime Meridian since 1884, Greenwich has long been a centre for astronomical study, while navigators across the world have set their clocks according to its time of day. The Museum has the most important holdings in the world on the history of Britain at sea comprising more than two million items, including maritime art (both British and 17th-century Dutch), cartography, manuscripts including official public records, ship models and plans, scientific and navigational instruments, instruments for time-keeping and astronomy (based at the Observatory). Its holdings including paintings relating to Vice-Admiral Horatio Nelson and Captain James Cook.[8] 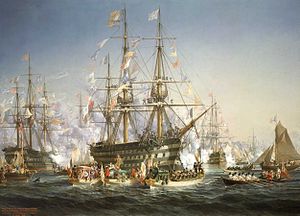 The Bretagne, painting by Jules Achille Noël, 1859, at the National Maritime Museum 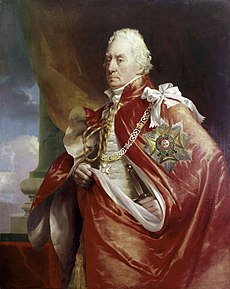 An active loans programme ensures that items from the collection are seen in the UK and abroad.[9]

The museum aims to achieve a greater understanding of British economic, cultural, social, political and maritime history and its consequences in the world today. The museum plays host to various exhibitions, including Ships Clocks & Stars in 2014, Samuel Pepys: Plague, Fire, Revolution in 2015 and Emma Hamilton: Seduction and Celebrity in 2016.[10][11][12]

The collection of the National Maritime Museum also includes items taken from the German Naval Academy Mürwik after World War II, including several ship models, paintings and flags. The museum has been criticized for possessing what has been described as "looted art".[13][14][15][16][17] The museum regards these cultural objects as "war trophies", removed under the provisions of the Potsdam Conference.[18]

The museum awards the Caird Medal annually in honour of its major donor, Sir James Caird.[19]

In late August 2018, several groups were vying for the right to purchase the 5,500 RMS Titanic relics that were an asset of the bankrupt Premier Exhibitions.[20] Eventually, the National Maritime Museum, Titanic Belfast and Titanic Foundation Limited, as well as National Museums Northern Ireland, joined together as a consortium that was raising money to purchase the 5,500 artifacts. The group intended to keep all of the items together as a single exhibit. The oceanographer Robert Ballard said that he favoured this bid as it would ensure that the memorabilia would be permanently displayed in Belfast (where the Titanic was built) and in Greenwich.[20] The museums were critical of the bid process set by the Bankruptcy Court in Jacksonville, Florida. The minimum bid for the auction on 11 October 2018 was set at US$21.5 million (£16.5m) and the consortium did not have enough funding to meet that amount.[21][22]

The museum was officially established in 1934 within the 200 acres (0.81 km2) of Greenwich Royal Park in the buildings formerly occupied by the Royal Hospital School, before it moved to Holbrook in Suffolk.

The gardens immediately to the north of the museum were reinstated in the late 1870s following construction of the cut-and-cover tunnel between Greenwich and Maze Hill stations. The tunnel comprised part of the final section of the London and Greenwich Railway and opened in 1878.[23]

A full redevelopment of the main galleries, centring on what is now the Neptune Court, which was designed by Rick Mather Architects and funded by the Heritage Lottery Fund, was completed in 1999.[24]

In 2008, the museum announced that the Israeli shipping magnate Sammy Ofer had donated £20m for a new gallery.[25]

Directors of the National Maritime Museum 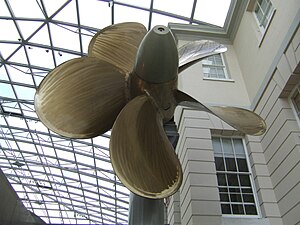 A Type 23 frigate propeller at the National Maritime Museum 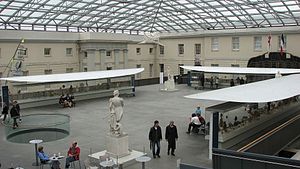