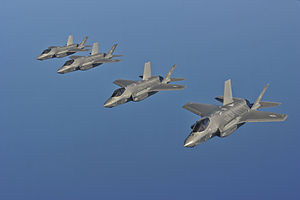 Multirole has also been applied to one aircraft with both major roles, a primary air-to-air combat role, and a secondary role like air-to-surface attack. However, those designed with an emphasis on aerial combat are usually regarded as air superiority fighters and usually deployed solely in that role, even though they are theoretically capable of ground attack. A good example is the F-14 Tomcat versus the F/A-18 Hornet; the F-14 was envisioned originally for air superiority and fleet interception defense with some variants later receiving secondary ground attack capability, while the F/A-18 was designed from the onset for air-to-surface strikes with a limited capacity to defend itself from other aircraft. In another instance, the Eurofighter Typhoon and Dassault Rafale are classified as multirole fighters; however the Typhoon is frequently considered an air superiority fighter due to its higher dogfighting prowess while its built-in strike capability has a lighter bomb load compared to contemporaries, compared to the more balanced Rafale which sacrifices air-to-air ability for a heavier payload.

Some aircraft[specify] are called swing-role, to emphasize the ability of a quick role change, either at short notice, or even within the same mission. According to the Military Dictionary : "the ability to employ a multi-role aircraft for multiple purposes during the same mission."[2]

According to BAE Systems, "an aircraft that can accomplish both air-to-air and air-to-surface roles on the same mission and swing between these roles instantly offers true flexibility. This reduces cost, increases effectiveness and enhances interoperability with allied air forces".[3]

The Panavia Tornado program was historically the first bearer of such a designation.

Although the term "multirole aircraft" may be relatively novel, certain airframes in history have proven versatile to multiple roles. In particular, the Junkers Ju 88 was renowned in Germany for being a "jack-of-all-trades", capable of performing as a bomber, dive bomber, night fighter, and so on, much as the British de Havilland Mosquito did as a fast bomber/strike aircraft, reconnaissance, and night fighter.

The US joint forces F-4 Phantom II built by McDonnell-Douglas also fits the definition of a multi-role aircraft in its various configurations of the basic airframe design. The various F-4 Phantom II configurations were used in air-to air, fighter bomber, reconnaissance, and suppression of enemy air defenses (SEAD) mission roles to name a few.

The first use of the term was by the multinational European project named Multi-Role Combat Aircraft, which was formed in 1968 to produce an aircraft capable of tactical strike, aerial reconnaissance, air defense, and maritime roles.[citation needed] The design was aimed to replace a multitude of different types in the cooperating air forces. The project produced the Panavia Tornado, which used the same basic design to undertake a variety of roles, the Tornado IDS (Interdictor/Strike) variant and later the Panavia Tornado ADV (Air Defence Variant). By contrast, the F-15 Eagle which was another fighter aircraft of that era was designed for air superiority and interception, with the mantra "not a pound for ground" (although the F-15C did have a rarely-used secondary ground attack capability), but that program eventually evolved into the F-15E Strike Eagle interdictor/strike derivative which retained the air-to-air combat lethality of earlier F-15s.

The newest fighter jet that fits the definition of 'multi-role' is the Lockheed Martin F-35 Lightning II/Joint Strike Fighter, designed to perform stealth-based ground/naval strike, fighter, reconnaissance and electronic warfare roles. Like a modern-day F-4, 3 variants of this aircraft fulfill the various strike and air defense roles among its joint service requirements: the standard variant is intended to eventually replace the F-16 and A-10 in the USAF and other Western air forces, a STOVL version intended to replace the Harrier in US Marine Corps, British Royal Air Force and Royal Navy service, and a carrier variant intended to eventually replace the older F/A-18C/D for the US Navy and other F-18 operators. The F-35's design goal can be compared to its larger and more air superiority-focused cousin, the F-22 Raptor.