Sun Princess is a Sun-class cruise ship built in 1995 and operated by Princess Cruises. At the time of her construction, she was one of the largest cruise ships in the world. She is the lead ship of her class that includes sister ships Sea Princess and the P&O ships Pacific Explorer and Oceana.[1]

Sun Princess was the ship on which the television show Love Boat: The Next Wave starring Robert Urich was filmed. She made the news in October, 2007 as the largest ship to ever cross beneath the Sydney Harbour Bridge while entering the harbor for the first time, with a vertical clearance of approximately 2.5 m (8 ft 2 in) to spare at low tide.[3] 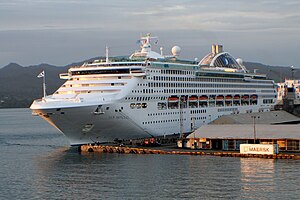 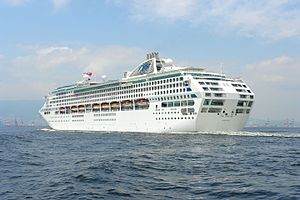 Sun Princess in the Port of Kobe, Japan

Since November 2007, Sun Princess has been seasonally based at Sydney, Australia. Cruises offered from that time circumnavigations Australia, circumnavigations New Zealand, and visits to New Caledonia and Vanuatu. In 2012, she offered her first world cruise.

In April 2008, Sun Princess was based in Australia, operating out of Sydney during the winter months, and from Melbourne during the summer months. For the 2008/2009 season the cruise program included Australian circumnavigations, Fremantle - Malacca Straits return, Melbourne - New Zealand / South Pacific. Sun Princess also sailed from Sydney for Melbourne plus Whitsundays return, a Japan return itinerary, and a 75 night Grand Pacific trip.

Demand for Sun Princess cruises between Sydney and Fremantle and beyond from April to June 2008 was so strong that Princess Cruises scheduled additional sailings for 2009. The company also decided to base the vessel in Fremantle from April to August that year. Despite the availability of cheap domestic air connections, many customers booking Sun Princess voyages between Sydney and Fremantle in 2009 opted instead to extend their trips by traveling across Australia on a connecting Indian Pacific rail service.[4]

Cruises on Sun Princess from Fremantle in 2009 included the first Indian Ocean voyage of its kind from Australia. A 46-night sailing from Fremantle visited Singapore, Malaysia, Thailand, India, the Maldives, the Seychelles, South Africa, Madagascar, Mauritius and Réunion.[4]

In 2013, Sun Princess sailed round-trip cruises from Tokyo, Japan marking the first of Princess Cruises deployments from there. In 2014, she sailed an extended Japan cruise program, sailing from Otaru, Hokkaido and Kobe. She was joined by Diamond Princess which replaced her Tokyo sailings.

In 2019-2020 cruise season, Sea Princess is intended to sail extended Western Australia program. The ship will be homeported in Freemantle, Australia for 141 days.[5]

In October 2013, a 73-year-old man disappeared from Sun Princess which was sailing a 16-day cruise from Fremantle, Western Australia to Sydney.[6] The man was reported missing by his wife. A search was conducted approximately 40 nautical miles (74 km; 46 mi) north of Cape Londonderry. NT News reported that the cruise ship was joined by patrol ship HMAS Maryborough, and three aircraft were involved in an aerial search. Although the weather was good, the missing passenger was not rescued nor his body located.[citation needed]

In November 2014, an 84-year-old elderly man fell overboard off the coast of Sydney. The ship was returning to White Bay in Sydney after a 13-day New Zealand cruise.[citation needed]

On 6 September 2017, a pipe burst onboard the Sun Princess causing flooding to the lower decks affecting passengers in their cabins.[7]

Template:List of ships built by Fincantieri