Lobengula Khumalo (1845–1894) was the second and last king of the Northern Ndebele people (historically called Matabele in English). Both names in the Ndebele language mean "the men of the long shields", a reference to the Ndebele warriors' use of the Zulu shield and spear.

The Matabele were descendants of a faction of the Zulu people who fled north during the reign of Shaka following the mfecane ("the crushing") or difaqane ("the scattering"). Shaka's general, Mzilikazi led his followers away from Zulu territory after a falling-out. In the late 1830s, they settled in what is now called Matabeleland in western Zimbabwe, but they claimed the sovereignty of a much wider area. The resulting kingdom was an Iron Age society in which the members of the tribe had a privileged position against outsiders whose lives were subject to the will of the king.

In return for their privileges, however, the Ndebele people both men and women had to submit to a strict discipline and status within the hierarchy. That set out their duties and responsibilities to the rest of society. Infringements of any social responsibility were punished with death, subject to the king's seldom-awarded reprieve. This tight discipline and loyalty were the secret of the Ndebele's success in dominating their neighbours.[3]

After the death of Mzilikazi, the first king of the Ndebele nation, in 1868, the izinduna, or chiefs, offered the crown to Lobengula, one of Mzilikazi's sons from an inferior wife. Several impis (regiments) disputed Lobengula's ascent, and the question was ultimately decided by the arbitration of the assegai, with Lobengula and his impis crushing the rebels. Lobengula's courage in the battle led to his unanimous selection as king.[who?]

The coronation of Lobengula took place at Mhlanhlandlela, one of the principal military towns. The Ndebele nation assembled in the form of a large semicircle, performed a war dance, and declared their willingness to fight and die for Lobengula. A great number of cattle were slaughtered, and the choicest meats were offered to Mlimo, the Ndebele spiritual leader, and to the dead Mzilikazi. Great quantities of millet beer were also consumed.

About 10,000 Matabele warriors in full war costume attended the crowning of Lobengula. Their costumes consisted of a headdress and short cape made of black ostrich feathers, a kilt made of leopard or other skins and ornamented with the tails of white cattle. Around their arms they wore similar tails and around their ankles they wore rings of brass and other metals. Their weapons consisted of one or more long spears for throwing and a short stabbing-spear or assegai (also the principal weapon of the Zulu people). For defence, they carried large oval shields of ox-hide, either black, white, red, or speckled according to the impi (regiment) they belonged to.

The Ndebele maintained their position due to the greater size and tight discipline in the army, to which every able-bodied man in the tribe owed service. "The Ndebele army, consisting of 15,000 men in 40 regiments [was] based around Lobengula's capital of Bulawayo."[4]

The chameleon and the fly: "Did you ever see a chameleon catch a fly? The chameleon gets behind the fly and remains motionless for some time, then he advances very slowly and gently, first putting forward one leg and then the other. At last, when well within reach, he darts his tongue and the fly disappears. England is the chameleon and I am that fly."
— Lobengula[5]

Lobengula was a big, powerful, man with a soft voice who was well loved by his people but loathed by foreign tribes. He had well over 20 wives, possibly many more; among them were Xwalile, daughter of king Mzila of the Gaza Empire, and Lozikeyi.[6] His father, Mzilikazi, had around 200 wives. It is said that he weighed about 19 stone (270 lb; 120 kg). By the time he was in his 40s, his diet of traditional millet beer and beef had caused him to be obese according to European visitors.

Lobengula was aware of the greater firepower of European guns so he mistrusted visitors and discouraged them by maintaining border patrols to monitor all travellers' movements south of Matabeleland. Early in his reign, he had few encounters with white men (although a Christian mission station had been set up at Inyati in 1859), but this changed when gold was discovered on the Witwatersrand within the boundaries of the South African Republic in 1886.

Lobengula had granted John Swinburne the right to search for gold and other minerals on a tract of land in the extreme southwest of Matabeleland along the Tati River between the Shashe and Ramaquabane rivers in about 1870, in what became known as the Tati Concession. However, it was not until about 1890 that any significant mining in the area commenced.[citation needed]

Lobengula had been tolerant of the white hunters who came to Matabeleland; he would even go so far as to punish those of his tribe who threatened the whites. But he was wary about negotiation with outsiders, and when a British team (Francis Thompson, Charles Rudd and Rochfort Maguire) came in 1888 to try to persuade him to grant them the right to dig for minerals in additional parts of his territory, the negotiations took many months.[citation needed] Lobengula gave his agreement to Cecil Rhodes only when his friend, Leander Starr Jameson, a qualified medical doctor, who had once treated Lobengula for gout, proposed to secure money and weaponry for the Matabele in addition to a pledge that any people who came to dig would be considered as living in his kingdom. As part of this agreement, and at the insistence of the British, neither the Boers nor the Portuguese would be permitted to settle or gain concessions in Matabeleland. Lobengula sent two emissaries to the British queen, Victoria. However, they were delayed by Alfred Beit's associates at the port. The 25-year Rudd Concession was signed by Lobengula on 30 October 1888.[citation needed] 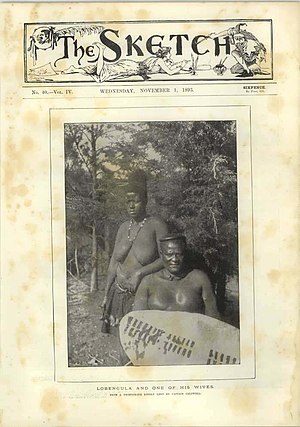 1893 King Lobengula and one of his Wives.

The First Matabele War began in October 1893, and the British South Africa Company's overwhelming military force led to devastating losses for the Ndebele warriors, notably at the Battle of the Shangani. As early as December 1893, it was reported that Lobengula had been very sick, but his death sometime in early 1894 was kept a secret for many months, and the cause of his death remains inconclusive.[7][8] By October 1897, the white colonists had successfully settled in much of the territory known later as Rhodesia, and Matabeleland was no more.[citation needed]