July is the seventh month of the year (between June and August) in the Julian and Gregorian Calendars and the fourth of seven months to have a length of 31 days. It was named by the Roman Senate in honour of Roman general Julius Caesar, it being the month of his birth. Prior to that, it was called Quintilis, being the fifth month of the 10-month calendar.

"Dog days" are considered to begin in early July in the Northern Hemisphere, when the hot sultry weather of summer usually starts. Spring lambs born in late winter or early spring are usually sold before 1 July.

July is the traditional period known as "fence month," the closed season for deer in England. The end of England's High Court of Justice Trinity Term takes place on 31 July. July is also the time in which the elections take place for the Japanese House of Councillors, held every three years and replacing half of its seats.

In Ancient Rome, the festival of Poplifugia was celebrated on 5 July, and Ludi Apollinares was held on 13 July and for several days afterwards. However, these dates do not correspond to the modern Gregorian calendar. 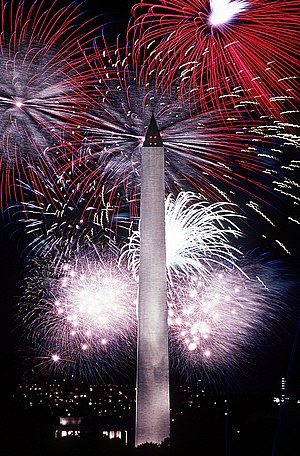 Fireworks in Washington, DC, to celebrate Independence Day on July 4

Canada Day is celebrated on July 1

5 July or following Monday if it's a weekend: July 6

Second to last Sunday in July and the following two weeks: July 19-August 1

Thursday before the first Monday: July 30