The Javanese calendar (Javanese: ꦥꦤꦁꦒꦭ꧀ꦭꦤ꧀ꦗꦮ, romanized: Pananggalan Jawa) is the calendar of the Javanese people. It is used concurrently with two other calendars, the Gregorian calendar and the Islamic calendar. The Gregorian calendar is the official calendar of the Republic of Indonesia and civil society, while the Islamic calendar is used by Muslims and the Indonesian government for religious worship and deciding relevant Islamic holidays.

The current system of the Javanese calendar was inaugurated by Sultan Agung of Mataram in the Gregorian year 1633 AD.[2] Prior to this, the Javanese had used the Hindu calendar (Saka), which begins in 78 CE and uses the solar cycle for calculating time.[3] Sultan Agung's calendar retained the Saka calendar year system of counting, but differs by using the same lunar year measurement system as the Islamic calendar, rather than the solar year. Occasionally, the Javanese calendar is referred to by its Latin name Anno Javanico or AJ (Javanese Year).[4]

The Javanese calendar contains multiple, overlapping (but separate) measurements of times, called "cycles". These include:

Days in the Javanese calendar, like the Islamic calendar, begin at sunset.[2] Traditionally, Javanese people do not divide the day and night into hours, but rather into phases.[4] The division of a day and night are:

The native Javanese system groups days into a five-day week called Pasaran, unlike most calendars that uses a seven-day week. The name, pasaran, is derived from the root word pasar ("market"). Historically, but also still today, Javanese villagers gather communally at local markets to socially meet, engage in commerce, and buy and sell farm produce, cooked foods, home industry crafted items and so on. John Crawfurd (1820) suggested that the length of the weekly cycle is related to the number of fingers on the hand,[5] and that itinerant merchants would rotate their visits to different villages according to a five-day "roster".

The days of the cycle each have two names, as the Javanese language has distinct vocabulary associated with two different registers of politeness: ngoko (informal) and krama (formal). The krama names for the days, second in the list, are much less common. 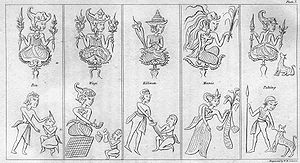 Signs of the Pasaran cycle

The origin of the names is unclear, and their etymology remains obscure. Possibly, the names may be derived from indigenous gods, like the European and Asian names for days of the week.[5] An ancient Javanese manuscript illustrates the week with five human figures (shown at right below the day names): a man seizing a suppliant by the hair, a woman holding a horn to receive an offering, a man pointing a drawn sword at another, a woman holding agricultural produce, and a man holding a spear leading a bull.[5]

Additionally, Javanese consider these days' names to have a mystical relation to colors and cardinal direction:

Most Markets no longer operate under this traditional Pasaran cycle, instead pragmatically remaining open every day of the Gregorian week. However many markets in Java still retain traditional names that indicated that once the markets only operated on certain Pasaran days, such as Pasar Legi, or Pasar Kliwon.[2] Some markets in small or medium size locations will be much busier on the Pasaran day than on the other days. On the market's name day itinerate sellers appear selling such things as livestock, plants and other products that are either less frequently purchased or are more expensive. This allows a smaller number of these merchants to service a much larger area much as in bygone days.

Javanese astrological belief dictates that an individual’s characteristics and destiny are attributable to the combination of the Pasaran day and the "common" weekday of the Islamic calendar on that person's birthday. Javanese people find great interest in the astrological interpretations of this combination, called the Wetonan cycle.

The seven-day-long week cycle (dina pitu, "seven days") is derived from the Islamic calendar, adopted following the spread of Islam throughout the Indonesian archipelago. The names of the days of the week in Javanese are derived from their Arabic counterparts, namely:

These two-week systems occur concurrently; thus, a certain Friday may fall on a Kliwon day, and is consequently called Jumat Kliwon.[2] This combination forms the Wetonan cycle.

From the example above, the Weton for Tuesday May 6, 2008 would be read as Selasa Wage.

The Wetonan cycle is especially important for divinatory systems, important celebrations, and rites of passage. Commemorations and events are held on days considered to be auspicious.

An especially prominent example, still widely taught in primary schools, is that the Weton for the Proclamation of Indonesian Independence on 17 August 1945 took place on Jumat Legi; this is also the Weton for the birth and death of Sultan Agung, one of the greatest kings of Java and the inventor of the modern Javanese calendar.[6] Therefore, Jumat Legi is considered an important night for pilgrimage.[7] There are also taboos that relate to the cycle; for example, the ritual dance bedhaya can only be performed on Kemis Kliwon.[8]

The coincidence of the Pasaran day with the common day on the day of birth is considered by Javanese to indicate the personal characteristics of that person, similar to the Western Zodiac and planetary positioning in Western astrology.[1]

For timekeeping, days are numbered within the lunar month (wulan) as is common in other calendar systems. The date indicates the change in the moon, and symbolizes the life of a human in the world. This process of revolving life is known as cakra manggilingan or heru cakra.

On the first day of the month, when the moon is small, it is compared to a newborn baby. The 14th day, called Purnama Sidhi (full moon), represents a married adult. The next day, called Purnama, occurs as the moon begins to wane. The 20th day, Panglong, symbolizes the point at which people begin to lose their memory. The 25th day, Sumurup, represents the point at which the adult requires care like when they were young. The 26th day, Manjing, represents the return of the human to his or her origin.[6]

The solar year is divided into twelve periods (mangsa) of unequal length. Its origin lies in agriculture practice in Java. The names of the first ten months are simply the ordinal numbers from 1 to 10 in Javanese language, although the names of the 11th and 12th months are unclear.[5] The cycle begins near the June solstice, around the middle of the dry season in Java.

In the 19th century, the solar month system or pranata mangsa was much better known among Javanese than the civil or religious year.[5] The cycle is clearly of Javanese origin, since the specific application to their climate does not match other territories in the Indonesian archipelago, as well as the usage of Javanese names for the months.[5] Although the cycle matches the weather pattern well, it is still clearly somewhat arbitrary, as can be seen in the lengths of the months.[5]

In astrology, the pranata mangsa is used to predict personality traits in a similar manner to sun signs in Western astrology. It is not widely used anymore for divination, but some practitioners use it as well as the other cycles in their divination.[1]

The Solar months are :

Each lunar year (taun) is divided into a series of twelve wulan/sasi or lunar months. Each consists of 29 or 30 days. This is adapted from the use of months in the Islamic calendar. The names of the month are given below in Javanese and Arabic which can be used interchangeably:

Length of the last month may be 29 or 30 days, depending on whether the year is normal or a leap year (taun kabisat).

The cycle of months is sometimes considered metaphorically to represent the cycle of human life. The first nine months represent gestation before birth, while the tenth month represents the human in the world, the eleventh the end of his or her existence, and the twelfth the return to where he or she came from. The cycle thus goes from one spark or conception (rijal) to another, traversing through the void (suwung).[6]

The Shalivahana era, which started in 78 CE and continues to be used on Bali, was used in Hindu times on Java, and for well over a century after the appearance of Islam on Java.

When Sultan Agung adopted the Islamic lunar calendar in 1633 CE, he did not adopt the Anno Hegirae to designate those years, but instead continued the count of the Shalivahana era, which was 1555 at the time.[5] As a result, the Anno Javanico does not in effect count from any time.

Eight tahun makes up a windu. A single windu lasts for 81 repetitions of the wetonan cycle, or 2,835 days (about 7 years 9 months in the Gregorian calendar). Note that the tahun are lunar years, and of shorter length than Gregorian years. The names of the years in the cycle of windu are as follows (in krama/ngoko):

The windu are then grouped into a cycle of four:

The cycles of wulan, tahun, and windu are derived from the Saka calendar.

Windu' are no longer used much in horoscopy, but there is evidence that it was previously used by court officials to predict trends. The passing of a windu is often seen as a milestone and deserving a slametan ritual feast.[1]

The kurup is a period of 120 tahun, or lunar years. There are thus 1440 lunar months, or 15 windu in a kurup. One day is dropped from the last month of Besar having 30 days, resulting in the last windu of the kurup having one less day than usual. Thus, the total number of days in a kurup is 42,524 (2,835 days in a windu x 15 windu - 1 day). This is the same number of days as in 120 lunar years of the Tabular Islamic Calendar.

Each kurup is named for date of the wetonan cycle on which the kurup commences. As this always falls in the Alip (first) year of the windu, it is prefixed with Alip. The current kurup started on Tuesday, March 24 of 1936 CE, which corresponds to Muharram 01 of 1355 AH in the Tabular Islamic Calendar, and will end on Sunday, August 25 of 2052 CE. As the wetonan date of that day was Selasa Pon, the kurup is named Alip Selasa Pon.