Japanese calendar types have included a range of official and unofficial systems. At present, Japan uses the Gregorian calendar together with year designations stating the year of the reign of the current Emperor.[1]

Japan has had more than one system for designating years.[3] including:

The official dating system known as nengō (年号) (or, strictly speaking, gengō (元号)), has been in use since the late 7th century. Years are numbered within regnal eras, which are named by the reigning Emperor. Beginning with Meiji (1868–1912), each reign has been one era, but many earlier Emperors decreed a new era upon any major event; the last pre-Meiji Emperor's reign (1846–1867) was split into seven eras, one of which lasted only one year. The nengō system remains in wide use, especially on official documents and government forms.[11]

The imperial year system (kōki) was used from 1872 to the Second World War. Imperial year 1 (Kōki 1) was the year when the legendary Emperor Jimmu founded Japan – 660 BC according to the Gregorian Calendar. Usage of kōki dating can be a nationalist signal, pointing out that the history of Japan's imperial family is longer than that of Christianity, the basis of the Anno Domini (AD) system. Kōki 2600 (1940) was a special year. The 1940 Summer Olympics and Tokyo Expo were planned as anniversary events, but were canceled due to the Second Sino-Japanese War. The Japanese naval Zero Fighter was named after this year. After the Second World War, the United States occupied Japan, and stopped the use of kōki by officials. Today, kōki is rarely used, except in some judicial contexts.

The present era, Reiwa, formally began on 1 May 2019. The name of the new era was announced by the Japanese government on 1 April 2019, a month prior to Naruhito's succession to the throne. The previous era, Heisei, came to an end on 30 April 2019, after Japan's former emperor, Akihito, abdicated the throne. 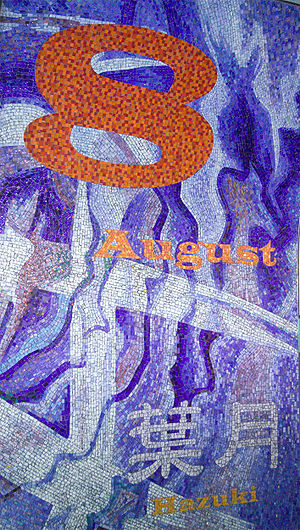 This mural on the wall of Shin-Ochanomizu subway station in Tokyo celebrates Hazuki, the eighth month.

The modern Japanese names for the months literally translate to "first month", "second month", and so on. The corresponding number is combined with the suffix 月 (-gatsu, "month"). The table below uses traditional numerals, but the use of Western numerals (１月, ２月, ３月 etc.) is common.

In addition, every month has a traditional name, still used by some in fields such as poetry; of the twelve, Shiwasu is still widely used today. The opening paragraph of a letter or the greeting in a speech might borrow one of these names to convey a sense of the season. Some, such as Yayoi and Satsuki, do double duty as given names (for women). These month names also appear from time to time on jidaigeki, contemporary television shows and movies set in the Edo period or earlier.

The old Japanese calendar was an adjusted lunar calendar based on the Chinese calendar, and the year—and with it the months—started anywhere from about 3 to 7 weeks later than the modern year, so in historical contexts it is not entirely accurate to equate the first month with January.

Subdivisions of the month

Sunday and Saturday are regarded as "Western style take-a-rest days". Since the late 19th century, Sunday has been regarded as a "full-time holiday", and Saturday a half-time holiday (半ドン). These holidays have no religious meaning (except those who believe in Christianity or Judaism). Many Japanese retailers do not close on Saturdays or Sundays, because many office workers and their families are expected to visit the shops during the weekend. An old Imperial Japanese Navy song (月月火水木金金) says "Mon Mon Tue Wed Thu Fri Fri!" which means "We work throughout the entire week."

These are frequently used to indicate approximate times, for example, "the temperatures are typical of the jōjun of April"; "a vote on a bill is expected during the gejun of this month."

Days of the month

Each day of the month has a semi-systematic name. The days generally use kun (native Japanese) numeral readings up to ten, and thereafter on (Chinese-derived) readings, but there are some irregularities. The table below shows dates written with traditional numerals, but use of Arabic numerals (１日, ２日, ３日, etc.) is extremely common in everyday communication, almost the norm.

Tsuitachi is a worn-down form of tsuki-tachi (月立ち), which means "the month beginning". The last day of the month was called tsugomori, which means "Moon hidden". This classical word comes from the tradition of the lunisolar calendar.

The 30th was also called misoka, just as the 20th is called hatsuka. Nowadays, the terms for the numbers 28–31 plus nichi are much more common. However, misoka is much used in contracts, etc., specifying that a payment should be made on or by the last day of the month, whatever the number is. New Year's Eve is known as Ōmisoka (大晦日, big 30th), and that term is still in use.

There is traditional belief that some days are lucky (kichijitsu) or unlucky. For example, there are some who will avoid beginning something on an unlucky day.[19]

After World War II, the names of Japanese national holidays were completely changed because of the secular state principle (Article 20, The Constitution of Japan). Although many of them actually originated from Shinto, Buddhism and important events relating to the Japanese imperial family, it is not easy to understand the original meanings from the superficial and vague official names.

† Traditional date on which according to legend Emperor Jimmu founded Japan in 660 BC.

Timeline of changes to national holidays

Gregorian months and the "One-Month Delay"

In contrast to other East Asian countries such as China, Vietnam, Korea and Mongolia, Japan has almost completely forgotten the Chinese calendar. Since 1876, January has been officially regarded as the "first month" even when setting the date of Japanese traditional folklore events (other months are the same: February as the second month, March as the third, and so on). But this system often brings a strong seasonal sense of gap since the event is 3 to 7 weeks earlier than in the traditional calendar. Modern Japanese culture has invented a kind of "compromised" way of setting dates for festivals called Tsuki-okure ("One-Month Delay") or Chūreki ("The Eclectic Calendar"). The festival is celebrated just one solar calendar month later than the date on the Gregorian calendar. For example, the Buddhist festival of Obon was the 15th day of the 7th month. Many places the religious services are held on July 15. However, in some areas, the rites are normally held on August 15, which is more seasonally close to the old calendar. (The general term "Obon holiday" always refers to the middle of August.) Although this is just de facto and customary, it is broadly used when setting the dates of many folklore events and religious festivals. But Japanese New Year is the great exception. The date of Japanese New Year is always January 1.

Some days have special names to mark the change in seasons. The 24 sekki (Hanyu Pinyin: Èrshísì Jiéqì; Japanese: 二十四節気; rōmaji: nijūshi sekki) are days that divide the solar year into twenty four equal sections. Zassetsu (雑節) is a collective term for the seasonal days other than the 24 sekki. 72 Kō (七十二候, Shichijūni kō) days are made from dividing the 24 sekki of a year further by three. These were named based upon the climate of Northern China, so many of the names do not fit in with the climate of Japanese archipelago. But some of these names, such as Shunbun, Risshū and Tōji, are still used quite frequently in everyday life in Japan.

Dates can vary by one day either way.

The following are known as the five seasonal festivals (節句 sekku, also 五節句 gosekku). The sekku were made official holidays during Edo period on Chinese lunisolar calendar. The dates of these festivals are confused nowadays; some on the Gregorian calendar, others on "Tsuki-okure".

The rokuyō (六曜) are a series of six days calculated from the date of Chinese calendar that supposedly predict whether there will be good or bad fortune during that day. The rokuyō are commonly found on Japanese calendars and are often used to plan weddings and funerals, though most people ignore them in ordinary life. The rokuyō are also known as the rokki (六輝). In order, they are:

The rokuyō days are easily calculated from the Japanese lunisolar calendar. The first day of the first month is always senshō, with the days following in the order given above until the end of the month. Thus, the 2nd day is tomobiki, the 3rd is senbu, and so on. The 1st day of the 2nd month restarts the sequence at tomobiki. The 3rd month restarts at senbu, and so on for each month. The latter six months repeat the patterns of the first six, so the 1st of the 7th is senshō, the 1st of the 12th is shakkō and the moon-viewing day on the 15th of the 8th is always butsumetsu.

This system did not become popular in Japan until the end of the Edo period.

The first day of April has broad significance in Japan. It marks the beginning of the government's fiscal year.[20] Many corporations follow suit. In addition, corporations often form or merge on that date. In recent years, municipalities have preferred it for mergers. On this date, many new employees begin their jobs, and it is the start of many real-estate leases. The school year begins on April 1.