listen); also known as Jan Mateyko; 24 June 1838[nb 1] – 1 November 1893) was a Polish painter known for paintings of notable historical Polish political and military events.[2][3] His works include large oil on canvas paintings like Rejtan (1866), Union of Lublin (1869) or Battle of Grunwald (1878), numerous portraits, a gallery of Polish kings, and murals in St. Mary's Basilica, Kraków. He is referred to as the most famous Polish painter or even the "national painter" of Poland.[2][3][4]

Matejko spent most of his life in Kraków. His teachers at the Kraków Academy of Fine Arts included Wojciech Korneli Stattler and Władysław Łuszczkiewicz. Later, he became a director at this institution, which eventually was renamed the Jan Matejko Academy of Fine Arts. A number of his students became prominent painters themselves, including Maurycy Gottlieb, Jacek Malczewski, Józef Mehoffer and Stanisław Wyspiański.[citation needed]

Matejko was born on 24 June 1838, in the Free City of Kraków.[2] His father, Franciszek Ksawery Matejko (Czech: František Xaver Matějka) (born 1789 or 13 January 1793, died 26 October 1860), a Czech from the village of Roudnice, was a graduate of the Hradec Králové school who later became a tutor and music teacher.[2] He first worked for the Wodzicki family in Kościelniki, Poland, then moved to Kraków, where he married the half-German, half-Polish Joanna Karolina Rossberg (Rozberg).[2] Jan was the ninth child of eleven children.[5] He grew up in a kamienica building on Floriańska Street.[6] After the death of his mother in 1845, Jan and his siblings were cared for by his maternal aunt, Anna Zamojska.[5]

Portrait of Matejko's father, Franciszek, and three of his children. An early work of Matejko from 1853

At a young age he witnessed the Kraków revolution of 1846 and the 1848 siege of Kraków by the Austrians, the two events which ended the existence of the Free City of Kraków.[2] His two older brothers served in these battles, under General Józef Bem; one died and the other was forced into exile.[2] Matejko attended St. Ann's High School, but he dropped out in 1851 because of poor grades.[7] From his earliest days Matejko showed artistic talent, but had great difficulty with other academic areas.[7] He never mastered a foreign language.[8] Despite that, and because of his exceptional skill, he studied at the School of Fine Arts in Kraków from 1852 to 1858.[2] His teachers included Wojciech Korneli Stattler and Władysław Łuszczkiewicz.[9] He selected historical painting as his specialization, and finished his first major work, Tsars Shuyski before Zygmunt III (Carowie Szujscy przed Zygmuntem III), in 1853 (he would return to this topic in a year before his death, in 1892[10]).[9][11] During this time, he began exhibiting historical paintings at the Kraków Society of Friends of Fine Arts (starting with 1855).[11] His seminal project for his graduation in 1858 was Sigismund I the Old ennobles the professors of the Jagiellonian University (Zygmunt I nadaje szlachectwo profesorom Uniwersytetu Jagiellońskiego).[12]

After graduation,[12] Matejko received a scholarship in 1859 to study with Hermann Anschütz at the Academy of Fine Arts, Munich.[11] The following year he received a scholarship to study at the Academy of Fine Arts Vienna as well, but after a few days and a major quarrel with Christian Ruben, Matejko returned to Kraków.[13] and opened a studio at his family home in Floriańska Street.[13] It would however be years before he would gain commercial success; for a time he was the proverbial "starving artist", who celebrated when he sold a canvas (the Tsars Shuyski...) for five gulden.[2]

In 1860 Matejko published an illustrated album, Clothing in Poland (Ubiory w Polsce), a project reflecting his intense interest in historical records of all kinds and his desire to promote such interest among Polish people, to intensify their patriotism.[13] His financial situation improved when he sold two paintings, Death of Wapowski during the crowning of Henry Valois (Zabicie Wapowskiego w czasie koronacji Henryka Walezego, 1861) and Jan Kochanowski mourning his daughter Urszulka (Jan Kochanowski nad zwłokami Urszulki, 1862), which settled his debts.[14] In 1862 he finished a painting, Stańczyk. Initially received without much applause, in time this would become known as one of Matejko's most famous masterpieces.[15] It marks a visible transition in Matejko's art style, from simply illustrating history to creating a philosophical and moral commentary of it.[13] 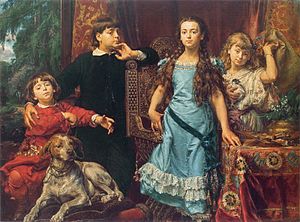 Portrait of the artist's four children. A late work of Matejko from 1879

During the January Uprising of 1863, in which he did not participate because of poor health, Matejko gave financial support, donating most of his savings to the cause, and personally transported arms to the insurgents' camp.[13] His Skarga's Sermon (Kazanie Skargi), finished in May 1864, was displayed in the gallery of the Kraków Society of Friends of Fine Arts, which gained him much publicity.[13] On 5 November that year, in recognition for his contributions to recreating historical themes, he became a member of the Kraków Scientific Society (Towarzystwo Naukowe Krakowskie).[16] Soon afterward, on 21 November, he married Teodora Giebultowska, with whom he would have five children: Beata, Helena, Tadeusz, Jerzy and Regina.[13] Helena, his daughter, also an artist, helped victims in World War I and was awarded the Cross of Independence by president Stanisław Wojciechowski.[17] 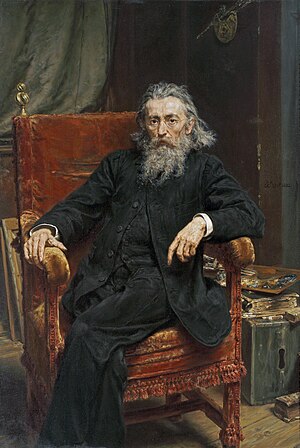 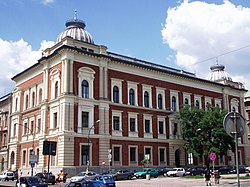 Kraków Academy of Fine Arts named after Matejko in 1979, where he served as president of many years

At that time Matejko started to gain international recognition. In 1865, Matejko's painting Skarga's Sermon was awarded a gold medal at the yearly Paris salon; soon afterwards Count Maurycy Potocki [pl] bought it for 10,000 guldens.[2] In 1867, his painting Rejtan was awarded a gold medal at the World Exhibition in Paris and acquired by Emperor Franz Joseph I of Austria for 50,000 franks.[18][19] His next major painting was the Union of Lublin (Unia Lubelska), created in the years 1867-1869. Once again applauded in Paris, it won Matejko a Cross of the French Légion d'honneur.[20] and was purchased by the Sejm of Galicia.[21] Union... was followed by Stefan Batory at Pskov (Stefan Batory pod Pskowem), finished in 1871.[20] In 1872 he visited Istanbul in the Ottoman Empire, and upon his return to Kraków finished Astronomer Copernicus, or Conversations with God (Astronom Kopernik, czyli rozmowa z Bogiem), which was acquired by the Jagiellonian University.[20] From the 1870s he was aided in many tasks by a secretary, Marian Gorzkowski, who would become his "right hand", his closest friend, a model for a number of paintings, and an author of memoirs about Matejko.[21][22]

In 1872 during an exhibition in Prague he was offered a directorship of the Academy of Fine Arts, Prague, and soon afterwards, a similar position at Kraków's School of Fine Arts.[20] He accepted the Kraków offer, and was for many years the principal (rector) of the Academy of Fine Arts.[20] In 1874 he finished Zawieszenie dzwonu Zygmunta (The Hanging of the Sigismund bell).[23] In 1878 he finished another masterpiece, Battle of Grunwald.[21] That year he received an "honorary grand gold" medal in Paris, and the city council of Kraków presented him with a ceremonial scepter, a symbol of his "royal status in fine arts".[21] In 1879 he finished Rok 1863 - Polonia (Year 1863 - Polonia), his take on the January Uprising of that time. Begun in 1864, a year after the Uprising he himself had lived through and where he lost a number of friends and family members, this canvas languished unfinished until prince Władysław Czartoryski became interested in acquiring it; it is still considered unfinished.[13][24][25]

Years 1880-1882 marked his work on another large painting, Prussian Tribute (Hołd Pruski).[21] Matejko gifted this painting to "the Polish nation", and it earned him honorary citizenship of Kraków; one of the squares in the city was also named Matejko Square.[21] In 1883 he finished Sobieski at Vienna (Jan Sobieski pod Wiedniem).[11][21] Sobieski... was gifted to Pope Leo XIII as a "gift of the Polish nation" and Matejko, who was one of the members of the group delivering it, received a Knight Commander with Star Order of Pius IX.[26] The painting is exhibited in the Sobieski Room of the Vatican Museums.[27]At that time he also became a vocal spokesman in a number of political issues, publishing letters on issues such as Polish-Russian relations.[26] Another arena he was very engaged in were efforts to protect and reconstruct various historical monuments in the city of Kraków.[28] In 1886, he finished a painting about French rather than about Polish history: Virgin of Orléans, portraying Joan of Arc.[26][29]

Next year Matejko received a Doctor of Philosophy degree, honoris causa, from the Jagiellonian University, and the Austrian Litteris et Artibus.[26] In 1888 he finished Battle of Racławice (Bitwa pod Racławicami).[26] In 1888-1899, to justify his new academic title, he published a cycle of twelve sketches with an accompanying commentary, History of civilization in Poland (Dzieje Cywilizacji w Polsce).[23][26] From 1890 to 1892 he published another cycle of sketches, this time of Polish kings (Poczet królów i książąt polskich - Fellowship of the kings and princes of Poland), which over the years became so popular that its portraits are seen as the canon portrayals of their subjects.[26][30] 1891 saw him finishing Constitution of the 3 May (Konstytucja 3 Maja).[26] He then began composing another large painting, Oaths of Jan Kazimierz (Śluby Jana Kazimierza), but it remained unfinished due to his death.[26] In 1892, a year before his death, he finished a Self-portrait (Autoportret).[26]

Matejko suffered from a peptic ulcer, and died in Kraków on 1 November that year of internal bleeding.[28] His funeral on 5 November drew large crowds, and his death was mentioned in at least thirty two European newspapers.[31] He was buried in the Kraków's Rakowicki Cemetery.[28] 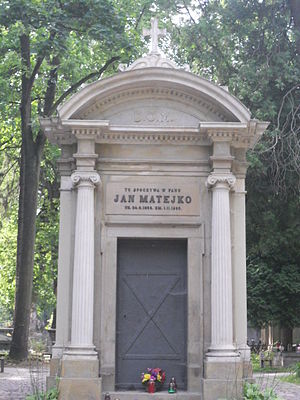 He is counted among the most famous Polish painters,[2][3] described as "Poland's greatest historical painter"[4] and "a cult figure to the nation at large... [already] by the time of his death.".[23] His style was praised for being "colourful, detailed and imaginative".[23] He succeeded in propagating Polish history, and reminding the world about Poland, while his country remained partitioned and without any independent political representation.[2] His works, disseminated in thousands of reproductions, have become almost standard illustrations of many key events in Polish history.[2][3] His 1860 illustrated album Ubiory w Polsce (Clothing in Poland) is seen as a valuable historical reference.[32] Critics of his work have pointed to his use of traditional painting style ("antiquarian realism", "theatrical effects").[33] At exhibitions abroad, the nuanced historical context of his works often was lost on foreign audiences.[11][23] Occasionally his paintings would cause controversy; for example, Rejtan offended a number of prominent members of Polish nobility, who saw the painting as an indictment of their entire social class.[20][23] His paintings were subject to censorship in the Russian Empire; and Nazi Germany planned to destroy Battle of Grunwald and Prussian Homage, which Nazi authorities considered offensive to the German view of history (those paintings were among many that the Germans planned to destroy in their war on Polish culture, but the Polish resistance successfully hid both).[34]

Many of his works are dedicated to famous events in Polish history. Matejko was focusing on major themes in Polish history and using historical sources to paint events in minute historical detail.[35] His earliest paintings are simple historical paintings with no hidden messages.[13] The later ones, starting with the painting Stańczyk (1862), are intended to inspire the viewers with a patriotic message.[13][36] Stańczyk focuses on the court jester, portrayed as a symbol of country's conscience, sitting in a chair in the background of a party - a sole figure reflecting on the war, ignored by the joyful crowd.[23]

In addition to history paintings Matejko made also numerous portraits.[26] Among others: portraits of Jagiellonian University rectors Józef Szujski and Stanisław Tarnowski, and numerous portraits of family and friends, including Wife in the wedding dress ("Żona w sukni ślubnej") (1865, destroyed by his wife during a quarrel and recreated in 1879) and a self-portrait (1892).[26] Altogether Matejko authored 320 oil paintings and several thousands drawings and watercolors.[citation needed] He also designed the polychrome in St. Mary's Basilica, Kraków (1889–1891).[37]

Over 80 painters have been Matejko's students at some point, many influenced during his tenure as the director of the Kraków School of Fine Arts, and are referred to as members of "Matejko School".[23][40] Prominent among them are Maurycy Gottlieb,[40] Ephraim Moses Lilien,[41] Jacek Malczewski,[40] Józef Mehoffer,[40] Antoni Piotrowski,[40] Witold Pruszkowski,[40] Leon Wyczółkowski,[40] and Stanisław Wyspiański.[40]

The following is a selected list of Matejko's works, in chronological order.