Jahanara Begum (Persian: جہان آرا بیگم‎; 23 March 1614 – 16 September 1681) was a Mughal princess and the Padshah Begum of the Mughal Empire from 1631 to 1681. She was the eldest child of Emperor Shah Jahan and his wife, Mumtaz Mahal.[2] Often referred to simply as Begum Sahib (Princess of Princesses), she was the elder sister of the crown prince, Dara Shikoh, and Emperor Aurangzeb.[3]

After Mumtaz Mahal's untimely death in 1631, the 17-year-old Jahanara took her mother's place as First Lady (Padshah Begum) of the Mughal Empire, despite the fact that her father had three other wives. She was Shah Jahan's favourite daughter, wielded major political influence during her father's reign, and has been described as "the most powerful woman in the empire" at the time.[4]

Jahanara was an ardent partisan of her brother, Dara Shikoh, and supported him as her father's chosen successor. During the war of succession which took place after Shah Jahan's illness in 1657, Jahanara sided with the heir-apparent Dara and ultimately joined her father in Agra Fort, where he had been placed under house arrest by Aurangzeb. A devoted daughter, she took care of Shah Jahan till his death in 1666. Later, Jahanara reconciled with Aurangzeb who gave her the title Empress of Princesses and replaced her younger sister, Princess Roshanara Begum, as the First Lady.[5] Jahanara died unmarried during Aurangzeb's reign.

Jahanara's early education was entrusted to Sati al-Nisa Khanam, the sister to Jahangir's poet laureate, Talib Amuli. Sati al-Nisa Khanam was known for her knowledge of the Qur'an and Persian literature, as well as for her knowledge of etiquette, housekeeping, and medicine. She also served as principal lady-in-waiting to her mother, Mumtaz Mahal.[6]

Many of the women in the imperial household were accomplished at reading, writing poetry and painting. They also played chess, polo and hunted outdoors. The women had access to the late Emperor Akbar's library, full of books on world religions, and Persian, Turkish and Indian literature.[7] Jahanara was no exception.

Upon the death of Mumtaz Mahal in 1631, Jahanara, aged 17, took the place of her mother as First Lady of the Empire, despite her father having three other wives.[8] In addition to caring for her younger brothers and sisters, she is also credited with bringing her father out of mourning and restoring normality to the Court, darkened by her mother's death and her father's grief.

One of her tasks after the death of her mother was to oversee, with the help of Sati al-Nisa Khanam, the betrothal and wedding of her brother, Dara Shikoh to Begum Nadira Banu, which was originally planned by Mumtaz Mahal, but postponed by her death.

Her father frequently took her advice and entrusted her with the charge of the Imperial Seal. In 1644, when Aurangzeb angered his father, the Badshah, Jahanara interceded on her brother’s behalf and convinced Shah Jahan to pardon him and restore his rank.[9] Shah Jahan's fondness for his daughter was reflected in the multiple titles that he bestowed upon her, which included: Sahibat al-Zamani (Lady of the Age), Padishah Begum (Lady Emperor), and Begum Sahib (Princess of Princesses). Her power was such that, unlike the other imperial princesses, she was allowed to live in her own palace, outside the confines of the Agra Fort.[10] This elavation and closeness later led to a "bazaar rumour" that there were incestuous relations between Jahanara and her father. As related by François Bernier, a French physician at the Mughal court, "it would have been unjust to deny the King the privilege of gathering fruit from the tree he himself had planted."[11]

In March 1644,[12] just days after her thirtieth birthday, Jahanara suffered serious burns on her body and almost died of her injuries. Shah Jahan ordered that vast sums of alms be given to the poor, prisoners be released, and prayers offered for the recovery of the princess. Aurangzeb, Murad, and Shaista Khan returned to Delhi to see her.[13][14] Accounts differ as to what happened. Some say Jahanara's garments, doused in fragrant perfume oils, caught fire.[14] Others accounts assert that the princess' favorite dancing-woman's dress caught fire and the princess, coming to her aid, burnt herself on the chest.[15]

During her illness, Shah Jahan was so concerned about the welfare of his favourite daughter, that he made only brief appearances at his daily durbar in the Diwan-i-Am.[16] Royal physicians failed to heal Jahanara's burns. A Persian doctor came to treat her, and her condition improved for a number of months, but then, there was no further improvement until a royal page named Arif Chela mixed an ointment that, after two more months, finally caused the wounds to close. A year after the accident, Jahanara fully recovered.[17]

After the accident, the princess went on a pilgrimage to Moinuddin Chishti’s shrine in Ajmer.

After her recovery, Shah Jahan gave Jahanara rare gems and jewellery, and bestowed upon her the revenues of the port of Surat.[10] She later visited Ajmer, following the example set by her great-grandfather Akbar.[18]

Jahanara was very wealthy. In honor of his coronation, on 6 February 1628,[19] Shah Jahan awarded his wife, Mumtaz Mahal, Jahanara's mother, 100,000 ashrafis (Persian gold coins worth two Mohurs), 600,000 rupees and an annual privy purse of one million rupees. Jahanara received 100,000 ashrafis, 400,000 rupees and an annual grant of 600,000.[20][21] Upon Mumtaz Mahal's death, her personal fortune was divided by Shah Jahan between Jahanara Begum (who received half) and the rest of Mumtaz Mahal's surviving children.[22]

Jahanara was allotted income from a number of villages and owned several gardens including, Bagh-i-Jahanara, Bagh-i-Nur and Bagh-i-Safa.[23] "Her jagir included the villages of Achchol, Farjahara and the Sarkars of Bachchol, Safapur and Doharah. The pargana of Panipat was also granted to her."[24] As mentioned above, she was also given the prosperous city of Surat.

Jahangir's mother owned a ship, which traded between Surat and the Red Sea. Nur Jahan continued with a similar business, trading in indigo and cloth. Later, Jahanara continued the tradition.[25] She owned a number of ships, and maintained trade relations with the English and the Dutch.[26]

Jahanara was known for her active participation in looking after the poor and financing the building of mosques.[27] When her ship, the Sahibi was to set sail for its first journey (on 29 October 1643), she ordered that the ship make its voyage to Mecca and Medina and, "... that every year, fifty koni (One Koni was 4 Muns or 151 pounds) of rice should be sent by the ship for distribution among the destitute and needy of Mecca."[28]

As the de facto Primary Queen of the Mughal empire, Jahanara was responsible for charitable donations. She organized almsgiving on important state and religious days, supported famine relief and pilgrimages to Mecca.[29]

Jahanara made important financial contributions in the support of learning and arts. She supported the publication of a series of works on Islamic mysticism, including commentaries on Rumi's Mathnawi, a very popular mystical work among in Mughal India.[30]

Along with her brother Dara Shikoh, she was a disciple of Mullah Shah Badakhshi, who initiated her into the Qadiriyya Sufi order in 1641. Jahanara Begum made such progress on the Sufi path that Mullah Shah would have named her his successor in the Qadiriyya, but the rules of the order did not allow this.[18]

She wrote a biography of Moinuddin Chishti, the founder of the Chishtiyah order in India, titled Mu’nis al-Arwāḥ, as well as a biography of Mullah Shah, titled Risālah-i Ṣāḥibīyah, in which she also described her initiation by him.[31] Her biography of Moinuddin Chishti is highly regarded for its judgment and literary quality. In it, she regarded him as having initiated her spiritually four centuries after his death, described her pilgrimage to Ajmer, and spoke of herself as a faqīrah to signify her vocation as a Sufi woman.[32]

Jahanara Begum stated that she and her brother Dārā were the only descendants of Timur to embrace Sufism.[33] However, Aurangzeb was spiritually trained as a follower of Sufism as well. As a patron of Sufi literature, she commissioned translations of and commentaries on many works of classical literature.[34]

The Passing of Shah Jahan beside his daughter and caretaker Princess Jahanara. Painting by Abanindranath Tagore, 1902

During the war of succession, Jahanara supported her brother Dara Shikoh, the eldest son of Shah Jahan. When Dara Shikoh's generals sustained a defeat at Dharmat (1658) at the hands of Aurangzeb, Jahanara wrote a letter to Aurangzeb and advised him not to disobey his father and fight with his brother. She was unsuccessful. Dara was badly defeated in the Battle of Samugarh (29 May 1658), and fled towards Delhi.[36]

Shah Jahan did everything he could, to stop the planned invasion of Agra. He asked Jahanara to use her feminine diplomacy to convince Murad and Shuja not to throw their weight on the side of Aurangzeb.[37]

In June 1658, Aurangzeb besieged his father Shah Jahan in the Agra Fort, forcing him to surrender unconditionally, by cutting off the water supply. Jahanara came to Aurangzeb on 10 June, proposing a partition of the empire. Dara Shikoh would be given the Punjab and adjoining territories, Shuja would get Bengal, Murad would get Gujarat, Aurangzeb’s son Sultan Muhammad would get the Deccan, and the rest of the empire would go to Aurangzeb. Aurangzeb refused Jahanara’s proposition on the grounds that Dara Shikoh was an infidel.[38]

On Aurangzeb's ascent to the throne, Jahanara joined her father in imprisonment at the Agra Fort, where she devoted herself to his care till his death in 1666.[39][40]

After the death of their father, Jahanara and Aurangzeb reconciled. He gave her the title, Empress of Princesses, and she replaced Roshanara as the First Lady.[41]

Jahanara was soon secure enough in her position to occasionally argue with Aurangzeb and have certain special privileges which other women did not possess. She argued against Aurangzeb's strict regulation of public life in accordance with his conservative religious beliefs and his decision in 1679 to restore the poll tax on non-Muslims, which she believed would alienate his Hindu subjects.[42] 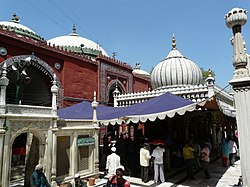 Jahanara had her tomb built during her lifetime. It is constructed entirely of white marble with a screen of trellis work, open to the sky.[43]

Upon her death, Aurangzeb gave her the posthumous title, Sahibat-uz-Zamani (Mistress of the Age).[44] Jahanara is buried in a tomb in the Nizamuddin Dargah complex in New Delhi, which is considered "remarkable for its simplicity". The inscription on the tomb reads as follows:

بغیر سبزہ نہ پو شد کسے مزار مرا کہ قبر پوش غریباں ہمیں گیاہ و بس است
Allah is the Living, the Sustaining.
Let no one cover my grave except with greenery,
For this very grass suffices as a tomb cover for the poor.
The mortal simplistic Princess Jahanara,
Disciple of the Khwaja Moin-ud-Din Chishti,
Daughter of Shah Jahan the Conqueror
May Allah illuminate his proof.
1092 [1681 AD]

In Agra, she is best known for sponsoring the building of the Jami Masjid or Friday Mosque in 1648, in the heart of the old city.[45] The Mosque was funded entirely by Jahanara, using her personal allowance.[46] She founded a madrasa, which was attached to the Jama Masjid, for the promotion of education.[47]

She constructed an elegant caravanserai on the East side of the street with gardens in the back. Herbert Charles Fanshawe, in 1902, mentions about the serai:

"Proceeding up the Chandni Chowk and passing many shops of the principal dealers in jewels, embroideries, and other products of Delhi handicrafts, the Northbrook Clock Tower and the principal entrance to the Queen's Gardens are reached. The former is situated at the site of the Karavan Sarai of the Princess Jahanara Begum (p. 239), known by the title of Shah Begum. The Sarai, the square in front of which projected across the street, was considered by Bernier one of the finest buildings in Delhi, and was compared by him with the Palais Royal, because of its arcades below and rooms with a gallery in front above." [48]

The serai was later replaced by [49] a building, now known as the Town Hall, and the pool in the middle of the square was replaced by a grand clock tower (Ghantaghar).