Jack Frost is a personification of frost, ice, snow, sleet, winter, and freezing cold. He is a variant of Old Man Winter who is held responsible for frosty weather, nipping the fingers and toes in such weather, coloring the foliage in autumn, and leaving fern-like patterns on cold windows in winter.

Starting in late 19th century literature, more developed characterizations of Jack Frost depict him as a sprite-like character, sometimes appearing as a sinister mischief-maker or as a hero. 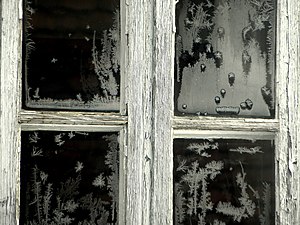 Frost on a window

Jack Frost is traditionally said to leave the frosty, fern-like patterns on windows on cold winter mornings (window frost or fern frost) and nipping the extremities in cold weather. Over time, window frost has become far less prevalent in the modern world due to the advance of double-glazing, but Jack Frost remains a well-known figure in popular culture. He is sometimes described or depicted with paint brush and bucket coloring the autumnal foliage red, yellow, brown, and orange.[1]

Tales of Jack Frost may originate from Anglo-Saxon and Norse winter customs. Jack has an entire chapter named after him in Kalevala, the Finnish national epic compiled from their ancient oral tradition.

There are various other mythological beings who take on a similar role yet have a unique folklore to them. In Russia, he has taken on a different form as Grandfather Frost, and in Germany there is instead a different entity altogether known as Mrs. Holle. The Hindu Kush mountain range is named after stories of a resident giant who would to kill (kesh) those who attempted to pass, and has been compared to England's Jack Frost.[2][3]

The earliest reference to Jack Frost in literature[4] is in the book 'Round About Our Coal Fire, or Christmas Entertainments' published in 1734.[5]

Jack Frost is mentioned in many movies. for example, in the wintertime song "The Christmas Song" (aka "Chestnuts Roasting on an Open Fire"). He has been presented as a villain in some media and a hero in others.

Jack Frost has appeared in many video games including: