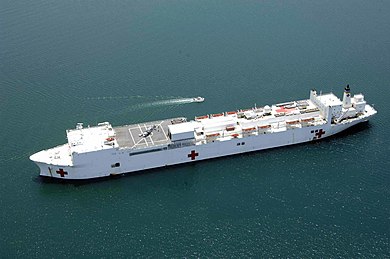 A hospital ship is a ship designated for primary function as a floating medical treatment facility or hospital. Most are operated by the military forces (mostly navies) of various countries, as they are intended to be used in or near war zones.[1] In the 19th century, redundant warships were used as moored hospitals for seamen.

The Second Geneva Convention prohibits military attacks on hospital ships, though belligerent forces do have rights of inspection and may take injured enemy patients as prisoners of war.[2][3] 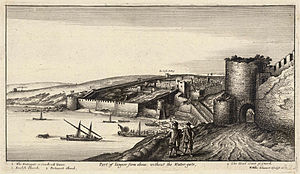 Tangier circa 1670. Hospital ships were used during the evacuation of the port in the 1680s.

The earliest British hospital ship may have been the vessel Goodwill, which accompanied a Royal Navy squadron in the Mediterranean in 1608 and was used to house the sick sent aboard from other ships.[7] However this experiment in medical care was short-lived, with Goodwill assigned to other tasks within a year and her complement of convalescents simply left behind at the nearest port.[8] It was not until the mid-seventeenth century that any Royal Navy vessels were formally designated as hospital ships, and then only two throughout the fleet. These were either hired merchant ships or elderly sixth rates, with the internal bulkheads removed to create more room, and additional ports cut through the deck and hull to increase internal ventilation.[7]

In addition to their sailing crew, these seventeenth century hospital ships were staffed by a surgeon and four surgeon's mates. The standard issue of medical supplies was bandages, soap, needles and bedpans. Patients were offered a bed or rug to rest upon, and given a clean pair of sheets. These early hospital ships were for the care of the sick rather than the wounded, with patients quartered according to their symptoms and infectious cases quarantined from the general population behind a sheet of canvas. The quality of food was very poor. In the 1690s the surgeon aboard Siam complained that the meat was in an advanced state of putrefaction, the biscuits were weevil-ridden and bitter, and the bread was so hard that it stripped the skin off patient's mouths.[7]

Hospital ships were also used for the treatment of wounded soldiers fighting on land. An early example of this was during an English operation to evacuate English Tangier in 1683. An account of this evacuation was written by Samuel Pepys, an eyewitness. One of the main concerns was the evacuation of sick soldiers "and the many families and their effects to be brought off". The hospital ships Unity and Welcome sailed for England on 18 October 1683 with 114 invalid soldiers and 104 women and children, arriving at The Downs on 14 December 1683.[9]

The number of medical personnel aboard Royal Navy hospital ships was slowly increased, with regulations issued in 1703 requiring that each vessel also carry six landsmen to act surgical assistants, and four washerwomen. A 1705 amendment provided for a further five male nurses, and requisitions from the era suggest the number of sheets per patient was increased from one to two pairs.[7] On 8 December 1798, unfit for service as a warship, HMS Victory was ordered to be converted to a hospital ship to hold wounded French and Spanish prisoners of war. According to Edward Hasted in 1798, two large hospital ships (also called lazarettos), (which were the surviving hulks of forty-four gun ships) were moored in Halstow Creek in Kent. The creek is an inlet from the River Medway and the River Thames. The crew of these vessels watched over ships coming to England, which were forced to stay in the creek under quarantine to protect the country from infectious diseases including the plague.[10]

From 1821 to 1870 the Seamen's Hospital Society provided HMS Grampus, HMS Dreadnought and HMS Caledonia (later renamed Dreadnought) as successive hospital ships moored at Deptford in London.[11] In 1866 HMS Hamadryad was moored in Cardiff as a seamen's hospital, replaced in 1905 by the Royal Hamadryad Seamen's Hospital.[12] Other redundant warships were used as hospitals for convicts and prisoners of war.

The institutionalization of the use of hospital ships by the Royal Navy occurred during the first half of the nineteenth century. By the standard of the medical provision available at the time for convalescent soldiers, hospital ships were generally superior in their standard of service and sanitation. It was during the Crimean War in the 1850s that the modern hospital ship began to emerge. The only military hospital available to the British forces fighting on the Crimean Peninsula was at Scutari near the Bosphorus. Over the course of the Siege of Sevastopol, almost 15,000 wounded troops were transported there from the port at Balaklava by a squadron of converted hospital ships.[9]

The first ships to be equipped with genuine medical facilities were the steamships HMS Melbourne and HMS Mauritius. These hospitals were manned by the Medical Staff Corps and provided services to the British expedition to China in 1860. The ships provided relatively spacious accommodation for the patients and were equipped with an operating theatre. Another early example of a hospital ship was USS Red Rover in the 1860s, which aided the wounded soldiers of both sides during the American Civil War.[9]

During the Russo-Turkish War (1877–78), the British Red Cross supplied a steel-hulled ship, equipped with modern surgery equipment including chloroform and other anaesthetics and carbolic acid for antisepsis. Similar vessels accompanied the 1882 invasion of Egypt and aided American personnel during the Spanish–American War.[9]

Hospital ships were used by both sides in the Russo-Japanese War (1904–05). It was the sighting by the Japanese of the Russian hospital ship Orel, correctly illuminated in accordance with regulations, that led to the decisive naval Battle of Tsushima. Orel was retained as a prize of war by the Japanese after the battle. 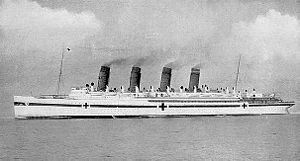 During World War I and World War II, hospital ships were first used on a massive scale. Many passenger liners were converted for use as hospital ships. RMS Aquitania and HMHS Britannic were two famous examples of ships serving in this capacity. By the end of the First World War, The British Royal Navy had 77 such ships in service. During the Gallipoli Campaign, hospital ships were used to evacuate over 100,000 wounded personnel to Egypt.

HMHS Aquitania in World War I service as a hospital ship.

The first purposely built hospital ship in the U.S. Navy was USS Relief[14] which was commissioned in 1921. During World War II both the United States Navy and Army operated hospital ships though with different purposes.[15] Naval hospital ships were fully equipped hospitals designed to receive casualties direct from the battlefield and also supplied to provide logistical support to front line medical teams ashore.[15] Army hospital ships were essentially hospital transports intended and equipped to evacuate patients from forward area Army hospitals to rear area hospitals or from those to the United States and were not equipped or staffed to handle large numbers of direct battle casualties.[15] Three of the Navy hospital ships, USS Comfort, USS Hope, and USS Mercy, were less elaborately equipped than other Navy hospital ships, medically staffed by Army medical personnel and similar in purpose to the Army model.[15] 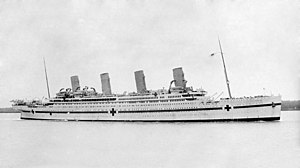 Britannic (youngest sister of Titanic and Olympic) after conversion to a hospital ship during World War I.

The last British royal yacht, the post World War II HMY Britannia, was ostensibly constructed in a way as to be easily convertible to a hospital ship in wartime. After her decommissioning, Peter Hennessy discovered that this was a cover story: her actual role would have been as Queen Elizabeth II's refuge from nuclear weapons, hiding amidst the lochs (fjords) of western Scotland.[16]

A development of the Lun-class ekranoplan was planned for use as a mobile field hospital for rapid deployment to any ocean or coastal location at a speed of 297 knots (550 km/h, 341.8 mph). Work was 90% complete on this model, Spasatel, but Soviet military funding ceased and it was never completed.

Some hospital ships, such as SS Hope and Esperanza del Mar, belong to civilian agencies, and as such are not part of any navy. Mercy Ships, an international charity, do not belong to any government. 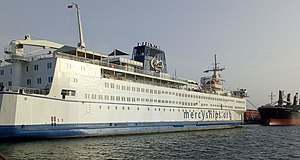 According to the San Remo Manual on International Law Applicable to Armed Conflicts at Sea, a hospital ship violating legal restrictions must be duly warned and given a reasonable time limit to comply. If a hospital ship persists in violating restrictions, a belligerent is legally entitled to capture it or take other means to enforce compliance. A non-complying hospital ship may only be fired on under the following conditions:

In all other circumstances, attacking a hospital ship is a war crime.

Modern hospital ships display large Red Crosses or Red Crescents to signify their Geneva Convention protection under the laws of war. Even so, marked vessels have not been completely free from attack. Notable examples of hospital ships deliberately attacked during wartime are HMHS Llandovery Castle in 1915, the Soviet hospital ship Armenia in 1941, and AHS Centaur in 1943.

It is common for naval ships, especially large ships such as aircraft carriers and amphibious assault ships to have on-board hospitals. However, they are only one small part of the vessel's overall capability, and are used primarily for the ship's crew and its amphibious forces (and occasionally for relief missions). They do not qualify as "hospital ships", as they are not marked and designated as such, and as armed vessels they are disqualified from protection as a hospital ship under international law.[23] Examples of these ships from various navies include;

Several classes of US Navy ships are equipped with on-board hospitals;

This article incorporates text from the public domain Dictionary of American Naval Fighting Ships. The entry can be found here.