From Encyclopedia Britannia
Jump to navigation Jump to search
For other ships with the same name, see HMS Vernon.

HMS Vernon was a shore establishment or "stone frigate" of the Royal Navy in Portsmouth. Vernon was established on 26 April 1876 as the Royal Navy's Torpedo Branch also known as the Torpedo School, named after the ship HMS Vernon which served as part of its floating base. After the First World War, HMS Vernon moved ashore, taking over the Gunwharf site, where it continued to operate until 1 April 1996, when the various elements comprising the establishment were split up and moved to different commands.

The second ship to be called HMS Vernon ended her career laid up in Chatham Dockyard as a floating coaling jetty.[1] In 1872 she was moved to become a tender to HMS Excellent for torpedo and mining training. In 1874 she was joined by HMS Vesuvius, an iron screw torpedo vessel. Vesuvius was attached as an Experimental Tender for the conduct of torpedo trials, and remained in the role until 1923.[1]

On 26 April 1876 Vernon was joined by the former steam frigate HMS Ariadne and the lighter Florence Nightingale. These were then commissioned as HMS Vernon, and became the home of the Royal Navy's Torpedo Branch, independent of HMS Excellent.[2] Ariadne was used to provide accommodation. In January 1886 HMS Donegal replaced the original Vernon as a more spacious torpedo school ship. Donegal was renamed Vernon, the original Vernon was renamed Actaeon and took over as the practical workshop.[1]

On 23 April 1895 the hulks were moved to Portchester Creek. Ariadne was replaced as an accommodation hulk by the old HMS Marlborough, which was renamed Vernon II and was connected by bridges to Actaeon and Vernon, jointly named Vernon I. In 1904 HMS Warrior joined the establishment as a floating workshop, power plant and wireless telegraphy school, renamed Vernon III. Meanwhile, Actaeon was renamed Vernon IV. Also in 1904 Ariadne was detached and sent to Sheerness to be used to establish a new torpedo school. She was renamed Actaeon in 1905.[1]

In wartime and onshore 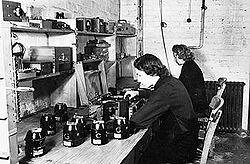 On the outbreak of the First World War Vernon was used to carry out torpedo trials and to train new recruits for the Navy. Extensive research and development was also carried to develop new anti-submarine devices, mines and ships' electrics.[1]

On 1 October 1923 Vernon was moved ashore and new departments were set up to cover aspects of maritime warfare, such as mining, torpedoes and electrical equipment. The names of the original hulks that made up the floating Vernon were used for buildings in the base. Their Chief Scientist from the beginning (probably coming from off-shore research) was Prof Edward Philip Harrison FRSE, who remained in charge until 1937. doing much to progress the advancement of magnetic mines.[3]

In the Second World War, and following on from the increasing use of mines, Vernon took on responsibility for mine disposal and developing mine countermeasures. The staff were able to capture a number of enemy mines and develop successful countermeasures. A number of officers working with Vernon were awarded Distinguished Service Orders for their successes in capturing new types of mine.[1] One of these was Lieutenant Commander John Ouvry who defuzed the first intact German magnetic mine recovered by the Allies. It had been accidentally dropped by the Luftwaffe on the sands at Shoeburyness. The incident formed an important part of an episode of The Secret War, a BBC and Imperial War Museum production.[4]

The Germans began placing booby traps in some mines to counter attempts by Vernon's staff to capture them. One exploded in a mining shed at Vernon on 6 August 1940, killing an officer and four ratings and seriously injuring a number of other personnel. To avoid a repetition of this, a nearby disused quarry, nicknamed HMS Mirtle (short for Mine Investigation Range), was used for examining mines.[1]

Portsmouth suffered heavy air raids during the war, with Vernon being hit several times. One bomb demolished Dido Building and killed 100 people. Subsequently, sections of Vernon were dispersed to quieter areas. On 3 May 1941 most departments of Vernon were moved to Roedean School at Brighton, which was known as HMS Vernon(R), whilst other elements were relocated elsewhere on the south coast and further away.[1]

On 1 October 1944 responsibility for naval diving passed from the Gunnery Branch, at HMS Excellent, to the Torpedo Branch, at Vernon. A new diving school known as Vernon(D) was established at Brixham on 27 October 1944, with administrative support in Dartmouth. The Brixham base was later joined by the Admiralty Experimental Diving Unit (AEDU) and the Deep Diving Tender HMS Tedworth. The unit remained at Brixham until 1 October 1945 when it returned to the main HMS Vernon at Portsmouth.[1]

On 10 October 1946 the recently formed Electrical Branch took over responsibility for Electrical Operations from Vernon, whilst Vernon merged with the Anti-Submarine Branch, which had been based at HMS Osprey at Portland. The merger resulted in the formation of the Torpedo and Anti-Submarine (TAS) Branch, which assumed responsibility for naval diving. The TAS Branch remained at Vernon until mid 1974, when it was moved to become part of HMS Dryad prior to the formation of the Operations Branch the following year. Vernon housed the RN Diving School, training Clearance Divers for the Fleet Clearance diving teams and minehunters. The establishment was also the home of the "Dunker" Helicopter and Fixed Wing Aircraft Escape Training, until a new facility was opened at RNAS Yeovilton (HMS Heron).[5]

Vernon ceased to be an independent command on 31 March 1986, when it was renamed HMS Nelson (Vernon Site), and in 1987 it was renamed HMS Nelson (Gunwharf) It became the Headquarters for the Commandant General Royal Marines for a brief period, and continued to be used for training. Mine warfare training was moved to the School of Maritime Operations (SMOPS), now part of HMS Dryad, in November 1995. The final element of the old Vernon, the diving school, was moved onto new premises on Horsea Island and Vernon ceased to exist. The figurehead of the original HMS Vernon is preserved in Portsmouth.[1]

Captains of the Torpedo School