HMS Prince of Wales (R09) is the second Queen Elizabeth-class aircraft carrier. Unlike most large aircraft carriers, Prince of Wales is not fitted with catapults and arrestor wires, and is instead designed to operate V/STOL aircraft; the ship is currently planned to carry up to 40 F-35B Lightning II stealth multirole fighters and Merlin helicopters for airborne early warning and anti-submarine warfare, although in surge conditions the class is capable of supporting 70+ F-35B.[13] The design emphasises flexibility, with accommodation for 250 Royal Marines and the ability to support them with attack helicopters and troop transports up to and larger than Chinook size.[14]

The ship was initially planned to be either sold or mothballed due to budget cuts, but the government later decided to bring it into active service. [15] Prince of Wales was formally named in September 2017.[16]

The completed Prince of Wales began sea trials in September 2019 and first arrived at her new home base of HMNB Portsmouth in November 2019.[17] The ship was formally commissioned into the Royal Navy at a ceremony in Portsmouth on 10 December 2019.[2] The ship's commissioning date marked the 78th anniversary of the sinking of her predecessor, a World War II era battleship which was lost in action along with HMS Repulse in 1941. She is the eighth Royal Navy ship to have the name HMS Prince of Wales. Construction of the ship began in 2011 at Rosyth Dockyard and ended with launch on 21 December 2017. She was handed over to the Royal Navy in 2019, and will be fully ready for front-line duties around the globe from 2023.[18]

When on operations, Prince of Wales will form a central part of a UK Carrier Strike Group, comprising escorts and support ships, with the aim to facilitate carrier-enabled power projection.[19]

In May 2020, Prince of Wales experienced flooding which the Royal Navy described as "minor". This was followed by more significant flooding in October 2020 which caused damage to her electrical cabling.[20] Prince of Wales departed Portsmouth Naval Base on sea trials on 30 April 2021.[21] 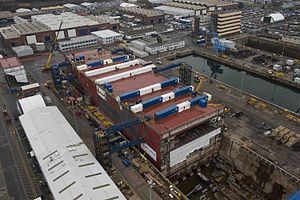 Prince of Wales under construction at Rosyth Dockyard in December 2014

The bow section of Prince of Wales in December 2014

Much like her sister ship Queen Elizabeth, the original 2008 design of Prince of Wales envisaged flying F-35B Lightning II Short Take-Off and Vertical Landing (STOVL) jets from a ski-jump ramp. However, in May 2010, the government published its long-awaited Strategic Defence and Security Review (SDSR), which stated that Prince of Wales would be converted to a Catapult Assisted Take-Off But Arrested Recovery (CATOBAR) configuration, operating the F-35C. An 18-month study commenced into the conversion but ultimately found that it would cause severe cost implications and delays. In May 2012, the government announced it would be reversing its decision to convert Prince of Wales and that the ship would be built to its original STOVL design.[22][23]

The SDSR also stipulated that the UK only required one aircraft carrier, however penalty clauses in the contract meant that cancelling Prince of Wales would be more expensive than building her. Instead, the government planned to construct Prince of Wales and then either place her into extended readiness or have her sold to an ally.[24] Contrary to this, in 2012, the Royal Navy published its annual yearbook, titled A Global Force 2012/13, which stated that both carriers are "likely to be commissioned and may even be capable of operating together".[25]

Prince of Wales was assembled at Rosyth from 52 blocks built by six shipyards around the UK. Construction began on 26 May 2011 with the first steel being cut at Govan shipyard by Defence Secretary Liam Fox.[26] In September 2014, Prince of Wales reached a final assembly phase when hull blocks LB02 and LB03 were floated into 1 Dock of Rosyth dockyard, Scotland.[27]

During the 2014 NATO Summit in Wales, Prime Minister David Cameron announced that Prince of Wales would be brought into active service, rather than sold off or mothballed.[15] This was later confirmed in the government's 2015 Strategic Defence and Security Review.[28]

Prince of Wales alongside in Liverpool in 2020

In April 2016, the ship was said to be around 80% structurally complete.[29] On 1 September 2017 HMS Prince of Wales' most senior officer, Captain Ian Groom, confirmed that the carrier was now essential to fulfilling the Royal Navy's 'full carrier strike capability.'[30]

Prince of Wales was formally named on 8 September 2017 at Rosyth dockyard by The Duchess of Rothesay, the wife of the current Prince of Wales. On 21 December 2017, Prince of Wales was floated out of Rosyth drydock #1 for the first time and manoeuvred to a nearby jetty for fitting-out and further systems integration.[31][16][32] A Merlin Mk2 helicopter landed and took off six times on her flight deck on 23 September 2019.[33] Under current plans, Prince of Wales will start sea trials in 2019 and be commissioned in late 2019[34][32][35] The ship left the fitting out basin at Rosyth for the first time on 20 September 2019; initially she remained anchored in the Firth of Forth, undertaking initial engine and system tests, and waiting for the tide to allow her to pass under the bridges crossing the firth.[36] HMS Prince of Wales sailed under the Firth of Forth bridges on 22 September 2019 and began sea trials.[37]

On 16 November 2019, Prince of Wales arrived at her home base of Portsmouth for the first time, berthing at Princess Royal Jetty.[38]

On 28 February 2020, Prince of Wales arrived in her affiliated city of Liverpool for the first time on a week-long visit.[39]

In May 2020, Prince of Wales experienced flooding which the Royal Navy described as "minor". This was followed by more significant flooding in October 2020 which caused damage to her electrical cabling. She is currently confined to docks where she is expected to remain for at least six months whilst repairs are made. Her long-planned deployment to the United States to undertake her first F-35B trials has been cancelled.[40] During 2020 Prince of Wales had been at sea just 30 days, compared to 115 days for Queen Elizabeth.[41]

The two ships of the Queen Elizabeth class are each expected to be capable of carrying forty aircraft, a maximum of 36 F-35B Lightning II stealth multirole fighters and four Merlin helicopters.[42] The 2010 SDSR anticipated the routine deployment of twelve F-35Bs, but a typical warload will be 24 F-35Bs and some helicopters.[43] These could be a Maritime Force Protection package of nine anti-submarine Merlin HM2 and five Merlin Crowsnest for airborne early warning; alternatively a Littoral Manoeuvre package could include a mix of Royal Navy Commando Helicopter Force Merlin HC4, Wildcat AH1, RAF Chinooks, and Army Air Corps Apaches.[43] As of September 2013[update] six landing spots are planned, but the deck could be marked out for the operation of ten medium helicopters at once, allowing the lift of a company of 250 troops.[43] The hangars are designed for CH-47 Chinook operations without blade folding and for the V-22 Osprey tiltrotor, whilst the aircraft lifts can accommodate two Chinooks with unfolded blades.[44]

The two ships of the Queen Elizabeth class will each carry four PTBs made by Blyth-based company Alnmaritec.[45] Each 13.1 m (43 ft) long PTB carries 36 passengers and two crew to operate the vessel and is davit-launched. To enable the craft to fit into the docking area the navigation and radar masts are fitted with Linak actuators so that they can be lowered automatically from the command console. The enclosed cabin is heated and there is a set of heads forward.[46]

Defensive weapons include the Phalanx Close-In Weapons System for anti-aircraft and anti-missile defence and Miniguns for use against fast attack craft.[12] The 30mm Automated Small Calibre Guns are fitted for but not with, and not carried as of 2021.[11]

The bow section of Prince of Wales is delivered to Rosyth Dockyard in May 2014; the ship's sister Queen Elizabeth is in the dry dock behind

The Queen Elizabeth-class carrier is the eighth HMS Prince of Wales, named after the title traditionally granted to the heir apparent of the British monarch. The name was announced at the same time as that of her sister ship Queen Elizabeth.

The decommissioning of HMS Ark Royal under the SDSR in 2010 led to a campaign for one of the new aircraft carriers to receive that name.[47]

Prince of Wales was formally named on 8 September 2017 at Rosyth Dockyard on the Firth of Forth at Rosyth, Fife, Scotland by the Duchess of Rothesay.[16]