The current HMS Montrose is the eighth of the sixteen-ship Type 23 or Duke class of frigates, of the Royal Navy, named after the Duke of Montrose. She was laid down in November 1989 by Yarrow Shipbuilders on the Clyde, and was launched on 31 July 1992 by Edith Rifkind (later Lady Rifkind), wife of (later Sir) Malcolm Rifkind, Secretary of State for Defence. She was commissioned into service in June 1994.

Having once been the flagship of the 6th Frigate Squadron, Montrose became part of the Devonport Flotilla, based in Devonport Dockyard in Plymouth.[2] In 2018, it was announced that Montrose would become the first Royal Navy frigate to be forward-deployed to the UK Naval Support Facility in Bahrain.[3] The 2021 defence review announced that the ship would now be retired early, likely after her return to the U.K. from the Persian Gulf.[4]

Deployments in the 1990s include her first trip to the South Atlantic, as Falkland Islands guardship, which ended in October 1996. Her first visit to the City of Dundee was in 1993. Several NATO deployments followed.

In early 2002, Montrose returned to the Falklands on the now-renamed Atlantic Patrol Task (South) deployment, during which divers from Montrose replaced the White Ensign on Antelope, which was sunk during the Falklands War. On her return from this deployment, she conducted her first refit period (RP1), which was completed in early January 2004.

In October 2004, Montrose was one of a number of ships dispatched to the rescue of the stricken Canadian submarine Chicoutimi (an ex-Royal Navy Upholder-class submarine) which had suffered a number of fires on board, causing casualties and the loss of power in the submarine. Montrose was the first Royal Navy vessel to make contact with the boat and assisted the submarine.[5]

Montrose deployed in 2006 to the Persian Gulf on Operation Telic in the first half of 2006. After returning to the UK for personnel changes and maintenance, from 8 January to 27 July 2007, Montrose then deployed for seven months to the Mediterranean Sea as the UK contribution to the Standing NATO Maritime Group Two (SNMG2). As part of this group, she participated in NATO's Operation Active Endeavour (OAE), countering terrorist activity in the Mediterranean and preventing smuggling and other illegal activity. After Summer Leave, the ship headed to Scotland to take part in Exercise Neptune Warrior, and was visited there by Prince Michael of Kent, Honorary Rear Admiral of the Royal Naval Reserve, on 24 September 2007.

Following Operational Sea Training, Montrose deployed again to the Middle East on 12 March 2008 to join Combined Task Force (CTF) 150, operating in the Gulf of Aden and the Arabian Sea. Activity in this deployment included Exercise Khunjar Haad, a multi-national exercise held in the Gulf of Oman in May,[6] and working with Chatham, Edinburgh and RFA Argus the seizure of over 23 tonnes of illegal drugs including cocaine, hashish, amphetamines and opiates.[7] She returned home on 3 October 2008, and after operating in UK waters, commenced a £15,000,000 upkeep package at Rosyth in early 2009.

This second refit package (RP2) included a number of major capability upgrades for the ship, including the first fitting of the Royal Navy's newest command system, DNA(2), and the replacement of the two old manually-operated 30 mm guns with two 30 mm DS30M Mark 2 Guns.[8] Having rejoined the ship on 20 July 2009, the crew conducted post-refits trials until January 2010, and Montrose was formally accepted back into the fleet on 11 February 2010.

After operational sea training Montrose deployed to the Arabian Sea in Summer 2010 to conduct anti-piracy operations, highlights of which included the November 2010 destruction of a Somalian pirate ship by the ship's Lynx helicopter while on patrol off the coast of Somalia, and the disruption of several pirate attacks on merchant ships.[9]

In October 2011, Montrose deployed again to the South Atlantic,[10] during which she was due to visit Callao, Peru in March 2012, but the Peruvian government cancelled the visit, according to the Foreign Minister, as a gesture of solidarity with Argentina over the Falklands.[11] After visits to New Orleans and Bermuda in March and April 2012, Montrose returned to the UK in May 2012.[12] In July 2012, the ship acted as the escort vessel for Queen Elizabeth II during her Diamond Jubilee visit to Cowes.[13]

From September to November 2012, the ship participated in the COUGAR 12 deployment to the Mediterranean. In early 2013, the ship and crew underwent intensive training to return to the front line,[14] and then deployed as part of the COUGAR 13 task group in August 2013.[15] After the remainder of the COUGAR 13 task group returned to the UK, Montrose remained in the Middle East to act as the UK's frigate in the Persian Gulf under Operation KIPION, and conducted numerous exercises with allied nations, as well as UK-only training events such as the maintenance exercise with RFA Diligence.[16]

In 2014, Montrose was tasked to join Norwegian and Danish warships in Operation RECSYR – the mission to escort the merchant vessels removing the Syrian chemical weapons stockpile for destruction.[17] Having handed over to HMS Diamond, the ship arrived home in March 2014.[18] Subsequently, and after a high-profile London visit to celebrate 20 years since the ship's commissioning,[19] the ship was sent to the Baltic Sea to participate in BALTOPS 14, a large scale US-led multinational exercise with participation from 30 ships and submarines from 14 nations.[20]

The ship entered refit at Devonport in October 2014, was due to rejoin the Fleet in 2016, but the incomplete installation of the Sea Ceptor Missile system and a new command system prevented it.[21] Ship's staff moved back on board in March 2017 to prepare for sea trials and it was announced that Montrose would escort HMS Queen Elizabeth on her deployment to the United States for first of class flying trials in 2018.[22] Montrose returned to sea for the first time in nearly three years on 7 July 2017 to commence a period of trials and testing before undergoing operational sea training later in the year.[23] Despite the announcement in 2017, Montrose did not accompany Queen Elizabeth on her 2018 deployment; escort duties instead fell to sister HMS Monmouth.[24] Montrose instead began working up for a major three-year deployment, which would see the ship become the first frigate to be based at the Royal Navy's new support facility in Bahrain, HMS Juffair.

During a meeting with Japanese Prime Minister Shinzō Abe on 10 January 2019, it was announced that HMS Montrose would be deployed to the Pacific region to enforce sanctions against North Korea.[25]

In the summer of 2018 Montrose acted as the Fleet Readiness Escort (FRE) in the North Sea and Dover Straits, escorting Russian units as they passed through these areas. This was followed by a mini-deployment to the Baltic where she exercised with the Swedish and Finnish navies and to strengthen ties with these nations with a focus around the celebrations of the 200th anniversary of the formation of the Finnish Navy. On return to the UK, Montrose went through a period of operational sea training before deploying to the South Pacific and Far East to carry out MarSy Operations in conjunction with JIATF(S) and Freedom of Navigation Operations (FONOPS). During this time she visited Chile, Easter Island, Pitcairn Island, Tahiti, Auckland, Darwin, Singapore and Tokyo.

Montrose forward-deployed to Bahrain in April 2019, where she will remain until 2022[26] carrying out an array of joint security operations including counter-piracy, counter-narcotics and boarding operations to support allies in the region and to protect the UK's interests.[27]

In early July 2019, amid rising tensions between the United Kingdom and Iran, Montrose issued radio warnings to boats believed to belong to the Islamic Revolutionary Guard Corps Navy[28] which were attempting to impede the passage of the British commercial vessel British Heritage. US officials stated that five Iranian boats were involved, while some UK sources say only three were involved. The incident occurred in the Strait of Hormuz.[29] According to some tabloid sources, Montrose had her 30 mm deck guns trained on the Iranian boats.[28] Montrose was joined by HMS Duncan which was ordered to the Persian Gulf on 12 July 2019 in response to threats against British shipping by Iran.[30]

On 19 July 2019 Montrose warned the Islamic Revolutionary Guard by radio against the seizure of the British-flagged Stena Impero but was not close enough to prevent the seizure.[31] In September 2019, Stena Impero was released and HMS Duncan returned to Portsmouth.[32][33]

On 12 October 2019 it was reported that Montrose along with her French counterpart, Jean Bart, were able to capture 170 kilograms (370 lb) of illegal drugs. These drugs had an estimated worth of $1 million. The ships were able to catch the drug-smuggling dhow while operating in the Arabian Sea.[34]

On 22 March 2021, it was announced that Montrose as well as sister ship Monmouth would be decommissioned earlier than planned as part of defence’s Integrated Review.[35] As of 2021, Montrose remained deployed East of Suez but was scheduled to return to the UK in 2022 when she will likely be retired, five years earlier than previously planned.[26]

Visits to Dundee and Montrose

The port of Montrose is smaller than Dundee, but Montrose has called in five times. The first visit took place in November 1999, followed by four other visits, one in July 2002, when the ship was granted the Freedom of Angus by the Provost Mrs Frances Duncan, and marched through the town,[36] and six years later in November 2008, when Angus Provost Ruth Melville took the salute during a Remembrance Sunday parade in which this Freedom was exercised.[37] The ship returned to Montrose in July 2014,[38] where they exercised the Freedom of Angus in front of Provost Helen Oswald,[39] and conducted numerous engagements in the local area.[40] The ship visited for a fifth time in July 2018, welcoming members of the public on board for a brief tour of the deck.[41]

As the flagship of the 6th Frigate Squadron (or F6), many of the first commanding officers of HMS Montrose were captains, rather than commanders, as they had administrative responsibility over all the Type 23 frigates based in Devonport. The equivalent squadron for the Portsmouth-based Type 23s was the 4th Frigate Squadron. With the abolition of the frigate and destroyer squadrons in 2002/3, and their replacement by flotillas, command of Montrose reverted to that of a Commander.

Of this list, three commanding officers were subsequently promoted to vice admiral, including the husband of the Princess Royal, Timothy Laurence, who assumed command of the ship (and the 6th Frigate Squadron) on 27 August 1996. 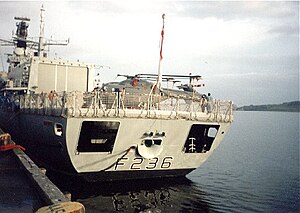 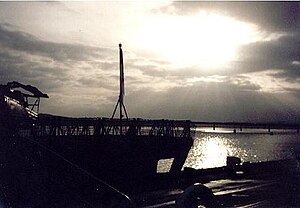 Montrose at dusk in Dundee Docks, 1998

(decorations and ranks detailed at the time of being in Command, and do not reflect subsequent promotions, or honours and awards)

Ten of the former Commanding Officers were reunited on board Montrose on 30 May 2014 at a lunch held to celebrate the 20th anniversary of the ship's commissioning, when they were invited on board while the ship was in London; the ship's sponsor, Lady Rifkind, also attended.[43]

At the end of 2014, HMS Montrose was awarded the Fleet Effectiveness Trophy for best frigate in the Royal Navy in 2014.[44]

There has only been one previous ship built with the same name, which was Montrose (D01), the first of eight Admiralty-type destroyer leaders, sometimes known as the Scott class. However, whichever tender was attached to the Tay Division of the Royal Naval Reserve was always renamed HMS Montrose in honour of James Graham, 6th Duke of Montrose, who founded the Royal Naval Volunteer Reserve in 1903; the last ship that was so named was the Ton-class minesweeper HMS Stubbington.

All of HMS Montrose battle honours were won by her WWII-era predecessor, and are as follows:

The honours board for that ship can be seen on board the preserved frigate HMS Unicorn, alongside in Dundee.[45]