HMS Lancaster is a Duke-class Type 23 frigate of the Royal Navy, launched by Queen Elizabeth II[4] on 24 May 1990. The ship is known as "The Queen's Frigate",[5] the Duke of Lancaster being a subsidiary title of the Sovereign. Being the third ship in the Type 23 class, Lancaster was originally allocated the pennant number F232 until it was noted that the 232 is the Royal Navy report form for groundings and collisions and therefore considered unlucky.[6][7] She is one of the few ships left in the fleet with some female officers but mess decks which are men-only.[8] It is quite common when she has returned from long operations that she is flown over by the Avro Lancaster bomber which is part of the Battle of Britain Memorial Flight based at RAF Coningsby.[9]

In 1994, HMS Lancaster deployed on a nine-month mission to the Caribbean Sea, and the Eastern Pacific Ocean, During this time she acted as guardship for HMY Britannia, conducted anti-drug smuggling operations and sonar trials. She also acted as guardship for Queen Elizabeth II during the Commonwealth Games in Victoria, British Columbia, Canada, in August 1994. 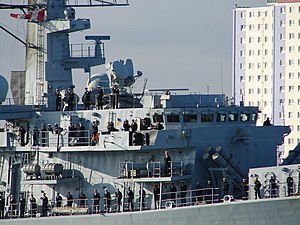 Lancaster returning from a deployment in the Persian Gulf.

Lancaster has been involved in anti-drug operations in the Caribbean, but also delivered Vice Admiral Adrian Johns in 2009 to his new post as Governor of Gibraltar. In February 2010 Lancaster was deployed in waters off the Horn of Africa as part of Combined Task Force 150, tackling piracy, drug-running, people trafficking, arms smuggling, and other criminal and terrorist threats.[10][11]

Lancaster returned to sea in early 2012 and returned to active service in Spring 2013.[8] The £17.9m contract covered upgrades to communications, the Sea Wolf and command systems,[12] the installation of a 30mm remote-operated gun[12] and a transom flap.[13] Both shafts were replaced, four refurbished diesel generators installed and new paint applied to the hull.[13] The accommodation, galley and dining halls were all refurbished at the same time.[5] Half the crew returned to the ship in October 2011, under the command of Lt Cdr Charlie Guy until Cdr Steve Moorhouse takes over in November 2011.[8] Although the top speed of the Duke class is commonly quoted as 28 knots (52 km/h; 32 mph), the caption of an official Navy photo suggests that Lancaster was capable of 32 knots (59 km/h; 37 mph) even before her mid-life refit;[14] the transom flap can add up to 1 knot (1.9 km/h; 1.2 mph) to the top speed of a Type 23,[15] and the Intersleek anti-fouling paint added 2 knots (3.7 km/h; 2.3 mph) to the top speed of Ark Royal.[16]

In July to August 2013, she was on a counter-narcotics mission in the Caribbean, seizing a 680-kilogram (1,500 lb) haul of cocaine with an estimated street value of £100 million after sailors and an embarked U.S. Coast Guard Law Enforcement Detachment boarded a speedboat near Puerto Rico.[17][18]

On 23 March 2015, Lancaster became the first ship in the Royal Navy to deploy with the navy's new uniform and Wildcat helicopter.[19]

The crew of the Lancaster gathered on the deck of the vessel to spell the word sister, as a present from the Royal Navy, on the birth of Princess Charlotte of Cambridge on 2 May 2015.[20]

Between 12 and 16 October 2015 Lancaster and RFA Gold Rover participated the bicentennial anniversary commemorations of Napoleon's arrival on Saint Helena after his defeat at the Battle of Waterloo, and subsequent surrender to British forces.[21]

In 2015, the ship visited Algiers for three days for official receptions and a short spell of training with ships in the Algerian Navy, including the Algerian amphibious transport dock Kalaat Béni Abbès. She arrived back in the UK on 17 December 2015.[22]

Upon her return to the UK, Lancaster entered a period of "extended readiness" in Portsmouth awaiting refit in 2017.[23] Lancaster departed Portsmouth on 31 March 2017 under tow for Plymouth.

HMS Lancaster underwent a life extension refit (LIFEX) at HMNB Devonport from 2017 to 2019 which included fitting of the Artisan 3D radar, Sea Ceptor anti-air missiles and strengthening the backbone of the ship.[24]