From Encyclopedia Britannia
Jump to navigation Jump to search
For other ships with the same name, see HMS Grafton.

HMS Grafton was a Type 23 frigate of the Royal Navy. She was the ninth vessel to bear the name, and is named after the Duke of Grafton.

Ordered in January 1992, Grafton was laid down on 13 May 1993 by Yarrow Shipbuilders. The frigate was launched 5 November 1994 and commissioned into the Royal Navy on 29 May 1997 with the pennant number F80.

Designed to replace the Leander class, the Type 23 frigate's operational role as an anti-submarine warfare platform. The design grew to encompass the Sea Wolf and Harpoon missile systems for air defence and anti-ship purposes respectively. They were also equipped with one BAE 4.5 inch (113 mm) Mk 8 gun.

For anti-submarine purposes they have four Sting Ray torpedo tubes. For anti-missile defence they have Seagnat and DFL3 decoy launchers.

In 2003, the ship was used in the ITV drama series Making Waves as the fictional Royal Navy warship Suffolk. In early 2004 the ship was deployed in the Persian Gulf. In July 2004, it was announced that Grafton would be one of three Type 23 frigates to be decommissioned by the end of 2006.

In June 2005, it was announced that Grafton would be sold to the Chilean Navy . During her service in the Royal Navy, her crew were awarded the freedom of the Borough of Ipswich, due to their frequent visits to the Suffolk town. On her last visit to Ipswich in 2006, the Ship's Bell was presented to the town as a permanent reminder of the links between Grafton and Ipswich. The bell is now on display in the reception area of the Ipswich Borough Council offices at Grafton House, named for the connection to the warship.[1] She was decommissioned on 31 March 2006.

For other ships with the same name, see Chilean ship Almirante Lynch. 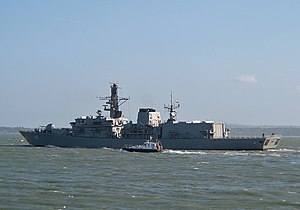 The frigate was delivered to Chilean Navy on 28 March 2007 at Portsmouth and renamed Almirante Lynch (FF-07) after Patricio Lynch.