HMS Dragon is the fourth ship of the Type 45 or Daring-class air-defence destroyers built for the Royal Navy. She was launched in November 2008 and commissioned on 20 April 2012.[17]

Dragon's construction began at the then BAE Systems Naval Ships (later BAE Systems Surface Fleet Solutions) yard at Scotstoun on the River Clyde in December 2005, and by December 2007 the bow section was in place on the Govan slipway for mating with the other modules. Dragon launched from the slipway at Govan on 17 November 2008 at 3:00pm.[18] Her sponsor was Mrs Susie Boissier, wife of Vice Admiral Paul Boissier, Deputy Commander-in-Chief Fleet and Chief of Staff.[19] She was fitted out at Scotstoun.

Dragon entered her home port of Portsmouth for the first time on 31 August 2011.[21]

Dragon off Gibraltar in 2013 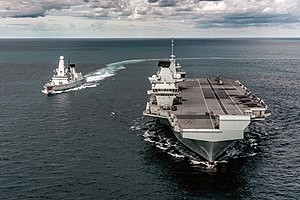 Dragon joined the Royal Navy Surface Fleet on Friday, 20 April 2012.[22] On Friday 27 April, she made her maiden visit to Liverpool, staying for three days. She opened to the public on Saturday 28 April, with visitors able to see the inside of the ship, including the operations room.

In August 2013, it was reported Dragon was sailing with the USS Nimitz carrier group in the Arabian Sea, acting as the main point ship for aircraft control.[23][24] In August 2013, several Typhoons from No. 6 Squadron RAF were exercising with Dragon and US fighters in the Gulf.[25] It sailed westward to the Eastern Mediterranean.[26]

In April 2014, Dragon was deployed to waters north of Scotland, after sailing from Portsmouth to track the Russian warship Vice-Admiral Kulakov.[27] She was part of the Royal Navy's Atlantic Patrol Tasking in late 2014, visiting places such as the South Georgia Islands, the Falkland Islands, and a transit through the Panama Canal.[28]

October 2016, Dragon tracked two Russian corvettes in the Atlantic Ocean and Bay of Biscay during a major deployment of Russian naval forces near the United Kingdom.[29]

A 26 November 2018 press-release claimed Dragon discovered a suspicious boat while on operation in the Middle East. Sailors and Royal Marines boarded the vessel, and found 148 bags containing 3,048 kg of hashish.[32]

As of March 2019, HMS Montrose will take over her current patrol role in the Middle East.[34] HMS Montrose replaced Dragon in the Persian gulf in March 2019.

Dragon features a red Welsh Dragon on each side of her bow, the only Royal Navy ship to be adorned in this way. The dragons were there when she was launched, but were removed in a 2011 refit. They were restored in 2016 following a fundraising campaign led by the British Warships Association.[35]