The great argus (Argusianus argus) is a species of pheasant from Southeast Asia.

Not to be confused with the two species of Crested argus, genus Rheinardia. 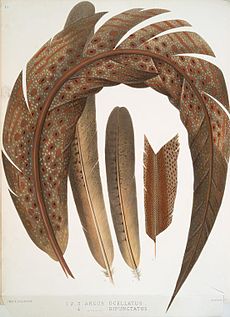 Carl Linnaeus gave the great argus its specific name (from which its common name and genus name are derived) because of the intricate eye-like patterns on its wings, in reference to Argus, a hundred-eyed giant in Greek mythology. There are two subspecies recognized: Nominate argus of the Malay peninsula and Sumatra, and A. a. grayi of Borneo. William Beebe considered the two races to be distinct species, but they have since been lumped.[citation needed]

The double-banded argus (Argusianus bipunctatus), known only from a portion of a single primary flight feather, was long considered a potential second species.[3][4] It was described in 1871 from this feather piece, found in a millinery shipment imported to London. Its origin was hypothesized to be from Java, Indonesia or Tioman Island of Malaysia, because of the great argus's absence from these locations. Parkes (1992) rejected the double-banded argus's validity and argued that it almost certainly represents a mutant form of the great argus. The IUCN, following the precautionary principle, listed this taxon as extinct until 2012. It was removed from the IUCN Red list because the IOC had removed this species from its list of valid bird taxa in 2011. While the feather is indeed quite distinct, it represents a fairly simple divergence: The entirely asymmetrically-patterned vanes are instead near-symmetrical, and both bear the darker brown shaftward area with dense whitish speckles. The shaft is thinner than usual and the feather would probably not have been useful for flight.[citation needed]

Nothing similar has come to notice ever since, and as the feather piece is not a composite of two feather halves glued together but an apparently natural specimen, a hoax or fake can be ruled out. Despite all conjecture that has been built around the feather piece, all that can be said is that at some time around 1870, an argus pheasant which bore at least one such feather was shot in an unknown location. Even if this individual was one of the last remnants of a now-extinct population, it is unlikely that only a single feather would have been taken from an unusual specimen of a well-known, often-hunted, and conspicuous bird, and that this single feather would have then been bundled into a shipment of normal great argus feathers. The feather is now housed in the Natural History Museum in London.[citation needed]

Though the great argus is not as colorful as other pheasants, its display surely ranks among the most remarkable.[according to whom?] The male clears an open spot in the forest and prepares a dancing ground. He announces himself with loud calls to attract females, then he dances before her with his wings spread into two enormous fans, revealing hundreds of "eyes" while his real eyes are hidden behind it, staring at her.[8]

Despite displays similar to polygamous birds and though the great argus was thought to be polygamous in the wild, it has been discovered that it is actually monogamous.[9]

It feeds on the forest floor in early morning and evening. Unusual among Galliformes, the great argus has no uropygial gland and the hen lays only two eggs.[10]

The great argus is native to the jungles of Borneo, Sumatra and the Malay Peninsula in southeast Asia.[1]

Due to ongoing habitat loss and to being hunted in some areas, the great argus is evaluated as Vulnerable on the IUCN Red List.[1] It is listed on Appendix II of CITES.