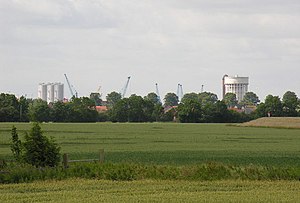 The Port from Green Fields, Goole 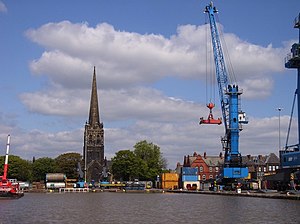 According to the 2011 UK census, Goole parish had a population of 19,518,[1] an increase on the 2001 UK census figure of 17,600.[2] The port, which is the UK's furthest inland port, is highly versatile and capable of handling nearly 2 million tonnes of cargo per annum, making it one of the most important ports on the east coast of England.[3]

Unusually for an English place-name, "Goole" has its origins in Middle English. It derives from the word goule, meaning "stream" or "channel", or possibly "outlet drain".[4] Not recorded in the Domesday Book, its first mention was in 1362 as Gulle.[4] 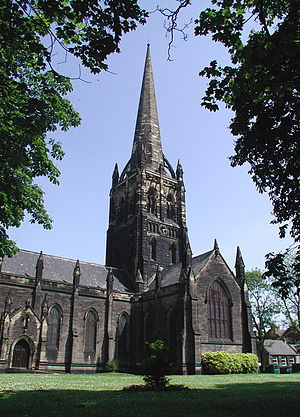 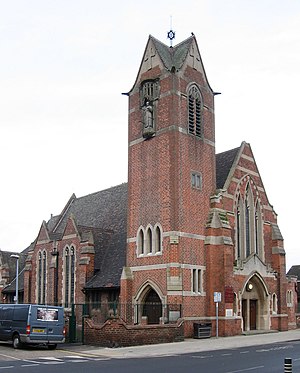 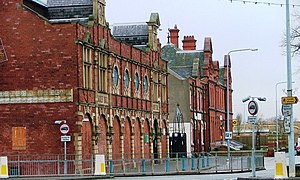 The Dutch civil engineer Cornelius Vermuyden diverted the River Don northwards to the River Ouse in 1626–1629, to drain the marshland of Hatfield Chase at the behest of King Charles I.[4] It made the new lower Don – known as the Dutch River – navigable for barges, so that coal from the South Yorkshire Coalfield could be transported to the new confluence, for transfer to seagoing vessels. There the engineers built a new wooden bridge – rebuilt in iron in the 1890s, and now known as the Dutch River Bridge – where to its east formed a new village called "Goole".[4] 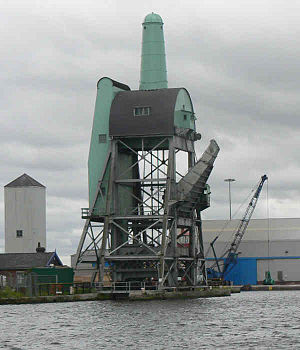 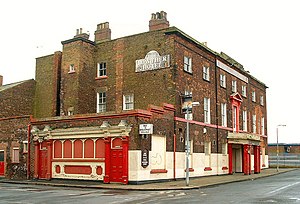 The Lowther Hotel, reputedly the first building constructed in New Goole in 1824, opened as the Banks Arms Hotel, named after Sir Edward Banks a contractor for the Aire and Calder Navigation company.

In the 1820s, the Aire and Calder Navigation company proposed development of a new canal to transport coal, from existing broad canal from Knottingley in the northern sector of the coalfield in 1826. Once it reached Goole, the company proposed development of a new floating dock, capable of handling larger sea-going vessels. Chief engineer Thomas Hamond Bartholomew was instructed to build the canal, docks and an associated company town to house both the dock workers and visiting seamen.[4] Bartholomew commissioned civil engineer and builder Sir Edward Banks company to construct part of the canal and the eight transshipment docks, and to lay out the associated new town to the west of the existing wooden bridge. Resultantly, the "Banks Arms Hotel" on Aire Street – today known as the "Lowther Hotel" – was in 1824 the first building constructed in what was known as "New Goole"; The Macintosh Arms public house on the same street took its name from engineer Hugh Macintosh.[4]

Three locks keep the water in 37 acres (150,000 m2) of floating docks at a constant depth of 6 metres (20 ft), by preventing the level from rising and falling with the tides in the River Ouse. Once ships are within the complex, eight docks provide a total quayside of 3 miles (4.8 km). Beside the docks are transit sheds where cargo is stored, many of which are equipped with overhead cranes.[4] Unlike many ports, every one of the eight docks has been in full, commercial operation since its construction in the period from 1826 to 1912.

William Hamond Bartholomew succeeded his father T. H. Bartholomew in 1853 and introduced the Tom Pudding system of compartment boats, which could carry around 40 long tons (41,000 kg) of coal in 1863. On reaching the docks, the barges were lifted by large hoists, from which they could be discharged directly into seagoing ships, a system which proved so successful that it competed against rail until 1985.[6]

For most of its life, the port was most associated with the shipment of coal, and associated cargoes including the importation of pit props. With the demise of the mining industry, the former Timber Pond is now a marina, trading under the name Goole Boathouse. It has berths for 150 boats.

After a period of decline, commodities were replaced by containers, the export of steel, and the import of timber from north-eastern Europe. Today the Port of Goole has regular cargo liner services to Norway, Sweden, Finland, Germany, the Netherlands, Belgium, France, Spain, Morocco and South Africa; plus a transshipment route to Europort, Rotterdam. 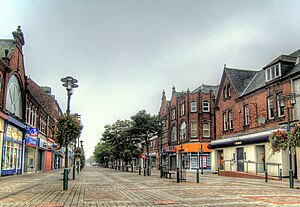 Glass is produced in Goole, which is also the centre of an agricultural district. The town's former large employer was in clothing manufacture for the big multiples, however this ended in the late 2000s.

Goole has a modestly sized town centre with many high street shops, independent retailers and public houses. The main shopping area is Wesley Square, off Boothferry Road (which has been pedestrianised around the main shopping area). There is a modern retail development in the town centre, a leisure centre next to the docks, and the Goole and District Hospital, to the north of the town. A theatre and cinema, "Junction" opened in 2009.[7] 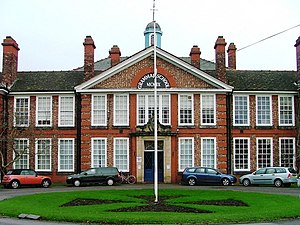 Goole has several primary schools and a High School with a Sixth Form College attached to it. Goole College is affiliated with Hull College. There are Further Education colleges in Selby, York, Scunthorpe and Bishop Burton. At Goole College there is a programme run for the older students at the High School (for the pupils in year 10 and above) to see what opportunities are held at the college. 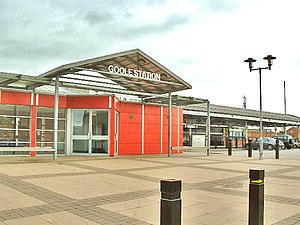 The Lancashire and Yorkshire Railway built a line from Pontefract and Wakefield in 1848, and the North Eastern Railway connected the port with Doncaster and Hull in 1870. The prosperity from the coal and general cargo trade with the West Riding industrial area continued for 150 years after the opening of the canal.

Today Goole railway station is at the junction of the Hull and Doncaster Branch and the Pontefract Line. Service is provided to Hull Paragon Interchange, Doncaster, Sheffield and Leeds, and the commuter stations in between.

Goole is south of the M62 linking it with Kingston upon Hull in the east and Leeds and the West Yorkshire urban belt in the west. To the north, the A63 road via Howden provides local access to the A19 road to Selby and York. The M18 runs west of the town, connecting it with South Yorkshire, the South and the Midlands. There are bus services to surrounding towns and villages provided by East Yorkshire Motor Services, Stagecoach in Hull and Arriva Yorkshire.[citation needed]

Goole is in the parliamentary constituency of Brigg and Goole. The constituency has been represented in the House of Commons since 2010 by Andrew Percy, a Conservative. 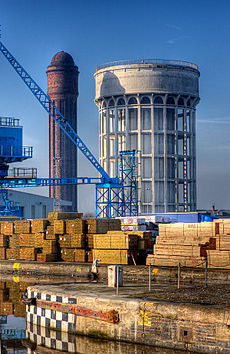 Goole's most prominent landmarks are its twin water towers, nicknamed "salt" and "pepper"—the new white water tower was the largest in Europe at the time of construction. In the winter months, Goole's gas holder on Anderson Road is visible across the north of the town. Many of the hoists and cranes on the dockside can be seen across the town. The steeple of Goole Parish Church is tall enough to be seen across the town. The town's landscape is made up mostly of utility and industrial structures. A clock tower is within the main shopping district of the town on a roundabout which is on the site of the former open-air marketplace. West Park is an Edwardian park in the town.

Goole's industrial park, Capitol Park / Goole36,[9] has attracted two large employers: Guardian Industries, which built a glass manufacturing plant, and Tesco, which built a distribution centre. The arrival of these employers resulted in hundreds of new jobs being created.[10] A new Morrisons store opened in Goole on 2 August 2010, built on land previously occupied by Timms Mill on Boothferry Road. A new railway rolling stock factory will be built at the same location during 2018/2019. The plant, which will be owned and operated by Siemens, will build the new tube trains for the Piccadilly line in London.[11] 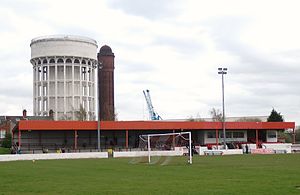 Goole Tennis Centre is a 9 court tennis club based on the Westfield Banks site.[13]

Goole has two football teams these being Goole A.F.C., and Goole United A.F.C. They currently play in the Northern Premier League Division One South and the Humber Premier League Division One respectively. They both play their football at the Victoria Pleasure Grounds which is located on Marcus Street. The nearest professional teams are Doncaster Rovers, Grimsby Town, Hull City, Leeds United, Scunthorpe United, Sheffield Wednesday, Sheffield United and York City.

Goole used to have two golf clubs (both now defunct) The early course, founded 1900, was at Rawcliffe Park. The later course was at Airmyn Park from 1911 to the Second World War.[14] Currently, Goole's nearest golf clubs are the Boothferry Golf Club in Spaldington and Drax Golf Club in Drax.

Radio Medica is a not-for-profit radio station broadcast from the Goole And District Hospital.[15]

The town is served by a weekly tabloid newspaper, The Goole Times, published since 1853 and sold in Goole and neighbouring parts of the East Riding of Yorkshire.[16]