G, or g, is the seventh letter of the ISO basic Latin alphabet. Its name in English is gee (pronounced /ˈdʒiː/), plural gees.[1]

The letter 'G' was introduced in the Old Latin period as a variant of 'C' to distinguish voiced /ɡ/ from voiceless /k/.

The recorded originator of 'G' is freedman Spurius Carvilius Ruga, sequens his addition of the letter G to the Roman alphabet during the 3rd century BC [2] He was the first Roman to open a fee-paying school, who taught around 230 BCE. At this time, 'K' had fallen out of favor, and 'C', which had formerly represented both /ɡ/ and /k/ before open vowels, had come to express /k/ in all environments.

Ruga's positioning of 'G' shows that alphabetic order related to the letters' values as Greek numerals was a concern even in the 3rd century BC. According to some records, the original seventh letter, 'Z', had been purged from the Latin alphabet somewhat earlier in the 3rd century BC by the Roman censor Appius Claudius, who found it distasteful and foreign.[3] Sampson (1985) suggests that: "Evidently the order of the alphabet was felt to be such a concrete thing that a new letter could be added in the middle only if a 'space' was created by the dropping of an old letter."[4]

George Hempl proposed in 1899 that there never was such a "space" in the alphabet and that in fact 'G' was a direct descendant of zeta. Zeta took shapes like ⊏ in some of the Old Italic scripts; the development of the monumental form 'G' from this shape would be exactly parallel to the development of 'C' from gamma. He suggests that the pronunciation /k/ > /ɡ/ was due to contamination from the also similar-looking 'K'.[5]

Eventually, both velar consonants /k/ and /ɡ/ developed palatalized allophones before front vowels; consequently in today's Romance languages, ⟨c⟩ and ⟨g⟩ have different sound values depending on context (known as hard and soft C and hard and soft G). Because of French influence, English language orthography shares this feature. 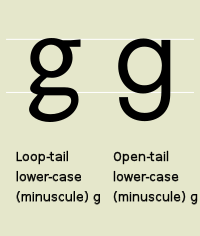 Typographic variants include a double-storey and single-storey g.

The modern lowercase 'g' has two typographic variants: the single-storey (sometimes opentail) 'g' and the double-storey (sometimes looptail) 'g'. The single-storey form derives from the majuscule (uppercase) form by raising the serif that distinguishes it from 'c' to the top of the loop, thus closing the loop and extending the vertical stroke downward and to the left. The double-storey form (g) had developed similarly, except that some ornate forms then extended the tail back to the right, and to the left again, forming a closed bowl or loop. The initial extension to the left was absorbed into the upper closed bowl. The double-storey version became popular when printing switched to "Roman type" because the tail was effectively shorter, making it possible to put more lines on a page. In the double-storey version, a small top stroke in the upper-right, often terminating in an orb shape, is called an "ear".

Generally, the two forms are complementary, but occasionally the difference has been exploited to provide contrast. In the International Phonetic Alphabet, opentail ⟨ɡ⟩ has always represented a voiced velar plosive, while ⟨

⟩ was distinguished from ⟨ɡ⟩ and represented a voiced velar fricative from 1895 to 1900.[6][7] In 1948, the Council of the International Phonetic Association recognized ⟨ɡ⟩ and ⟨

⟩ as typographic equivalents,[8] and this decision was reaffirmed in 1993.[9] While the 1949 Principles of the International Phonetic Association recommended the use of ⟨

⟩ for a velar plosive and ⟨ɡ⟩ for an advanced one for languages where it is preferable to distinguish the two, such as Russian,[10] this practice never caught on.[11] The 1999 Handbook of the International Phonetic Association, the successor to the Principles, abandoned the recommendation and acknowledged both shapes as acceptable variants.[12]

).[13][14] They write: "Despite being questioned repeatedly, and despite being informed directly that G has two lowercase print forms, nearly half of the participants failed to reveal any knowledge of the looptail 'g', and only 1 of the 38 participants was able to write looptail 'g' correctly."

In English, the letter appears either alone or in some digraphs. Alone, it represents

⟨g⟩ is predominantly soft before ⟨e⟩ (including the digraphs ⟨ae⟩ and ⟨oe⟩), ⟨i⟩, or ⟨y⟩, and hard otherwise. It hard in those derivations from γυνή (gynḗ) meaning woman where initial-worded as such. Soft ⟨g⟩ is also used in many words that came into English from medieval church/academic use, French, Spanish, Italian or Portuguese – these tend to, in other ways in English, closely align to their Ancient Latin and Greek roots (such as fragile, logic or magic). There remain widely used a few English words of non-Romance origin where ⟨g⟩ is hard followed by ⟨e⟩ or ⟨i⟩ (get, give, gift), and very few in which ⟨g⟩ is soft though followed by ⟨a⟩ such as gaol, which since the 20th century is almost always written as "jail".

The double consonant ⟨gg⟩ has the value /ɡ/ (hard ⟨g⟩) as in nugget, with very few exceptions: /ɡd͡ʒ/ in suggest and /d͡ʒ/ in exaggerate and veggies.

The digraph ⟨ng⟩ may represent

The digraph ⟨gh⟩ (in many cases a replacement for the obsolete letter yogh, which took various values including /ɡ/, /ɣ/, /x/ and /j/) may represent

The digraph ⟨gn⟩ may represent

The trigraph ⟨ngh⟩ has the value /ŋ/ as in gingham or dinghy. Non-trigraph ⟨ngh⟩ also occurs, in compounds like stronghold and dunghill.

Most Romance languages and some Nordic languages also have two main pronunciations for ⟨g⟩, hard and soft. While the soft value of ⟨g⟩ varies in different Romance languages (/ʒ/ in French and Portuguese, [(d)ʒ] in Catalan, /d͡ʒ/ in Italian and Romanian, and /x/ in most dialects of Spanish), in all except Romanian and Italian, soft ⟨g⟩ has the same pronunciation as the ⟨j⟩.

Other languages typically use ⟨g⟩ to represent /ɡ/ regardless of position.

Amongst European languages, Czech, Dutch, Finnish, and Slovak are an exception as they do not have /ɡ/ in their native words. In Dutch, ⟨g⟩ represents a voiced velar fricative /ɣ/ instead, a sound that does not occur in modern English, but there is a dialectal variation: many Netherlandic dialects use a voiceless fricative ([x] or [χ]) instead, and in southern dialects it may be palatal [ʝ]. Nevertheless, word-finally it is always voiceless in all dialects, including the standard Dutch of Belgium and the Netherlands. On the other hand, some dialects (like Amelands) may have a phonemic /ɡ/.

Faroese uses ⟨g⟩ to represent /dʒ/, in addition to /ɡ/, and also uses it to indicate a glide.

In Māori, ⟨g⟩ is used in the digraph ⟨ng⟩ which represents the velar nasal /ŋ/ and is pronounced like the ⟨ng⟩ in singer.

In older Czech and Slovak orthographies, ⟨g⟩ was used to represent /j/, while /ɡ/ was written as ⟨ǧ⟩ (⟨g⟩ with caron).