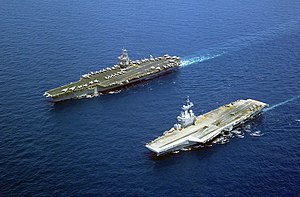 A fleet carrier is an aircraft carrier designed to operate with the main fleet of a nation's navy. The term was developed during World War II, to distinguish it from the escort carrier and other less capable types.[1] In addition to many medium-sized carriers, supercarriers, as well as some light carriers, are also classed as fleet carriers.[2]

Aircraft carriers evolved in the years between World War I and World War II. Flight decks were installed on several different types of ships to explore the possibilities of operating naval aircraft without the performance limitations of flotation devices required for seaplanes and flying boats. The most successful of these early aircraft carriers were built from battlecruisers. Battlecruisers typically had a speed of about 30 knots (56 km/h), which was several knots faster than the speed of contemporary battleships. Additional speed was not necessary for maintaining station with the battle fleet, but enabled the carrier to catch up with the battle fleet after temporarily leaving formation to turn into the wind for launch or recovery of aircraft. The speed of the carrier during launch effectively decreased the takeoff distance for embarked aircraft, so faster carriers could operate heavier aircraft with greater range and superior combat capability. As such naval aircraft became operational, no nation could risk fielding less capable aircraft; so the speed of later purpose-designed aircraft carriers was set by the speed of the converted battle cruisers. The Washington Naval Treaty of 1922 limited the displacement of purpose-designed aircraft carriers to 23,000 tons.[3]

The idea of a modern fleet carrier was developed in 1931 by Admirals J.J. Clark and Harry E. Yarnell of the United States Navy. Fleet carriers, instead of operating as scouts for the fleet, would operate in unison with the fleet, to ward off air attacks and to strike opposing forces from the air. Cruisers and destroyers would protect fleet carriers. The fleet carriers would then displace battleships as the preeminent assets of the surface fleet.[4] A fleet carrier would carry more than 50 aircraft, and be fast enough to keep up with other major elements of the fleet, such as cruisers and battleships.[5]

In the post-war era, the United States Navy sought to give aircraft carriers a strategic bombing capability in addition to their tactical role. The largest bombs carried by carrier aircraft during the second world war had been about 2,000 pounds (910 kg) but experience had indicated some hardened targets like submarine pens were impervious to bombs of less than 12,000 pounds (5,400 kg). The fleet carriers of World War II were incapable of operating meaningful numbers of aircraft large enough to carry such heavy bombs over anticipated distances with performance characteristics to avoid defending aircraft. The term fleet carrier then evolved to differentiate the supercarriers designed for strategic bombing roles from the older fleet carriers delegated limited tactical roles like anti-submarine (CVS) or amphibious warfare (LPH).[7]

The following is not an exhaustive list, but does provide context by comparing some examples, from three types, of fleet carriers active during WWII.

The earliest carrier aircraft were designed as fighters, scouts and gunfire observers. Torpedo bombers were developed to slow enemy ships so friendly battleships might catch and sink them. Dive bombing tactics were developed as aircraft strength improved through the 1930s, but limited aircraft capacity encouraged production of dual-purpose fighter-bombers or scout-bombers rather than dedicated dive bombers.[17] Japanese and American fleet carriers usually carried fighter squadrons, torpedo bomber squadrons, and dive bomber squadrons through World War II;[18] but British fleet carriers were less likely to include a dive bomber squadron.[19] The fleet carriers' longer range bombers were often used for the scouting role.[20]