From Encyclopedia Britannia
Jump to navigation Jump to search
This article is about the calendar day. For the South Korean film, see February 29 (film). For the Malaysian film, see 29 Februari.

February 29, also known as leap day or leap year day, is a date added to most years that are divisible by 4, such as 2016, 2020, and 2024. A leap day is added in various solar calendars (calendars based on the Earth's revolution around the Sun), including the Gregorian calendar standard in most of the world. Lunisolar calendars (whose months are based on the phases of the Moon) instead add a leap or intercalary month.[1]

A leap day is observed because the Earth's period of orbital revolution around the Sun takes approximately six hours longer than 365 whole days. A leap day compensates for this lag, realigning the calendar with the Earth's position in the Solar System; otherwise, seasons would occur later than intended in the calendar year. The Julian calendar used in Christendom until the 16th century added a leap day every four years; but this rule adds too many days (roughly three every 400 years), making the equinoxes and solstices shift gradually to earlier dates. By the 16th century the vernal equinox had drifted to March 11, so the Gregorian calendar was introduced both to shift it back by omitting several days, and to reduce the number of leap years via the aforementioned century rule to keep the equinoxes more or less fixed and the date of Easter consistently close to the vernal equinox.[1][2]

Leap days can present a particular problem in computing known as the leap year bug when February 29 is not handled correctly in logic that accepts or manipulates dates. For example, this has happened with ATMs[3] and Microsoft's cloud system Azure.[4]

Although most modern calendar years have 365 days, a complete revolution around the Sun (one solar year) takes approximately 365 days, 5 hours, 48 minutes, and 46 seconds (or, for simplicity's sake, approximately 365 days and 6 hours, or 365.25 days).[5] An extra 23 hours, 15 minutes, and 4 seconds thus accumulates every four years (again, for simplicity's sake, approximately an extra 24 hours, or 1 day, every four years), requiring that an extra calendar day be added to align the calendar with the Sun's apparent position. Without the added day, in future years the seasons would occur later in the calendar, eventually leading to confusion about when to undertake activities dependent on weather, ecology, or hours of daylight.

The Gregorian calendar repeats itself every 400 years, which is exactly 20,871 weeks including 97 leap days (146,097 days). Over this period, February 29 falls on Sunday, Tuesday, and Thursday 13 times; Friday and Saturday 14 times; and Monday and Wednesday 15 times. Except for a century mark that is not a multiple of 400, consecutive leap days fall in order Sunday, Friday, Wednesday, Monday, Saturday, Thursday, Tuesday, and repeats again. 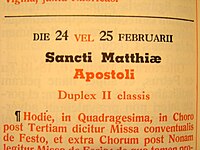 The calendar of the Roman king Numa Pompilius had only 355 days (even though it was not a lunar calendar) which meant that it would quickly become unsynchronized with the solar year. An earlier Roman solution to this problem was to lengthen the calendar periodically by adding extra days to February, the last month of the year. February consisted of two parts, each with an odd number of days. The first part ended with the Terminalia on the 23rd, which was considered the end of the religious year, and the five remaining days formed the second part. To keep the calendar year roughly aligned with the solar year, a leap month, called Mensis Intercalaris ("intercalary month"), was added from time to time between these two parts of February. The (usual) second part of February was incorporated in the intercalary month as its last five days, with no change either in their dates or the festivals observed on them. This followed naturally, because the days after the Ides (13th) of February (in an ordinary year) or the Ides of Intercalaris (in an intercalary year) both counted down to the Kalends of March (i.e. they were known as "the nth day before the Kalends of March"). The Nones (5th) and Ides of Intercalaris occupied their normal positions.

When it was thought necessary to add (every two years) an intercalary month of 22 or 23 days, so that the civil year should correspond to the natural (solar) year, this intercalation was in preference made in February, between Terminalia [23rd] and Regifugium [24th].[9]

The set leap day was introduced in Rome as a part of the Julian reform in the 1st century BCE. As before, the intercalation was made after February 23. The day following the Terminalia (February 23) was doubled, forming the "bis sextum"—literally 'twice sixth', since February 24 was 'the sixth day before the Kalends of March' using Roman inclusive counting (March 1 was the Kalends of March and was also the first day of the calendar year). Inclusive counting initially caused the Roman priests to add the extra day every three years instead of four; Augustus was compelled to omit leap years for a few decades to return the calendar to its proper position. Although there were exceptions, the first day of the bis sextum (February 24) was usually regarded as the intercalated or "bissextile" day since the 3rd century CE.[10] February 29 came to be regarded as the leap day when the Roman system of numbering days was replaced by sequential numbering in the late Middle Ages,[citation needed] although this has only been formally enacted in Sweden and Finland. In Britain, the extra day added to leap years remains notionally the 24th, although the 29th remains more visible on the calendar.[11]

A person born on February 29 may be called a "leapling", a "leaper", or a "leap-year baby".[12] Some leaplings celebrate their birthday in non-leap years on either February 28 or March 1, while others only observe birthdays on the authentic intercalary date, February 29.

The effective legal date of a leapling's birthday in non-leap years varies between jurisdictions.

In the United Kingdom and its former colony Hong Kong, when a person born on February 29 turns 18, they are considered to have their birthday on March 1 in the relevant year.[13][14]

In New Zealand, a person born on February 29 is deemed to have their birthday on February 28 in non-leap years, for the purposes of Driver Licensing under §2(2) of the Land Transport (Driver Licensing) Rule 1999.[15] The net result is that for drivers aged 75, or over 80, their driver licence expires at the end of the last day of February, even though their birthday would otherwise fall on the first day in March in non-leap years. Otherwise, New Zealand legislation is silent on when a person born on February 29 has their birthday, although case law[16] would suggest that age is computed based on the number of years elapsed, from the day after the date of birth, and that the person's birth day then occurs on the last day of the year period. This differs from English common law where a birthday is considered to be the start of the next year, the preceding year ending at midnight on the day preceding the birthday. While a person attains the same age on the same day, it also means that, in New Zealand, if something must be done by the time a person attains a certain age, that thing can be done on the birthday that they attain that age and still be lawful.

In Taiwan, the legal birthday of a leapling is February 28 in common years:

Thus, in England and Wales or in Hong Kong, a person born on February 29 will have legally reached 18 years old on March 1. If they were born in Taiwan they legally become 18 on February 28, a day earlier.

In the United States, according to John Reitz, a professor of law at the University of Iowa, there is no "... statute or general rule that has anything to do with leap day."[18] Reitz speculates that "March 1 would likely be considered the legal birthday in non-leap years of someone born on leap day,"[18] using the same reasoning as described for the United Kingdom and Hong Kong. However, for the purposes of Social Security, a person attains the next age the day before the anniversary of birth. Therefore, Social Security would recognize February 28 as the change in age for leap year births, not March 1.[19]

There are many instances in children's literature where a person's claim to be only a quarter of their actual age turns out to be based on counting only their leap-year birthdays.[citation needed]

A similar device is used in the plot of Gilbert and Sullivan's 1879 comic opera The Pirates of Penzance: as a child, Frederic was apprenticed to a band of pirates until his 21st birthday. Having passed his 21st year, he leaves the pirate band and falls in love. However, since he was born on February 29, his 21st birthday will not arrive until he is eighty-eight (since 1900 was not a leap year), so he must leave his fiancée and return to the pirates.[20]

Since 1967, February 29 has been the official birthday of Superman, but not Clark Kent.[21]

There is a popular tradition known as Bachelor's Day in some countries allowing a woman to propose marriage to a man on February 29.[33] If the man refuses, he then is obliged to give the woman money[34] or buy her a dress. In upper-class societies in Europe, if the man refuses marriage, he then must purchase 12 pairs of gloves for the woman, suggesting that the gloves are to hide the woman's embarrassment of not having an engagement ring. In Ireland, the tradition is supposed to originate from a deal that Saint Bridget struck with Saint Patrick.[35][36]

In the town of Aurora, Illinois, single women are deputized and may arrest single men, subject to a four-dollar fine, every February 29.[37][38]

In Greece, it is considered unlucky to marry on a leap day.[39]