Load lines, by showing how low a ship is sitting in the water, make it possible to determine displacement

The displacement or displacement tonnage of a ship is its weight, expressed in long tons of water its hull displaces. It is measured indirectly using Archimedes' principle by first calculating the volume of water displaced by the ship then converting that value into tons.

Ship displacement varies by a vessel's degree of load, from its empty weight as designed (known as "Lightweight tonnage"[1]) to its maximum load. Numerous specific terms are used to describe varying levels of load and trim, detailed below.

Ship displacement should not be confused with measurements of volume or capacity typically used for commercial vessels, such as net tonnage, gross tonnage, or deadweight tonnage.

Shipboard stability programs can be used to calculate a vessel's displacement

The process of determining a vessel's displacement begins with measuring its draft[2] This is accomplished by means of its "draft marks" (or "load lines"). A merchant vessel has three matching sets: one mark each on the port and starboard sides forward, midships, and astern.[2] These marks allow a ship's displacement to be determined to an accuracy of 0.5%.[2]

The draft observed at each set of marks is averaged to find a mean draft. The ship's hydrostatic tables show the corresponding volume displaced.[3] To calculate the weight of the displaced water, it is necessary to know its density. Seawater (1025 kg/m3) is more dense than fresh water (1000 kg/m3);[4] so a ship will ride higher in salt water than in fresh. The density of water also varies with temperature.

Devices akin to slide rules have been available since the 1950s to aid in these calculations. It is done today with computers.[5]

Displacement is usually measured in units of tonnes or long tons.[6] 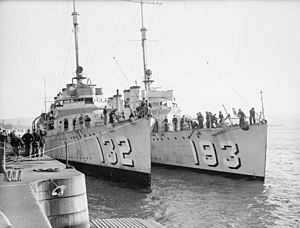 Two similar destroyers berthed alongside each other. The one on the outboard is more heavily loaded and displaces more water.

There are terms for the displacement of a vessel under specified conditions: