A depot ship is an auxiliary ship used as a mobile or fixed base for submarines, destroyers, minesweepers, fast attack craft, landing craft, or other small ships with similarly limited space for maintenance equipment and crew dining, berthing and relaxation. Depot ships may be identified as tenders in American English. Depot ships may be specifically designed for their purpose or be converted from another purpose.

Submarine depot ship HMAS Platypus with a flotilla of submarines

Services provided by a depot ship depend upon whether typical client warship missions are measured in hours, or days, or weeks. A warship crew may be expected to remain at their stations for missions measured in hours, but longer missions may require provisions for dining, sleeping, and personal hygiene. The crew of small warships may carry individual combat rations and urinate or defecate from the weather deck. Longer missions typically require storage provisions for drinking water and preserved food, and some resting area for the crew, although rest may be limited to a sheltered spot to sit or recline. Cooking may be limited to warming food on an exhaust vent, and buckets may be used for bathing, laundry, and sanitary waste. Habitability standards vary among navies, but client warships large enough to include a head, bunks, a shower, a kitchen stove, refrigerated food storage, a drinking water distillation unit, and a laundry require little more than medical and repair service from a depot ship. Depot ships are similar to repair ships, but provide a wider range of services to a smaller portion of the fleet. Depot ships undertake repair work for a flotilla of small warships, while repair ships offer more comprehensive repair capability for a larger variety of fleet warships. Depot ships also provide personnel and resupply services for their flotilla. Some depot ships may transport their short-range landing or attack craft from home ports to launch near the scene of battle.[4] The following summary of World War II depot ships indicates the range of locations and warships served:

Requisitioned merchant ships HMS Aberdonian (F74) and Vienna (F138) and the French Belfort (U63) were used as depot ships for Coastal Forces of the Royal Navy. Aberdonian started at Fort William, Scotland, but spent most of the war at Dartmouth, Devon, while Vienna was in the Mediterranean. The Loch-class frigates Loch Assynt (K438) and Loch Torridon (K654) became coastal forces depot ships HMS Derby Haven and Woodbridge Haven, respectively.[5] 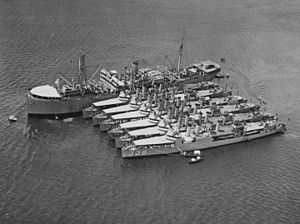 HMS Sandhurst (F92) was a converted merchant ship used as a depot ship for coastal convoy escorts at Dover, Derry and Greenock.[8]

Tsingtau and Tanga were depot ships for the 1st and 2nd E-boat flotillas at Kiel and Hamburg, respectively.[13] Kamikaze Maru, Nihonkai Maru, Shinsho Maru and Shuri Maru were requisitioned from civilian service as depot ships for Japanese Motor Torpedo Boats.[14]

HMS Marshal Soult and the French ships Courbet, Paris, Coucy and Diligente were used as depot ships for vessels patrolling the English Channel after the Second Armistice at Compiègne.[5] HMS BrilliantHMS Brilliant (1891) was based at Lerwick, Shetland Islands, in July 1917 as a depot ship for trawlers and patrol boats. HMS Ambitious was a depot ship at Scapa Flow, Orkney Islands during the First World War.

Includes both Seaplane carriers and ships intended to support the operation of large Flying boats, known as seaplane tenders in United States usage. 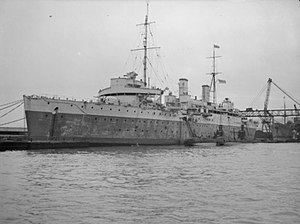 Some depot ships support a naval base. HMAS Platypus was the base ship at Darwin, Australia during World War II.[8] In the Royal Navy, under section 87 of the Naval Discipline Act 1866, the provisions of the act only applied to officers and men of the Royal Navy borne on the books of a warship. When shore establishments began to become more common it was necessary to allocate the title of the establishment to an actual vessel which became the nominal depot ship for the men allocated to the establishment and thus ensured they were subject to the provisions of the Act.[36]