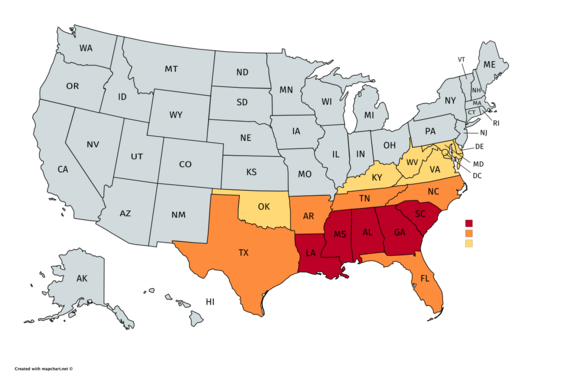 Approximate geographic definition of the Deep South and neighboring regions in the greater Southern United States. The Deep South is consistently thought to include most or all of the states shown in red and overlaps into portions of those in orange. While the Census Bureau considers those in yellow to be part of the South, they are not typically attached to the Deep South geographic label. The geology of the inner core of the region, characterized by very rich black soil that supported cotton plantations, is known as the Black Belt (geological formation). Social conditions from the perspective of historians and sociologists are covered in Black Belt in the American South.

The Deep South is a cultural and geographic subregion in the Southern United States. It was, historically, differentiated as those states most dependent on plantations and slave societies during the pre-Civil War period. It suffered economic ruin after the war, and has been a major site of racial tension following the end of Reconstruction and the adoption of Jim Crow laws. The Civil Rights Movement ushered in a new era, sometimes referred to as the New South. Before 1945, the Deep South was often referred to as the Cotton States, since cotton was the primary cash crop.[1][2]

Southern Black Belt counties with an African-American population 40% or higher.

The term "Deep South" is defined in a variety of ways:

Though often used in history books to refer to the seven states that originally formed the Confederacy, the term "Deep South" did not come into general usage until long after the Civil War ended. Up until that time, "Lower South" was the primary designation for those states. When "Deep South" first began to gain mainstream currency in print in the middle of the 20th century, it applied to the states and areas of Georgia, southern Alabama, northern Florida, Mississippi, north Louisiana, southern Arkansas and East Texas, all historic areas of cotton plantations and slavery.[9] This was the part of the South many considered the "most Southern".[10]

Later, the general definition expanded to include all of South Carolina, Georgia, Alabama, Mississippi, and Louisiana, and often taking in bordering areas of East Texas and North Florida. In its broadest application today, the Deep South is considered to be "an area roughly coextensive with the old cotton belt from eastern North Carolina through South Carolina west into East Texas, with extensions north and south along the Mississippi".[7]

After the Civil War, the region was poor. After Reconstruction ended in 1877, a small fraction of the white population comprised the wealthy landowners, merchants and bankers who controlled the economy and, largely, the politics. Most white farmers were poor and had to do manual work on their farms to survive. As prices fell, their work became harder and longer because of a change from largely self-sufficient farms, based on corn and pigs, to the growing of a cash crop of cotton or tobacco. Cotton cultivation took twice as many hours of work as raising corn. The farmers lost their freedom to determine what crops they would grow, ran into increasing indebtedness, and many were forced into tenancy or into working for someone else. There was some out-migration, especially to Texas, but generally the population grew relentlessly and the farms were subdivided smaller and smaller. Growing discontent helped give rise to the Populist movement around 1890. It represented a sort of class warfare, in which the poor farmers were the losers.[11][12]

Further information: Racism in the United States and African-American history

Race relations were tense and white supremacy was a significant factor as imposed by the white Redeemers after 1877.[13]. The 1200 lynchings in the Deep South in the 1880-1930 half-century comprised a majority of all American lynchings.[14] After 1950, the region became a major locale for the civil rights movement, most famously the operations of the Student Nonviolent Coordinating Committee (SNCC) and Martin Luther King, and the Freedom Summer in 1964.[15][16]

The Deep South is home to eight major combined statistical areas (CSAs) with populations exceeding 1,000,000 residents. The inclusion of these cities and exclusion of others is subject to geographic and historic definitions of the region. Houston the 9th largest CSA and Atlanta the 11th largest CSA in the United States, are the Deep South's largest population centers.

In the 1980 census, of those people who identified solely by one European national ancestry, most European Americans identified as being of English ancestry in every Southern state except Louisiana, where more people identified as having French ancestry.[17][18] A significant number also have Irish and Scotch-Irish ancestry.

With regards to people in the Deep South who reported only a single European-American ancestry group in 1980, the census showed the following self-identification in each state in this region:

These figures do not take into account people who identified as "English" and another ancestry group. When the two were added together, people who self-identified as being of English with other ancestry made up an even larger portion of southerners.[19] South Carolina was settled earlier than those states commonly classified as the Deep South. Its population in 1980 included 578,338 people out of 1,706,966 people in the state who identified as "English" only, making them 33.88% of the total population, the largest national ancestry group by a large margin.

The map to the right was prepared by the Census Bureau from the 2000 census; it shows the predominant ancestry in each county as self-identified by residents themselves. Note: The Census said that areas with the largest "American"-identified ancestry populations were mostly settled by descendants of colonial English and others from the British Isles, French, Germans and later Italians. Those with African ancestry tended to identify as African American, although most African Americans also have British or Northern European ancestors.[20]

As of 2003[update], the majority of African-descended Americans in the South live in the Black Belt geographic area.[21]

Hispanic and Latino Americans started arriving in the Deep South in the 1990s, and the numbers have grown rapidly. Politically they have not been very active; most are not yet citizens.[22]

Political expert Kevin Phillips states that, "From the end of Reconstruction until 1948, the Deep South Black Belts, where only whites could vote, were the nation's leading Democratic Party bastions."[23]

From the 1870s to the early 1960s, conservative whites of the Deep South held control of state governments and overwhelmingly identified as and supported the old version of the Democratic Party.[24] The most powerful leaders belonged to the party's moderate-to-conservative wing. The Republicans also controlled many mountain districts on the fringe of the Deep South.[25]

At the turn of the 20th century, all of the Southern states, starting with Mississippi in 1890, passed new constitutions and other laws that effectively disenfranchised the great majority of blacks and sometimes many poor whites as well. Blacks were excluded subsequently from the political system entirely.[26] The white Democratic-dominated state legislatures passed Jim Crow laws to impose white supremacy, including racial segregation of public facilities.[27] In politics the region became known for decades as the "Solid South": while this disenfranchisement was enforced, all of the states in this region were one-party states dominated by white Southern Democrats. Southern representatives accrued outsized power in the Congress and the national Democratic Party, as they controlled all the seats apportioned to southern states based on total population but represented only the richer subset of their white populations.[28]

Major demographic changes ensued in the 20th century; during the two waves of the Great Migration, a total of six million African Americans left the South for the Northeast, Midwest, and West to escape the oppression and violence in the South. In some areas, white migration increased into the South, especially dating from the late 20th century. Beginning with the Goldwater–Johnson election of 1964, a significant contingent of white conservative voters in the Deep South stopped supporting national Democratic Party candidates and switched to Republicans. They still voted for many Democrats at the state and local level into the 1990s.[29]

The Republican Party in the South had been crippled by the disenfranchisement of blacks, and the national party was unable to relieve their injustices in the South. During the Great Depression and the administration of Democrat Franklin D. Roosevelt, some New Deal measures were promoted as intending to aid African Americans across the country and in the poor rural South, as well as poor whites. In the post-World War II era, Democratic Party presidents and national politicians began to support desegregation and other elements of the Civil Rights Movement, from President Harry S. Truman's desegregating the military, to John F. Kennedy's support for non-violent protests.[30] These efforts culminated in Lyndon B. Johnson's important work in gaining Congressional approval for the Civil Rights Act of 1964 and Voting Rights Act of 1965.[31] Since then, upwards of ninety percent of African Americans in the South and the rest of the nation have voted for the Democratic Party,[32] including 93 percent for Obama in 2012 and 88 percent for Hillary Clinton in 2016.[33]

White southern voters consistently voted for the Democratic Party for many years to hold onto Jim Crow Laws. Once Franklin Delano Roosevelt came to power in 1932, however, the limited southern electorate found itself supporting Democratic candidates who frequently did not share its views. Journalist Matthew Yglesias argues:

The weird thing about Jim Crow politics is that white southerners with conservative views on taxes, moral values, and national security would vote for Democratic presidential candidates who didn't share their views. They did that as part of a strategy for maintaining white supremacy in the South. [34]

Kevin Phillips states that, "Beginning in 1948, however, the white voters of the Black Belts shifted partisan gears and sought to lead the Deep South out of the Democratic Party. Upcountry, pineywoods and bayou voters felt less hostility towards the New Deal and Fair Deal economic and racial policies which agitated the Black Belts, and for another decade, they kept The Deep South in the Democratic presidential column.[35]

Wallace won very high support from Black Belt whites and no support at all from Black Belt Negroes. In the Black Belt counties of the Deep South, racial polarization was practically complete. Negroes voted for Hubert Humphrey, whites for George Wallace. GOP nominee Nixon garnered very little backing and counties where Barry Goldwater had captured 90 percent to 100 percent of the vote in 1964.[36]

Historian Thomas Sugrue attributes the political and cultural changes, along with the easing of racial tensions, as the reason why southern voters began to vote for Republican national candidates, in line with their political ideology.[37] Since then, white Southern voters have voted for Republican candidates in every presidential election except in the 1976 election when Georgia native Jimmy Carter received the Democratic nomination, the 1980 election when Carter won Georgia, the 1992 election when Arkansas native and former governor Bill Clinton won Georgia, Tennessee, Louisiana, and Arkansas, and the 1996 election when the incumbent president Clinton again won Louisiana, Tennessee and Arkansas. In 1995, Georgia Republican Newt Gingrich was elected by representatives of a Republican-dominated House as Speaker of the House.

Since the 1990s the white majority has continued to shift toward Republican candidates at the state and local levels. This trend culminated in 2014 when the Republicans swept every statewide office in the region midterm elections. As a result, the Republican party came to control all the state legislatures in the region, as well as all House seats that were not representing majority-minority districts.[38]

Presidential elections in which the Deep South diverged noticeably from the Upper South occurred in 1928, 1948, 1964, 1968, and, to a lesser extent, in 1952, 1956, 1992, and 2008. Former Arkansas Governor Mike Huckabee fared well in the Deep South in 2008 Republican primaries, losing only one state (South Carolina) while running (he had dropped out of the race before the Mississippi primary).[39]