The Jeanne d'Arc flying her paying-off pennant while returning to harbour. 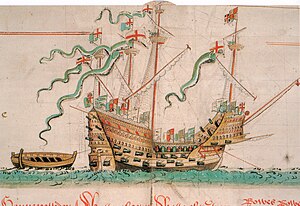 A contemporary depiction of streamers (or pennoncells) on all four masts of the warship Mary Rose which sank in 1545. Here each pennant has a cross of Saint George at the hoist and the white and green heraldic colours of the House of Tudor along the rest of its length. Illustration from the Anthony Roll.

It is said that the custom of wearing a pennant at the masthead of a man-of-war stems from Tromp's broom and Blake's whip. During the First Anglo-Dutch War (1652–54), Dutch Admiral Maarten Tromp lashed a broom to his flagship's masthead as a sign that he had swept the English off the seas. In reply, English Admiral Robert Blake hoisted a whip to the masthead to signify that he would whip the Dutchman into subjection. However, records show that pennants were in use well before this period as the mark of a warship.[1]

In the days of chivalry, knights and their squires carried pennons and pennoncells on their lances, just as men-of-war fly pennants from their masts. Records show that pennants were in use in the 13th century, when merchant ships were commandeered during war and placed in command of military officers, who transferred their trail pendants from their lances to the mastheads of the ships they commanded.[1]

The pennant is an evolution of old "pennoncell", that in the Royal Navy used to consist of three colours for the whole of its length, and towards the end left separate in two or three tails. The tradition continued until the end of the Napoleonic Wars when the Royal Navy adopted the style of pennants used by the service today. Pennants have been carried by warships from the earliest times, prior to 1653 at the yardarm, but since then at the maintopgallant masthead.[2]

Today the pennant is hoisted on the day a warship or establishment commissions and is never struck until the day of decommissioning. It is, however, displaced by Royal Standards and the personal or distinguishing flags or pennants of commodores and admirals. In Navy ships the pennant is flown at the masthead, for which reason it is also commonly referred to as a masthead pennant.

HMS Tireless: her commissioning pennant can be seen flying above and behind her white ensign

In the Royal Navy the commissioning pennant is flown continuously in every ship and establishment in commission unless displaced by a senior officer's Rank flag. The masthead pennant is a cross of St George in the hoist and a white fly.[3] Formerly, when the Royal Navy was divided into red, white and blue squadrons, there were four different pennants in use, the colour of the fly of three of the pennants corresponding with the colour of the squadron ensign, and a fourth for ships on independent commission (i.e. not attached to a squadron, therefore directly under the command of the Admiralty in London), with the fly containing (from top to bottom) red white and blue in a triband form (such ships would wear the red ensign). Modern commissioning pennants are significantly shorter than in previous centuries - typically 1m in length and only 10 cm at the hoist, tapering to a squared-off point.[3]

A boat carrying a captain of one of Her Majesty's ships will on ceremonial occasions fly a commissioning pennant from the bows of the boat as a symbol of his authority.

In the Hellenic Navy, the commissioning pennant (Greek: Επισείων Πολεμικού Πλοίου, means Warship Pennant) blue coloured, has shape of isosceles triangle elongated, bearing a white cross near the base of the triangle. The flag has typically base to length (height of triangle) 1 to 20. The cross has arms width 1/5 base length and each arm length 3/5 of base length. The pennant flown on the top of mainmast.

The ensign, jack and commission pennant are hoisted directly after the reading out of the commissioning order and struck as the final act before the captain declares the ship decommissioned.

The USN and USCG use the respective pennants as the symbol of the vessel's commanding officer.[5]

When the vessel's commanding officer is ashore, the ship will also display the international code flag known as the Third Substitute pennant. 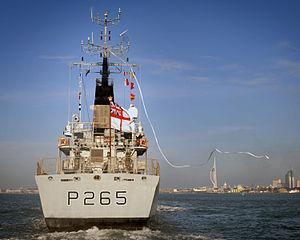 It is the custom in many navies for a ship which is "paying off" to wear an extremely long commissioning pennant, which is normally at least the length of the ship, and the length of which reflects the length of service. This is in contrast to the modern practice of using pennants of not more than one or one-and-a-half metres for convenience.

Formerly a ship "paid off" each time she returned home after a commission overseas: the term refers to the fact that sailors were not paid until the ship returned home, to avoid desertion. The bible of Royal Navy traditions and slang, Covey Crump, emphasises:

"It should be borne in mind that the commission referred to is the length of time the ship's company has been abroad, not the ship herself: when a ship recommissions abroad a fresh commission is started; thus a commission of longer than 2¾ years is exceptional."[6]

This custom is maintained in the United States Navy, where the paying-off pennant is known as the "homeward-bound pennant". Nevertheless, present usage in the Royal Navy has degenerated to using paying-off pennants only as part of a ship's decommissioning ceremony.